The Partners section recognises that no university can achieve excellence or realise the full benefits of its work by itself. It set out our goals to build new collaborations, inform decision makers, and share the wonder and importance of STEM with schools and the local community.

Imperial’s collaborative activities got underway in 2018 with the launch of a major new research partnership to explore ways of reducing health inequalities in cities around the world. The research will be led by Imperial and University College London (UCL) and is funded by £10 million from the Wellcome Trust, collaborating with institutions in ten cities, including London.Over the course of the four-year project, the research teams will gather evidence on issues affecting the health of people in urban environments, and work with policymakers to develop evidence-based policies for equitably improving the health of billions of city dwellers.

Looking to recent international collaborations, Imperial and Beijing's Tsinghua University have lacunhed a joint seed fund to support early-stage bold scientific ideas.The Tsinghua-Imperial Research and Innovation Fund, which brings together two of the world’s leading research universities, aims to kick-start innovative research projects and concepts that are showing signs of promise but are at an early stage in development and need funding to progress.

Imperial has also partnered with France's National Center for Scientific Research (CNRS), to bring together some of the world’s leading mathematicians. The International Joint Research Unit – Unité mixte internationale – is named UMI Abraham de Moivre, after the great French mathematician, and is based at Imperial’s South Kensington campus in London. It is the first time that the CNRS has opened a UMI in the UK and it will focus on advancing understanding in areas including number theory, mathematical analysis, biomathematics and financial mathematics.

Meanwhile, at home, the NHS remains of the College’s most significant UK partners. The Academic Health Sciences Centre was formed as a collaboration between the College and Imperial College NHS Trust. In 2016, the Royal Marsden NHS Foundation Trust and the Royal Brompton & Harefield NHS Foundation Trust joined the Imperial College AHSC. The relationship between the College, the Royal Marsden and the Institute for Cancer Research was further strengthened through the award of a CRUK Major Centre. 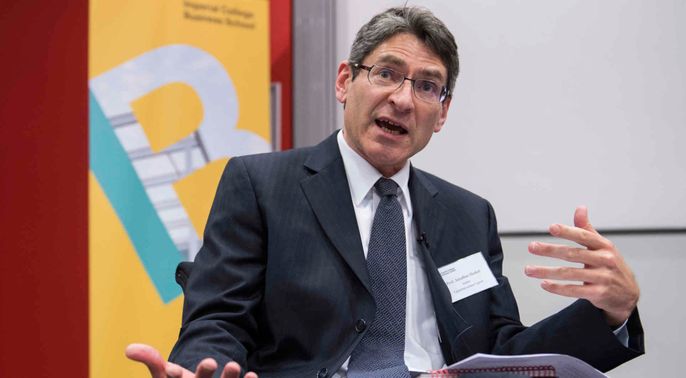 Professor Jonathan Haskel, Chair in Economics at Imperial College Business School, has collaborated with the innovation foundation Nesta, to understand how intangible assets contribute value to the modern economy. 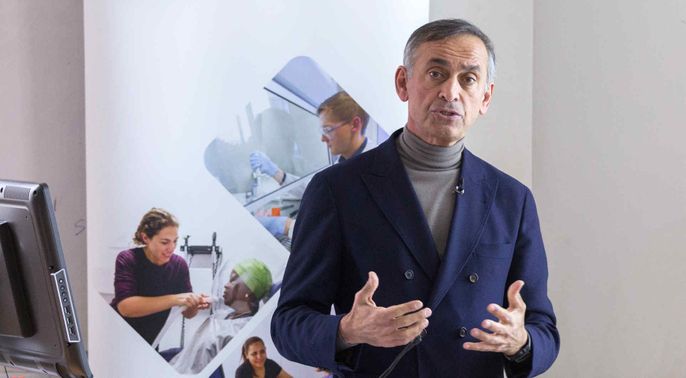 Working with DeepMind and the NHS, at team of Imperial academics led by Professor the Lord Darzi of Denham are using smartphone technology to help medics manage the thousands of individual clinical tasks that need to be organised daily across a hospital. 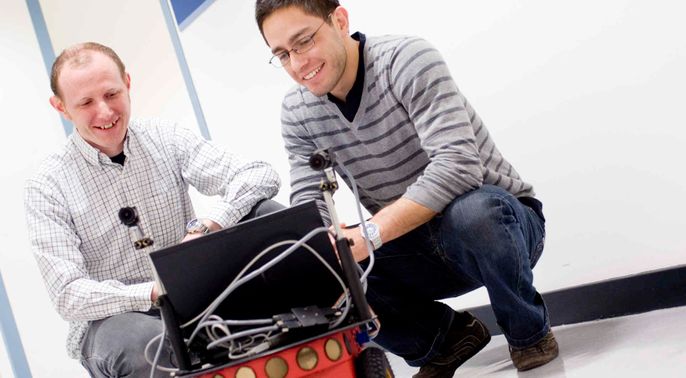 Imperial’s Professor Andrew Davison has collaborated for many years with Dyson to develop domestic robots that might perform a range of household functions such as cleaning, vacuuming and maintenance. Dyson’s robotic vacuum cleaner, the 360 Eye™, was launched commercially in 2016 and uses computer vision technology developed at Imperial to navigate its surroundings. 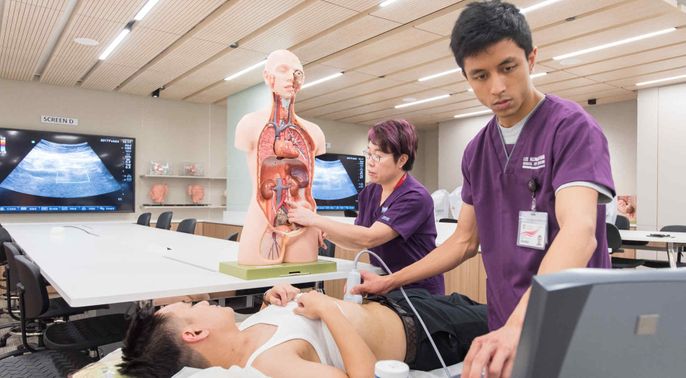 The Lee Kong Chian School of Medicine (LKCMedicine) in Singapore is a pioneering joint initiative between Imperial College London and Nanyang Technological University (NTU) which now admits around 150 students per year. As the LKCMedicine programme has developed, it’s influenced Imperial’s own medical curriculum, and students now take part in an annual exchange.

With ongoing uncertainty in the overall political climate, Imperial continues to build its capability in informing decision makers to influence policy – supported by a with a growing Public Affairs team.

In 2017, Imperial hosted 14 ministers including three Secretaries of State from key departments, including BEIS, DCMS, DFE, DFT, and FCO. The President also met with the Brexit Secretary and the Mayor, and two Deputy Mayors visited our White City Campus. In 2017, our leaders and academics appeared at, or made submissions to, 10 parliamentary inquiries and consultations, and Imperial was mentioned in Parliament 44 times.

Sage advice and A base for science 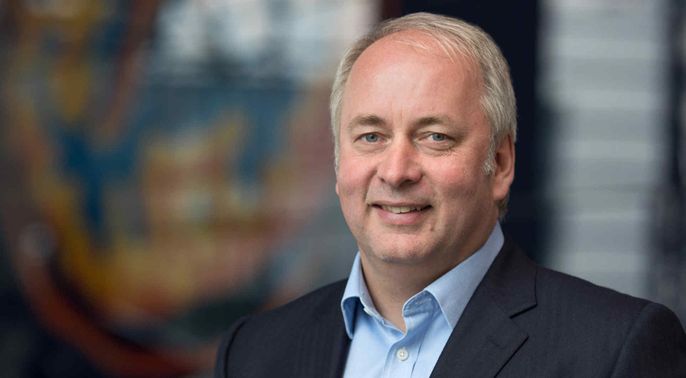 The College has around 60 leaders or academics on advisory councils and public bodies. Professor Nick Jennings, Vice-Provost for Research and Enterprise (pictured) and Professor Ian Walmsley, who is due to take up his post as Provost at Imperial in September 2018, both sit on the Council of the Engineering and Physical Sciences Research Council (EPSRC) 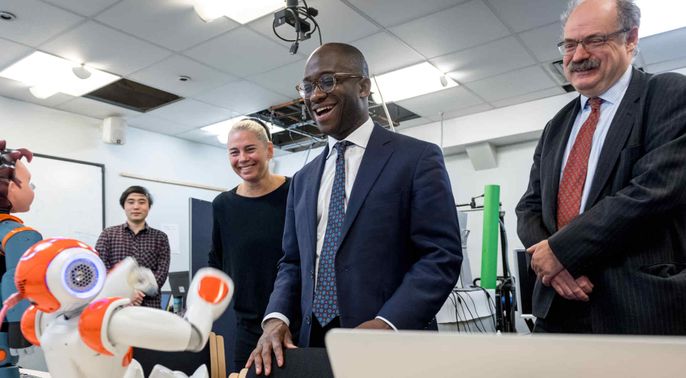 A base for science

Science and Universities Minister Sam Gyimah chose Imperial for his first official visit to a university and announced a £70 million funding boost for UK medicines. The Minister and Sir Mark Walport, the Government's Chief Scientific Adviser, praised the 'brilliant' robotics being developed at Imperial.

Sharing the wonder and importance of what we do

As Imperial continues to expand the new White City Campus in one of the most dynamic and diverse areas of London, we want to incorporate societal engagement across every aspect of our work.

We are actively working in partnership with our local communities to create opportunities and make a difference in areas such as education, employment, enterprise and health. One cornerstone of that effort is the Invention Rooms, which opened at the end of last year.

The College has invested in a renovation of the Stadium House, a former office building on Wood Lane, not far from the White City underground station, in order to create this place. With a mixture of workshops and design studios, this new facility offers hands-on experience of prototyping new products and allows members of the community to work personally and directly with our staff, students, alumni and partners to test out their creative ideas, and share in the excitement of research and innovation.

Growing engagement and Reaching out 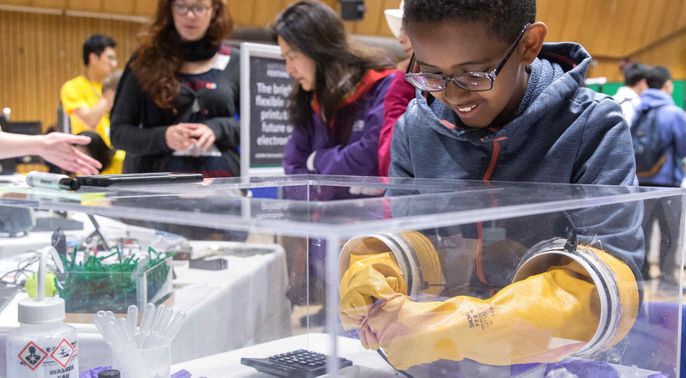 Over 20,000 people attended Imperial Festival in 2018. The College's seventh ever festival had a special nod to the 2018 Year of Engineering with the Enginuity Zone where visitors young and old took the chance to explore cutting-edge inventions. 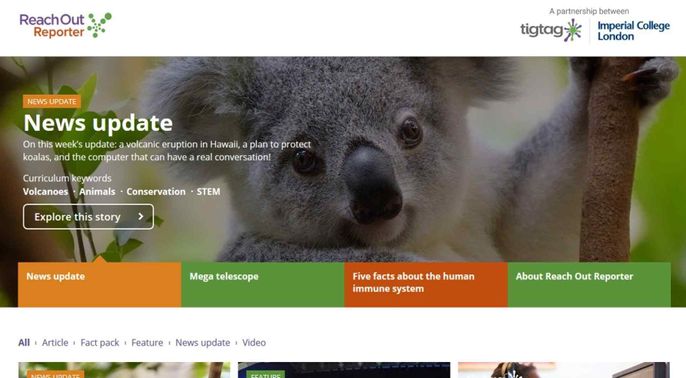 Imperial and education publisher Twig World have developed an online primary science news service, Reach-out Reporter, that helps teachers to integrate topical science into everyday teaching and learning. In 2017 the service won the award for best Free Educational Resource at the Educational Resource Awards and was named a finalist in the Education Technology Bett Awards 2018.

Wearable tech, AI and clinical teams join to change the face of trial…