The choice of the maintenance strategy for any structure will be decided by weighing the advantages of the proposed diagnostic system (e.g. reliability, probability of detection, monitoring of blind zones, fast interrogation) against its disadvantages (added weight and complexity, probability of false alarm and miss-detection, sensor integrity under environmental and operational conditions). This is particularly important for condition based maintenance (SHM systems) where the structural diagnosis and prognosis are carried out by utilizing the recorded sensor data. Therefore, optimal sensor number and location is a key parameter in the design of any SHM system.

Optimization for impact detection and identification:

The fitness function used in the optimization, must be representative of the performance of the impact detection algorithm as well as the structural response. For impact detection, this is chosen as the error in localization.For a large structure with a great possibility of sensor number and location it is computationally expensive, to carry out an exhaustive search to find the optimal sensor network. Therefore, Genetic Algorithm (GA) is often employed to reduce the computational cost of the problem.

The sensor optimization, however, is not a deterministic problem and the effect of uncertainties associated to sensor data must be included in the optimization strategy. Therefore our group has developed GA based optimization strategy used with ANN and including uncertainty in terms of added noise to the sensor data. Another method to include the uncertainties in the sensor data is by adopting a Bayesian approach. In addition, the failure of one or more sensors as well as non-uniform probability of impact occurrence in the structure have been included in the optimisation approach which presents a more realistic scenario and increases the reliability of the decision making system. 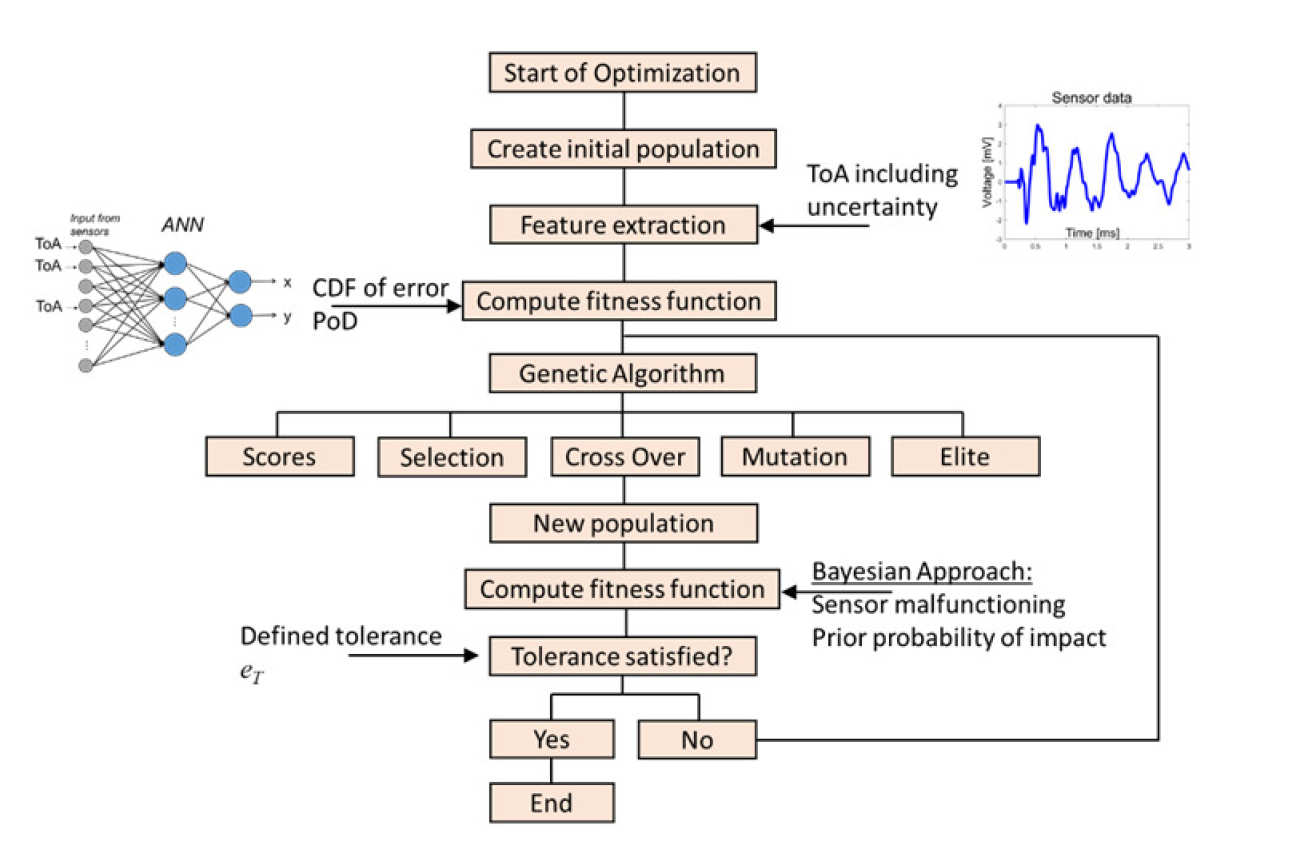 Optimization for damage detection and characterization:

A challenge for guided wave based methods, in particular for composite structures, is in separating mode-superposition and reflection of waves from boundaries and those emanating from damage. This highlights the need for determining the ideal actuation signal and optimal sensor placement, particularly in complex structures such as aircraft composite panels with stiffeners, frames, rivet holes and large man-holes. Optimal placement of sensors/actuators in order to detect, with high probability and reliability, any damage prior to it becoming critical is a key factor in uptake of any SHM system. The position of sensors can have a significant influence on the values of the damage index (DI). In an optimization problem, an objective function is required to be maximized (or minimized) which in the case of SHM application is usually the probability of detection (PoD). This means that a vast number of damage scenarios (various locations and severities) have to be analyzed for each structure under investigation in order to determine the optimal sensor configuration.

To overcome the above mentioned problem, our team have developedan optimization strategy based on Maximum Area Coverage (MAC) within a sensor network. The advantage of this approach is that it is independent of the details of the damage detection algorithm and does not require determination of a POD function for a vast number of damage scenarios. Moreover, it can be applied to geometrically complex structures with pitch-catch sensor configuration and any active sensing procedure based on time of flight of damage reflected waves, such as tomography approach or delay and sum (DAS).