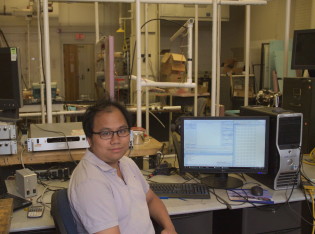 In the summer of 2017, I spent 8 weeks on a research attachment at the Department of Aeronautics and Astronautics at Massachusetts Institute of Technology (MIT), as part of the Imperial-MIT International Research Opportunities Programme (IROP).

As an international student from Singapore, I was no stranger to life in a foreign country, having stayed in London for three years. Yet for me, this was a doubly eye-opening experience, being my first foray into both life in the US as well as working in a professional research environment.

Together with a fellow undergrad from Imperial, I worked in a research team under the supervision of a PhD student. The working environment in the lab could be described as task-oriented, yet light-hearted. While the members of the research team were always focused on the work at hand, there was always casual banter being exchanged and the mood was never too stiff. In addition, there was no particular emphasis on positions or seniority, in contrast to organizations I had worked at in the past where a strict hierarchy had to be followed. Rather, each member of the team is given the autonomy and scope to decide how to approach a given task.

Although this culture demands much of the individual in terms of task planning and initiative, it also fosters a friendly and dynamic working environment, which I found both enriching and refreshing.

Apart from my work in the lab, I also spent my free time travelling to places in and around Boston, as well as other major cities on the US east coast, such as New York City and Washington, D.C. Amongst these explorations, the most unforgettable was a weekend-long trip to the majestic and beautiful Niagara Falls. As I had recently taken up an interest in photography, travel was also a great platform for me to use this skill to record and share my memories of visiting these places.

As a whole, the IROP was highly rewarding – I personally gained much more knowledge and experience than I had initially thought possible within the duration of the programme. It had given me an insightful look into the world of professional research in engineering. Above all, the time I spent in the lab showed me that the work to develop novel ideas and technologies is always ongoing in every part of the world, which is a great inspiration for me to face new challenges in the future.

"the time I spent in the lab showed me that the work to develop novel ideas and technologies is always ongoing in every part of the world, which is a great inspiration for me to face new challenges in the future"