The research activities conducted by the Transport Processes Division are:

This theme focuses primarily on the development and implementation of advanced experimental methods to characterise, via spatiotemporally resolved measurements, falling films, jet flows, as well as various regimes and patterns (e.g., annular, slug, stratified) of horizontal and vertical two- and three-phase pipe flows in lab- and pilot-scale size rigs. The flows are investigated at the test section, primarily with the application of optical diagnostic methods, which include combinations of:

These techniques allow the reliable evaluation of the nature of the investigated two-phase flows (i.e., the flow patterns/regimes from phase distribution information), together with the detailed spatiotemporally resolved measurement of key flow properties, such as phase/concentration and velocity distributions, and also of important parameters such as droplet size and wave characteristics. 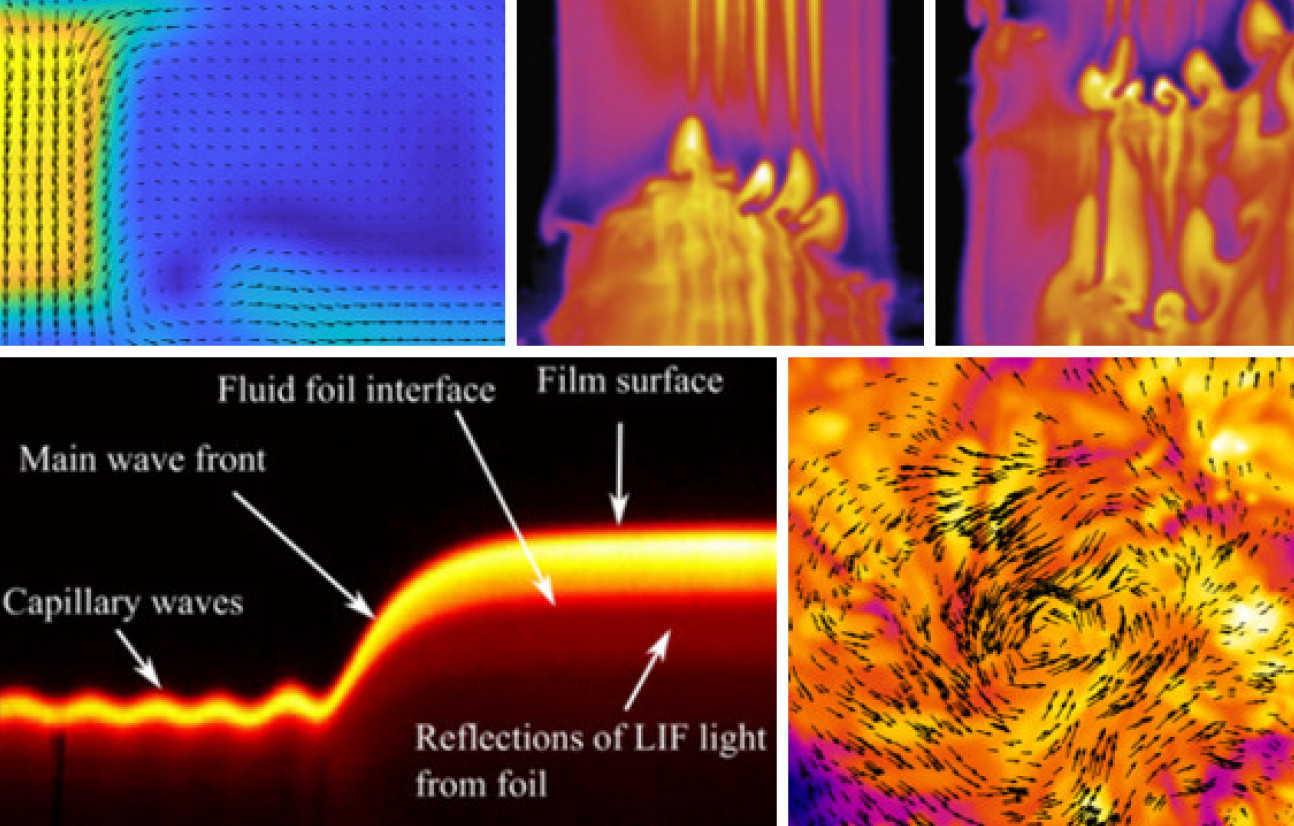 Many energy conversion and other thermal-fluid systems exhibit unsteady convective heat exchange. In such systems, generic spatiotemporal variations in the flow give rise to variations in the heat flux for a given fluid–solid temperature difference, which can be interpreted as spatiotemporal fluctuations of the instantaneous heat transfer coefficient. This theme is concerned with the phenomenon of heat transfer augmentation in unsteady and conjugate fluid–solid systems and with the development and application of advanced diagnostic methods (e.g., infrared thermography (IR-T), thermographic particle velocimetry (TPV), laser-induced fluorescence thermography (LIF-T)) to allow for detailed and unprecedented measurement capabilities. The findings can be used in the design of improved heat exchangers or thermal insulation, for example through the novel selection of materials that can exploit these augmentation effects.

Freezing and boiling in pool or flow conditions 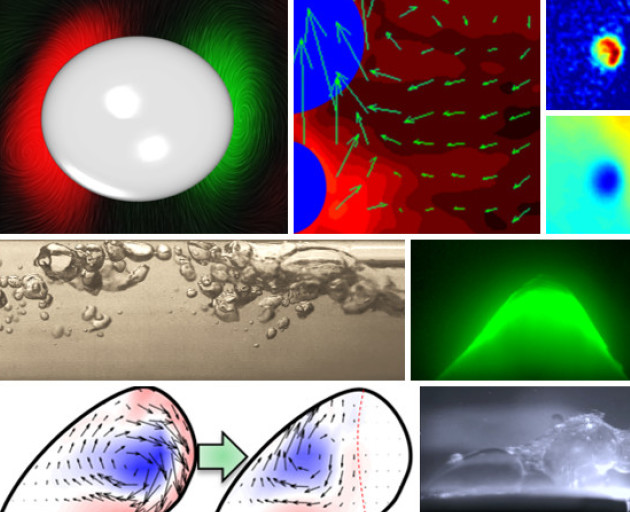 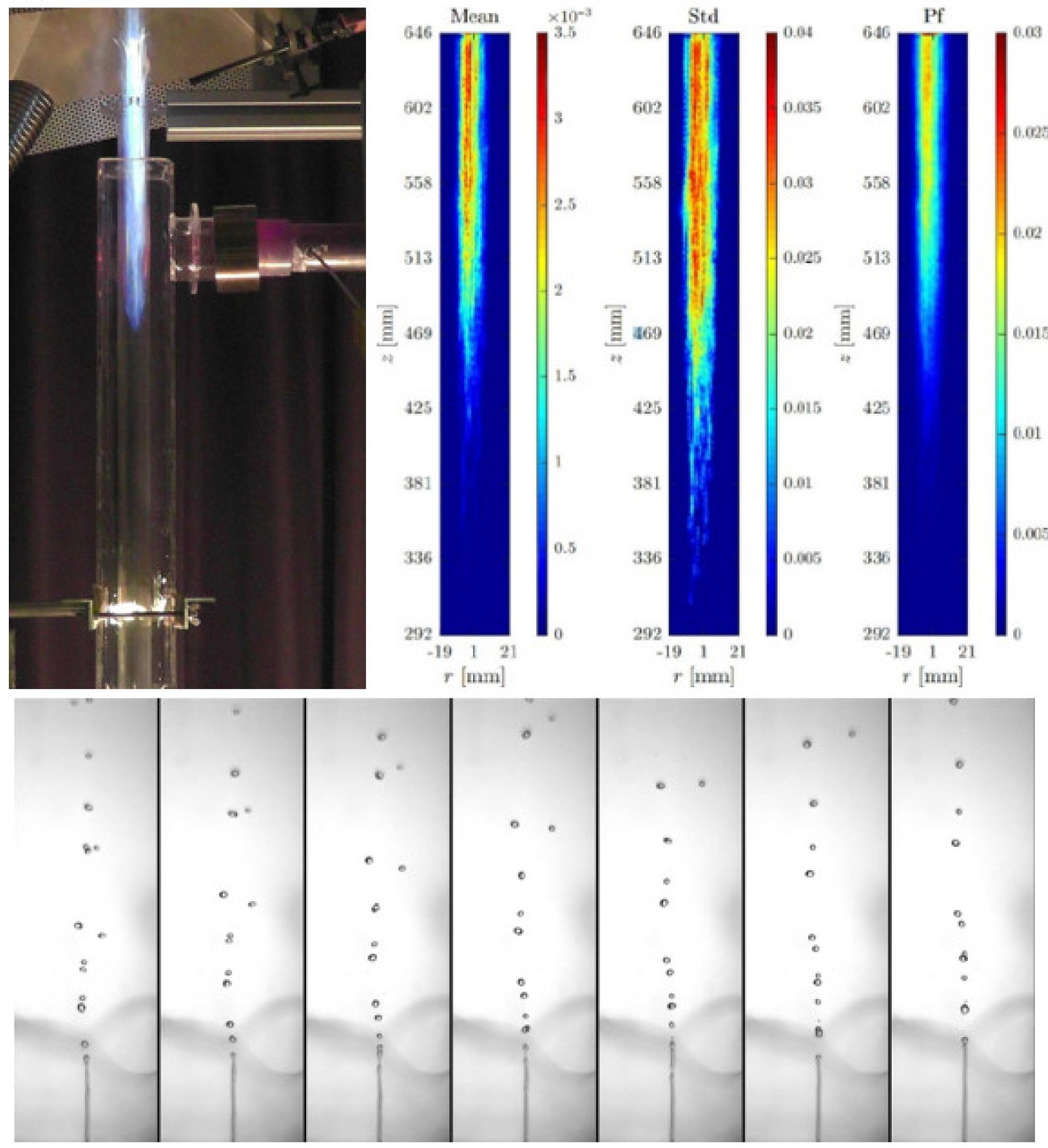 Autoignition is a multi-physics phenomenon that occurs in wide-ranging engineering applications, such as diesel engines, gas turbines and jet-engine afterburners. In these applications, autoignition occurs in the presence of flow inhomogeneities and turbulence. Liquid fuel autoignition presents a case of chemically reacting flow where processes such as jet break-up, atomisation, droplet evaporation (interfacial heat and mass transfer), turbulent mixing and chemical reaction occur simultaneously in the presence of flow, mixture and phase inhomogeneities. The multi-scale nature and direct coupling between these various contributing processes, present a challenging fundamental problem which cannot be understood by extrapolation from homogeneous, inhomogeneous (gaseous) and even single droplet combustion studies.

The Clean Energy Processes Laboratory at Imperial College London is equipped with a state-of-the-art experimental apparatus for a parametric study of the effect of flow inlet conditions on autoignition of polydispersed droplets of pure liquid fuels. A vertically mounted and optically accessible quartz reactor of circular cross-section receives upwards flowing air with temperatures up to 1150 K and velocities up to 40 m/s. Liquid fuel is injected continuously and axi-symmetrically from a water-cooled circular nozzle (placed concentrically at the reactor inlet) into this confined turbulent coflow of high temperature air at atmospheric pressures. Dynamic measurements of temperature with fine thermocouples and; optical non-intrusive measurements (with high-speed cameras) are performed to obtain quantitative data on autoignition delay time, location, frequency; fuel jet break-up, drop formation and evaporation.

In this theme, we manipulate the physical, surface and interfacial properties of single and multiphase systems to control and/or enhance their flow characteristics and heat transfer properties, such as turbulence and mixing levels, flow regimes, nucleation site density, phase change rates. Specifically in the Drag Reduction Experiment and Diagnostic (DREAD) rig, pipe flow experiments are conducted to further understand the mechanism of drag reduction and the parameters that affect it. The effect of parameters such as polymer concentration, polymer type, molecular weight and aggregation time, on the level of drag reduction and on the degradation of the polymer in turbulent flow are studied. A novel mechanism that is able to explain the inhomogeneity of the polymer concentration profile across the pipe section when drag reduction is occurring has been proposed.