Following the success of the original March workshop, we hosted another event on Monday 28th June 2021, also via Microsoft Teams. Representatives from COMAC-BATRI were in attendance, as were Centre Co-Directors – Professors Spencer Sherwin and Bamber Blackman, and academic supervisors to give support to presenters. Summaries of talks can be found below.

This project investigates efficient computational methods for the prediction of aeroelastic instabilities across the flight envelope or on multiple payload configurations. To this end, robust strategies for direct solution of the flutter equations have been implemented in a new aeroelastic simulation framework developed within the open-source SU2 suite. This presentation provided numerical results from the application of the developed approach to a 2 degrees-of-freedom airfoil in transonic flow. Finally, a framework in which the structural equations of motion are built based on modes given from an external FE solver has also been developed. The methodology used for the treatment of 3-dimensional configurations of general geometrical complexity was also discussed.

Creep age forming (CAF) is a metal forming method invented for fabrication of large-scale panels. CAF combines metal forming and age-hardening in one process which can enhance the material strength and fabrication efficiency simultaneously. This project aims at seeking improvements of CAF in aspects such as simulation accuracy of forming process/final panel shape, and fabrication method.

New aerodynamic features have been incorporated into Imperial’s methods for aeroelastic simulation and control design. The presentation introduced non-lifting aerodynamic bodies, to model fuselage and its interference with the wing, both in static and dynamic aeroelastic scenarios. For static aeroelastic computations, preliminary results of the implementation have been demonstrated.

The aim of the project is to study in detail the delamination and dis-bond which may occur from impact on composite structures by various foreign objects e.g. hailstones or birds. The impact behaviour of CF/Epoxy composite samples with different repair configurations which based on the fibre architecture of a quasi-isotropic lay-up, with different size and thickness of the patches, has been investigated. The low-velocity impact experiments were undertaken using a drop-weight test. The damage inflicted in the composites was assessed by both a visual inspection and by ultrasonic C-scanning. Furthermore, an elastic, two-dimensional finite-element (FE) model has been developed to simulate the results obtained from the low-velocity tests. The model, which is relatively computationally efficient, has been shown to simulate the loading responses of the composites by the impact.

We have investigated low velocity impact damage in pristine and repaired CF/Epoxy samples. Repairs involve removing damaged material and replacing it with an adhesively bonded patch and plug. The resulting damage is viewed using C-scan software, from which the effectiveness of the repair can be determined. Further investigations into the high velocity impact damage performance of repaired CF/Epoxy are planned, as well as similar testing on CF/Thermoplastic material.

To investigate the behaviour of CF/PPS (a thermoplastic matrix composite) under stamp forming conditions, material characterisation tests are being undertaken, including interply friction testing and bias extension testing. The aim for this part of the project is to help optimise the stamp forming process and produce parts with fewer defects, such as wrinkles.

The present workshop reviews the workflow for flow transition prediction. In the second and third building blocks of the workflow, the stability for boundary conditions is analyzed and the process to obtain the most unstable instabilities is introduced. In addition, flat plate geometry with a forward-facing step is studied for verification.

The workshop was hosted on Monday 29th March 2021, via Microsoft Teams. Attendees included Centre Co-Directors, researchers, and their academic supervisors. The aim of the workshop was to provide an update on all active projects, but also to consider how those individual projects and research themes fit into the research centre as a whole. Presentation summaries can be found below. 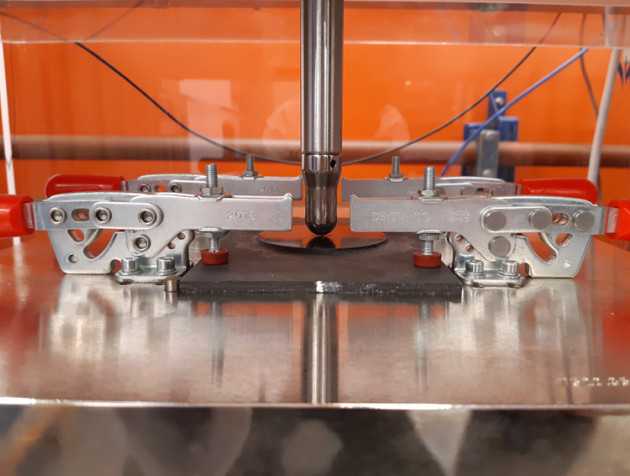 We discussed the improved impact performance of thermoplastic composites compared to thermoset composites. We presented results from impact testing of repaired CF/Epoxy samples and plans for impact testing of repaired CF/PEEK samples. We then covered main findings from literature review into stamp forming, including frictional behaviour of material and the effect of processing parameters on final part quality. Our plans for pull-out test on CF/PPS to characterise inter-ply frictional behaviour and suitable forming conditions were also explained. The presentation was concluded by highlighted plans for impact testing of pristine and formed CF/PPS to investigate effect of forming on impact performance of the material.

We employ the eN method to predict laminar flow transition to turbulence at transonic flow condition and with the presence of surface roughness. The first step in the workflow is to obtain a flow field using a more efficient low-fidelity tool, such as RANS. Next, the baseflow in a smaller domain covering the target surface is computed, where the boundary conditions are interpolated from the flow field in the first step. Different profiles of the baseflow are analyzed to find out the most dangerous instabilities, whose developments along the surface are then simulated using the linearized Navier-Strokes solver. Finally, by post-processing the results, the envelope for the amplification curves of the instabilities are generated to get the N-factor, with which the flow transition can be predicted.

The computational methods we have been using for the GLA project are based on the open-source aeroelastic simulation environment SHARPy (https://www.imperial.ac.uk/aeroelastics/sharpy/), which is currently developed in our research lab. SHARPy couples unsteady aerodynamics with nonlinear structural dynamics. SHARPy can perform dynamic time-domain simulations of an aeroelastic system and access flexible-multibody vehicle dynamics to predict vehicle response. These capabilities are essential to accurately capturing the flight dynamic and rigid-body effects, necessary to explore new potential GLA strategies for next-generation commercial aircraft. 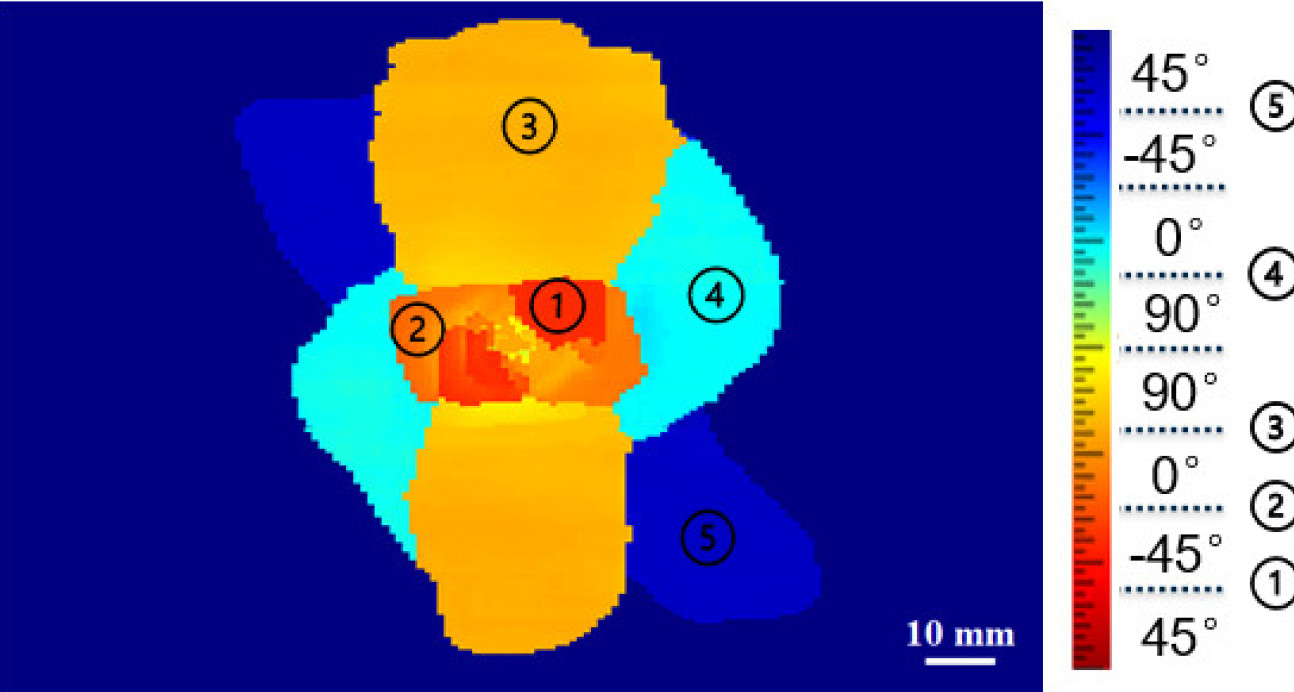 The aim of the project is to study in detail the delamination and dis-bond which may occur from impact on composite structures by various foreign objects e.g. hailstones or birds. With the use of experimental and numerical techniques, we are investigating the response of flat composite panels and patched repair composite structures against low velocity single- and multi-impact. 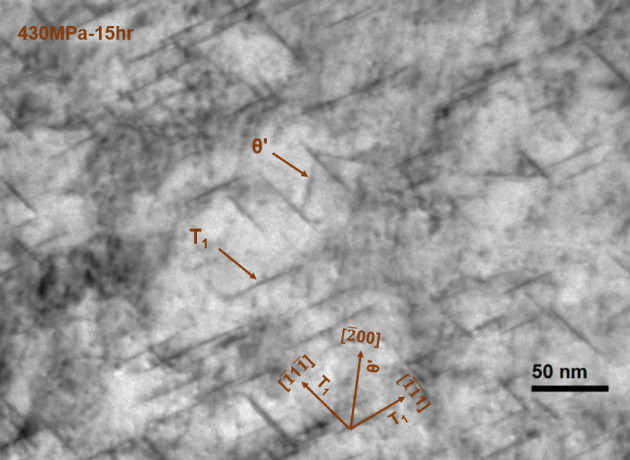 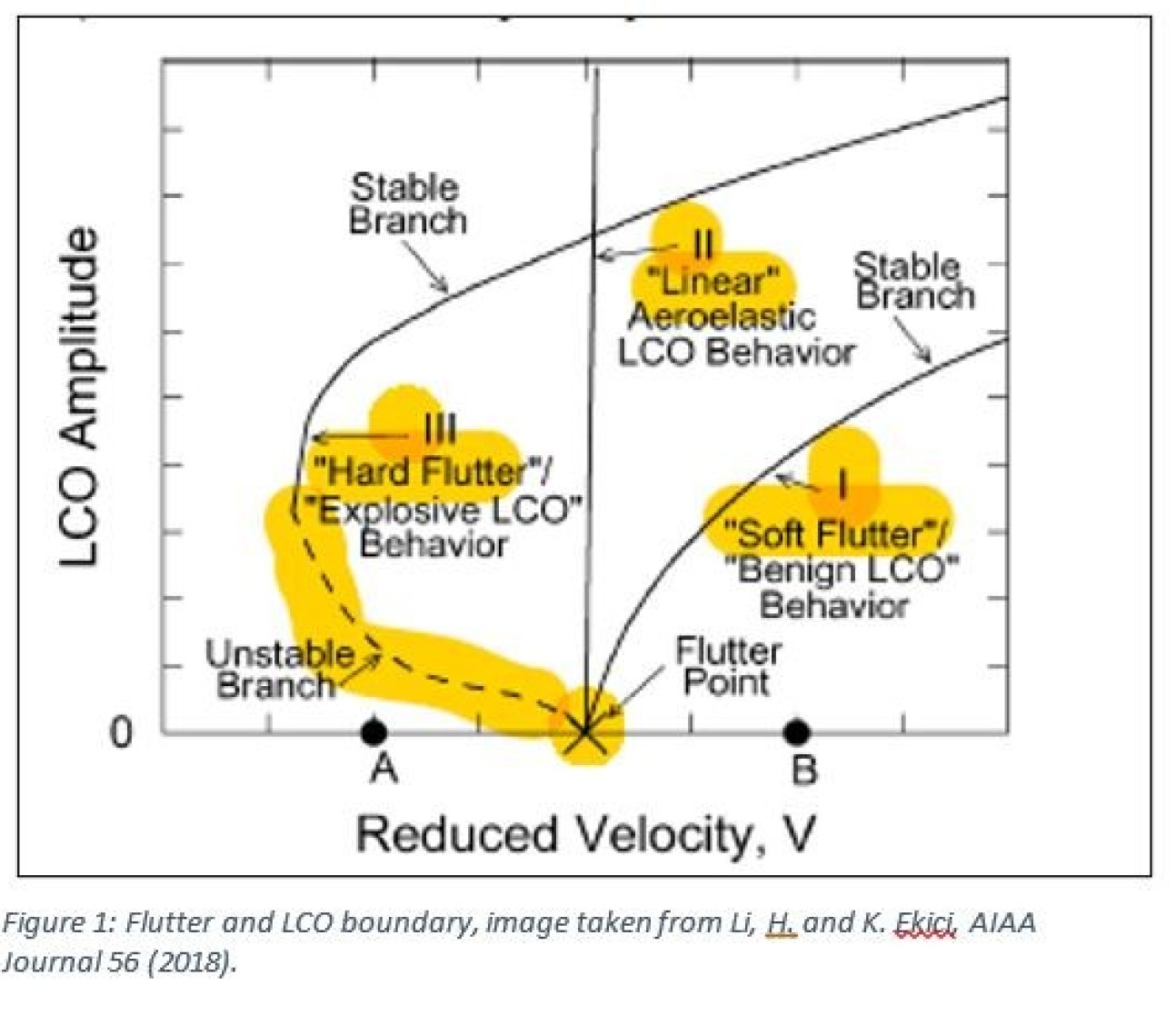 Accurate prediction of flutter boundaries for air vehicles is crucial since flutter is a certification-critical phenomenon which ensures the safety of flight operations. Currently, flutter issues are identified only at the final design and flight-testing stages, at which point any design changes are extremely costly. Therefore, accurate and efficient flutter prediction methods can lead to significant cost savings. In the industry, the standard flutter prediction methods are based on low fidelity aerodynamics and linearized transonic equations, while in the research community the standard method is to analyze wings through costly time-accurate coupled CFD-CSD simulations. Fortunately, since flutter is a self-excited neutrally-stable periodic phenomenon, frequency-based simulations can be used to by-pass the long transient phase and accelerate the solution process. With frequency-based methods, we can represent all the state variables with a Fourier series and transform the time-dependent problem into a series of coupled steady state problems. Then, the flutter boundaries can be predicted in one-shot by searching simultaneously for the reduced velocity and the corresponding frequency. Frequency-domain methods present a lot of advantages: they are applicable to systems of generic complexity, they only seek directly the periodic solution, and they naturally introduce high-fidelity computations in the flutter prediction framework. To this end, in our presentation we discussed the direct solution methods which follow this idea, allowing to capture multiple branches of the flutter boundary accurately, whilst being approximately 30-40 times faster than the time-accurate approach. 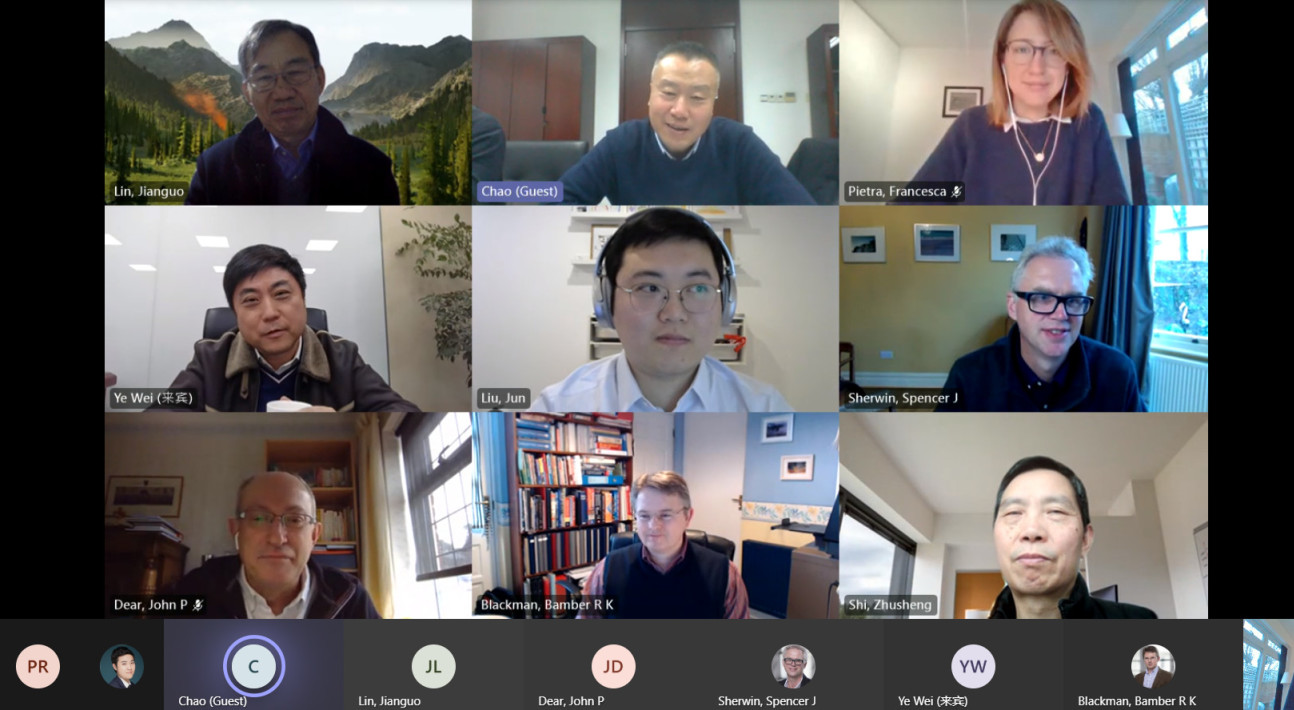 The ECCOMAS Prandtl medal has recently been awarded to the Department of Aeronautics’ Professor Spencer Sherwin. Professor Sherwin, the Department’s Head of Aerodynamics, received the Medal for his outstanding and sustained contributions to computational fluid dynamics research. ECCOMAS (the European Community on Computational Methods in Applied Sciences) groups together European associations who have interests in developing and applying computational methods in science and technology. Read full story here.

We are also delighted to announce a recent promotion of the Co-Director of the Imperial - COMAC Research Centre - Bamber Blackman, to the rank of Professor. Professor Blackman's research interests include the fracture mechanics of structural adhesive joints and polymeric fibre-reinforced composite materials. He is based within the Department of Mechanical Engineering. 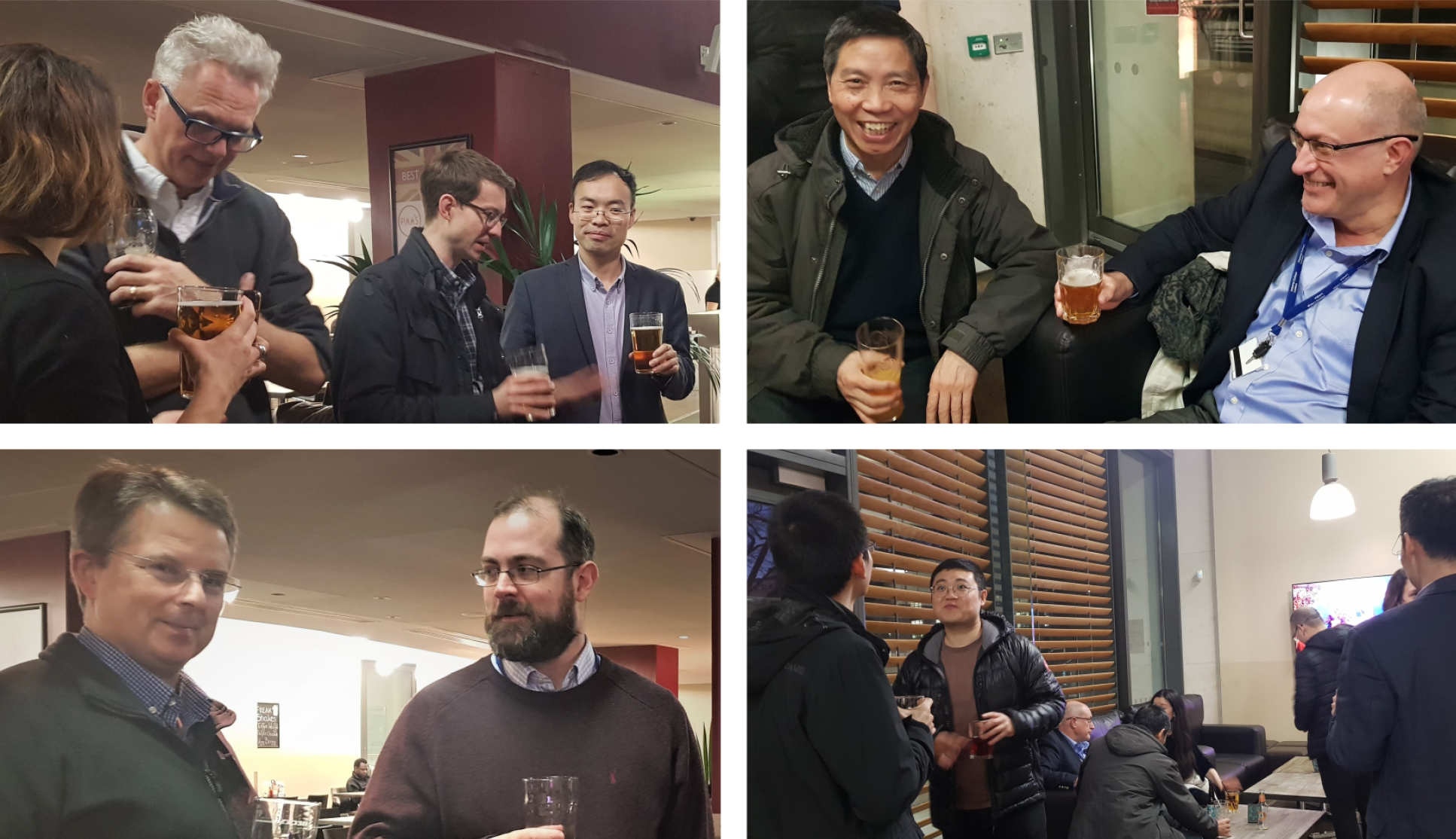 Following the Quarterly Internal Management Meeting on 21st January 2020, all investigators, researchers and PhD students currently involved in the Research Centre met for an informal networking session at the Eastside Bar on Imperial’s South Kensington Campus.

The event served as an ice breaker for everyone, aided exchange of ideas and plans for progression of individual projects. All over a well-deserved drink!

As part of his fourteen-day trip to China, Professor Spencer Sherwin was hosted by Mr. Li Dongsheng in Shanghai on 12th December 2019.

They discussed progress of the COMAC-Imperial Research Centre over lunch.