We developed MRI compatible robotic interfaces for neuroscience investigations first in callabration with Hannes Bleuler and Roger Gassert from EPFL, then in London for the study of brain activity in neonates. 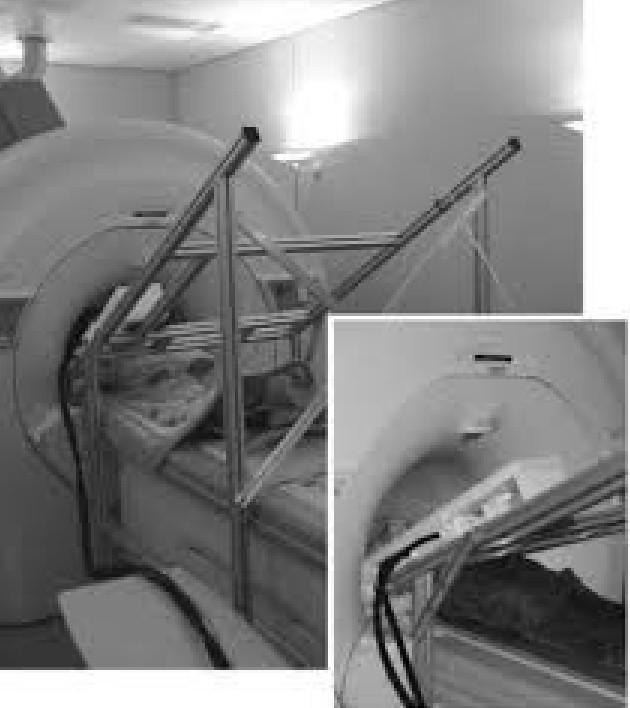 First fMRI compatible haptic interface, made in plastic with a hydraulic transmission to bring the power from the control to the scanner room. 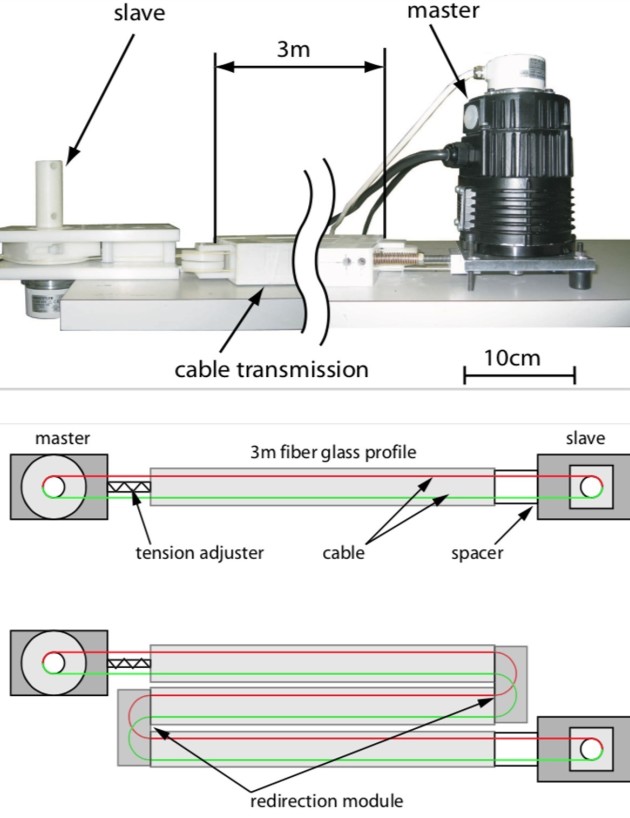 This cable transmission study revealed an excellence transmission through the cable (without the heavy infrastructure of the hydraulic transmission), but requires a rigid support. 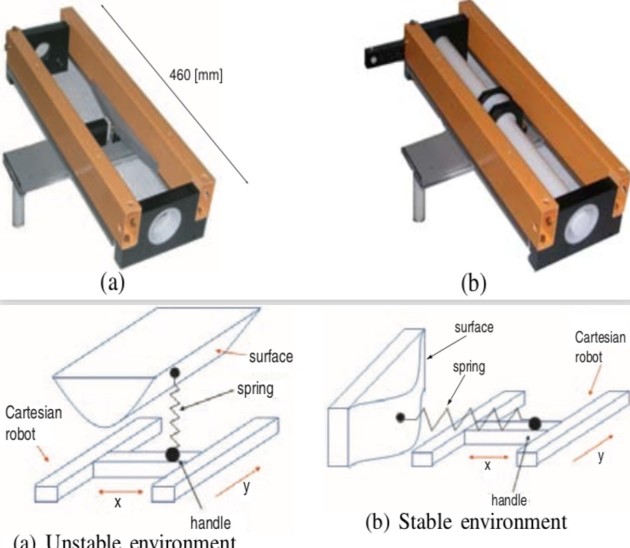 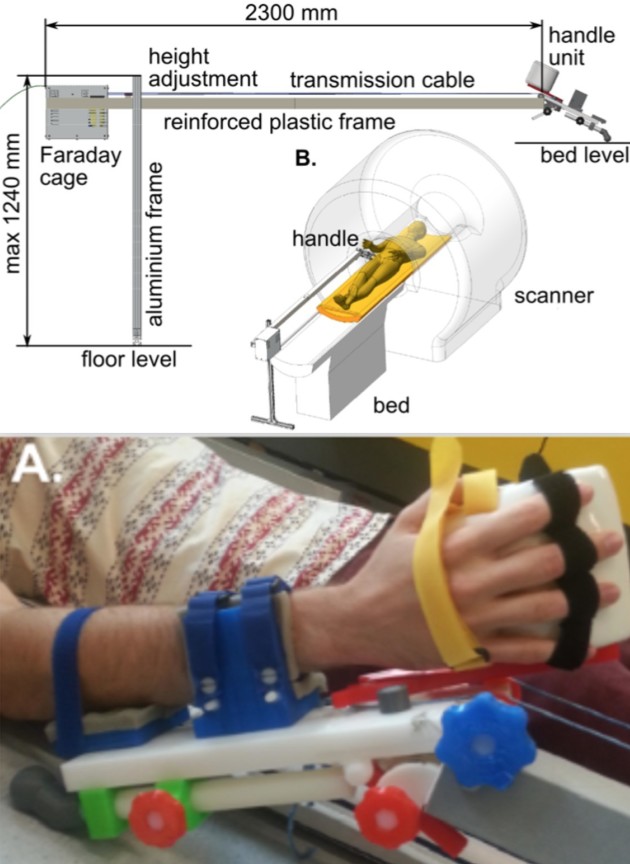 A portable and compact wrist flexion/extension interface that can be installed or disposed in 15'. The concept uses a cable transmission to a shielded box transmitting information to the control room via optical fibers.

Wrist and ankle interface for neonates 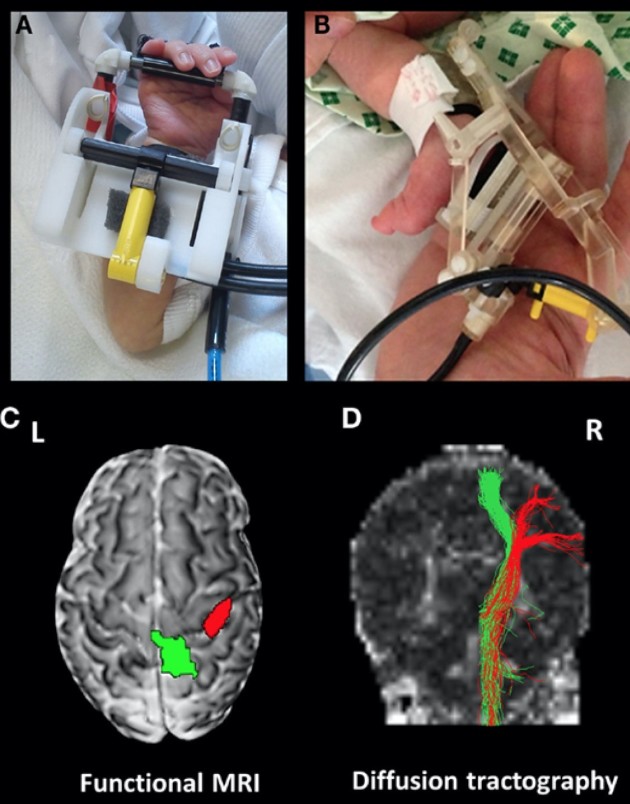 We developed fMRI compatible robotic interface to study the brain activity in infants born preterm at risk of cerebral palsy. A pneumatic transmission was used to elicit periodic movements. We used first a balloon of the size of the neonate's hand, then a wrist interface integrating a position sensor done with an optical fiber. An ankle interface was also developed.

We have developed endpoint-based devices to train typical functions of the hand and upper limb in neurologically impaired individuals. 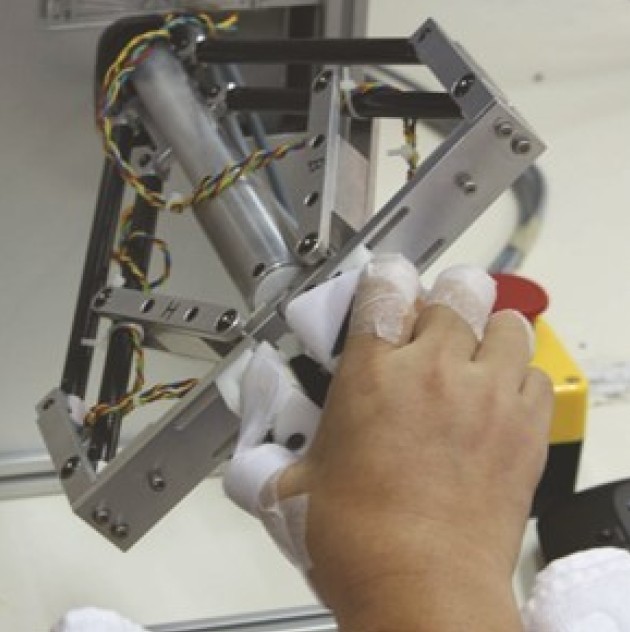 This robotic device is to train grasp and forearm rotation. The first prototype gave rise to different versions at McGill and ETHZ. 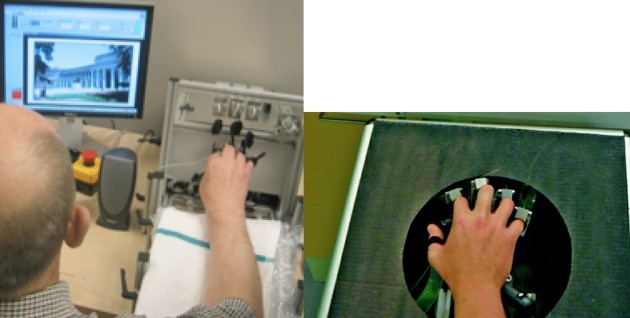 A robotic device to train the fingers function. In the latest version shown here, each finger uses a module with a cable pulling against a spring, thus enabling to open and close the finger without constraining its path. 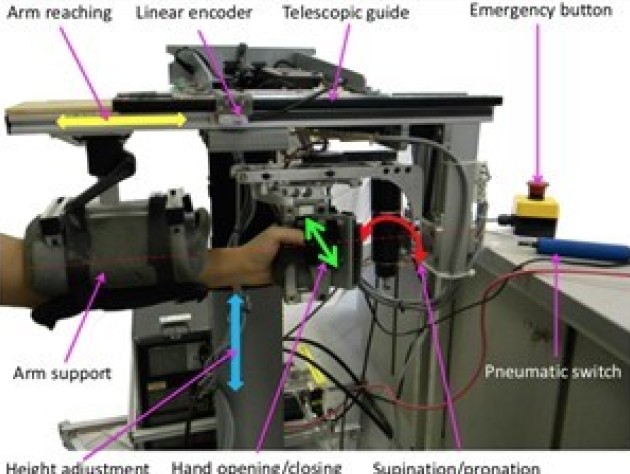 A three degrees-of-freedom robotic device was developed to train the many activities of daily living that involve arm reaching in addition to hand opening/closing and forearm rotation. The second version is shown here. 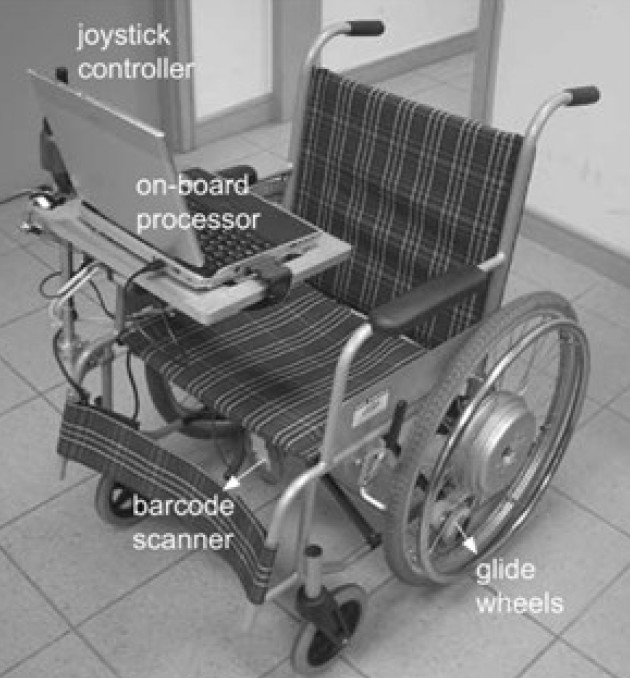 A commercial wheelchair was modified by integrating a computer for modifying the joystick movement to steer the movement along a given path. It was used with individuals with cerebral palsy and also to implement the first brain controlled wheelchair. 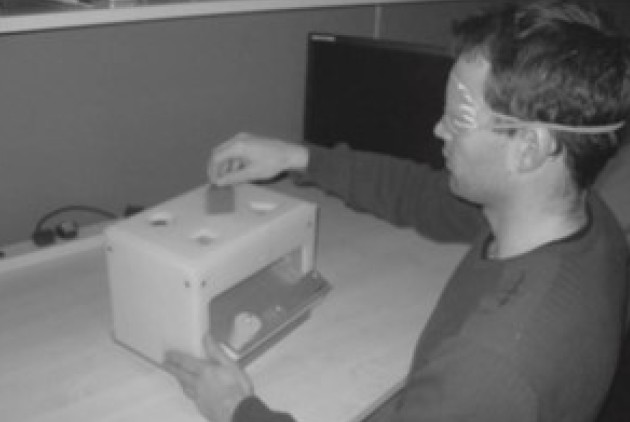 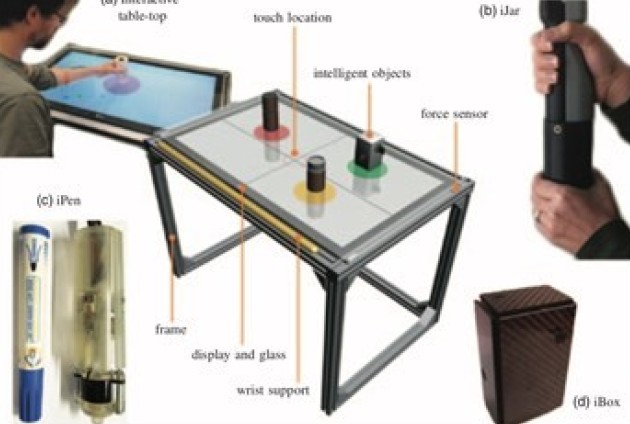 Table top system for task-oriented-training with instrumented objects. Immersive visual feedback is provided by the large monitor covered by a glass measuring contact force and position using loadcells. Was commercialised by Tyromotion as Myro,https://tyromotion.com/en/produkte/myro/ 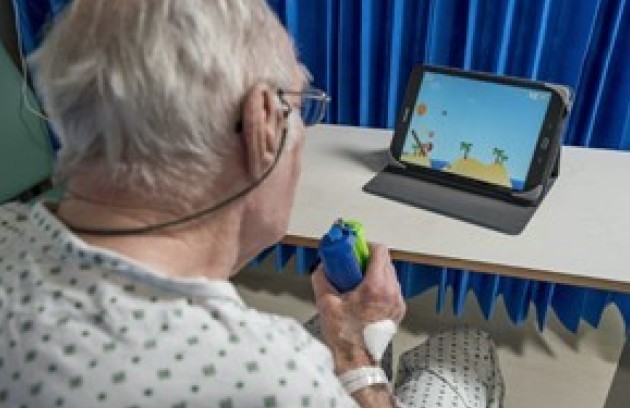 Digital compliant handgrip measuring the grip force and closing. Used with a computer tablet and dedicated games, this is the only system we know that can be used from soon after a stroke at the hospital, to home. It is now commercialised by http://www.gripable.co/. 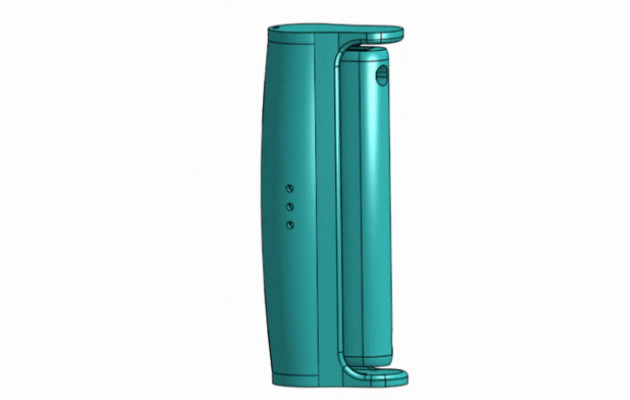 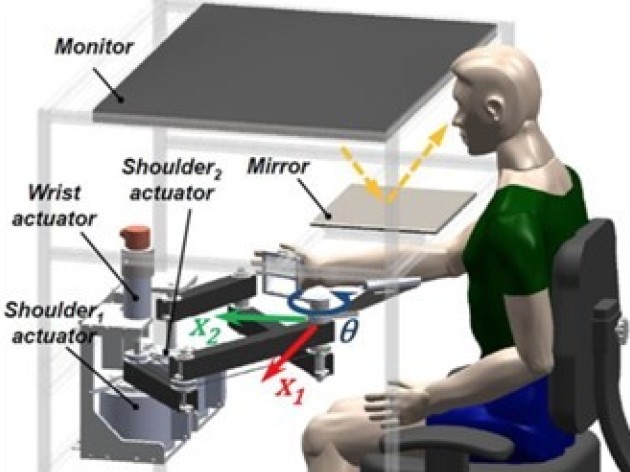 A rigid interface to interact with three-dimensional planar arm movements. It is used at UCL for both neuroscience and clinical studies 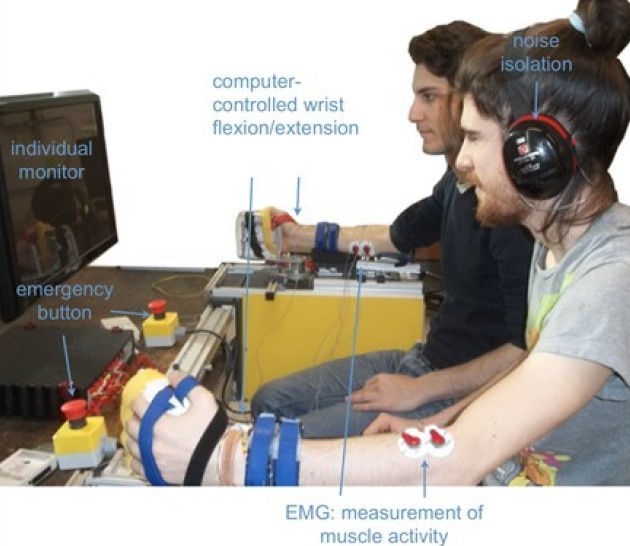 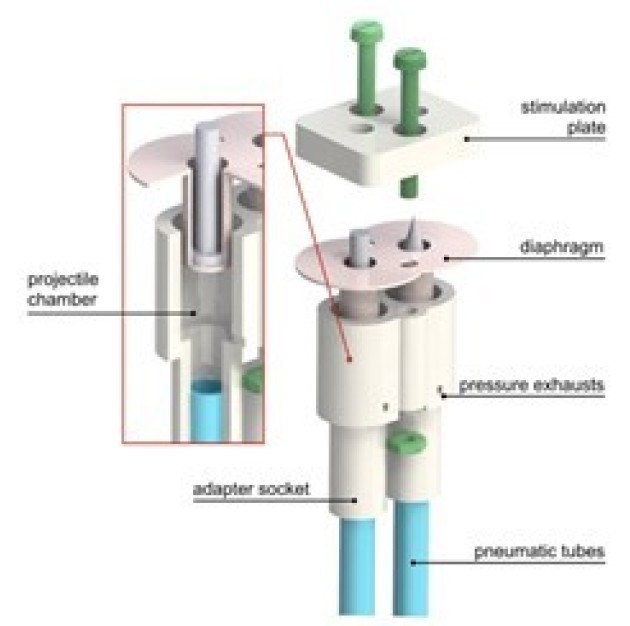 A simple device for the investigation of the human somatosensory system with functional magnetic resonance imaging (fMRI). PC-controlled pneumatic actuation is employed to produce innocuous or noxious mechanical stimulation of the skin. Stimulation patterns are synchronized with fMRI. 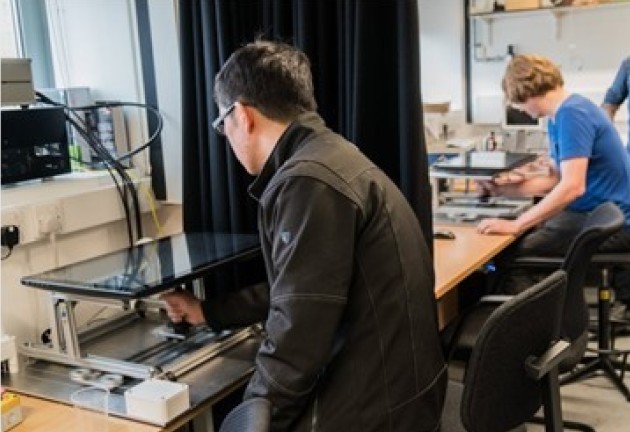 A dual robotic manipulandum to investigate human-human interaction with planar arm movements. HMan has been developed at NTU [Campolo (2014) J Neuroscience Methods 235: 285-97] and is commercialised by https://articares.com/. 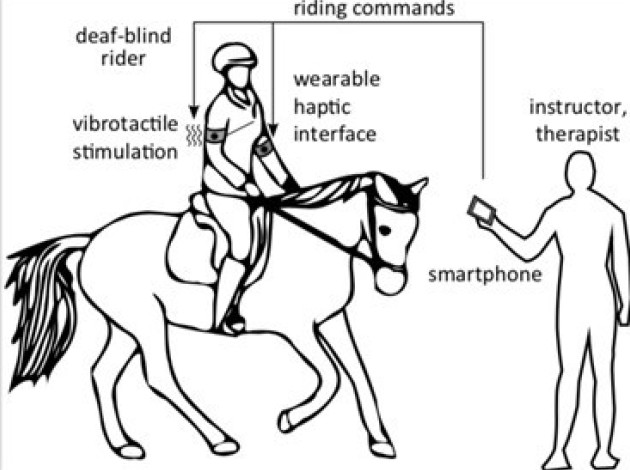 Enables patients to practice horse riding by themselves and so develop their agency. 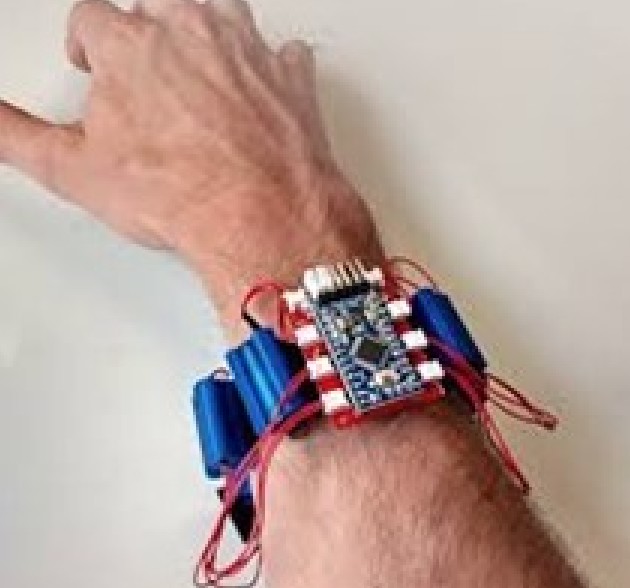 The haptic bracelet can provide feedback around the forearm, implement rotary waves etc.

Gently stimulates the skin of e.g. an infant while controlling the force. 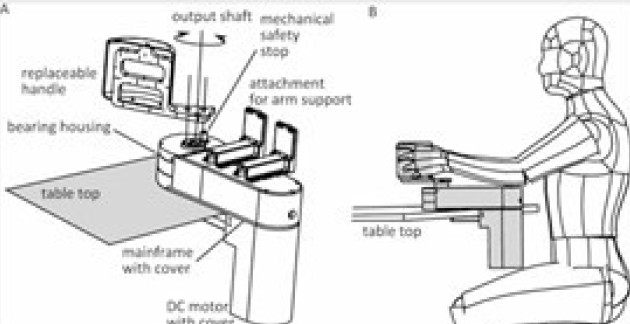 For clinical and neuromechanics investigations with force, position and muscle activation sensing.