The Multiple Sclerosis and Parkinson’s Tissue Bank is a national collection of central nervous system tissue samples donated by individuals with multiple sclerosis, Parkinson’s disease and related conditions. The Tissue Bank was formed from The UK Multiple Sclerosis Tissue Bank and the UK Parkinson’s Disease Society Tissue Bank which have existed at Imperial College since 1998 and 2002, respectively. Both tissue banks over the years developed UK-wide donor schemes and accrued a large number of well-characterised cases of multiple sclerosis (MS) and Parkinson’s, as well as a certain number of control cases. Furthermore, both tissue banks achieved a worldwide recognition for their services to the scientific community.

Brain banking is an important part of science infrastructure and is rapidly establishing itself as a scientific discipline looking to find novel ways of preserving human brain tissue and of developing new uses for its tissue collections. Quality assurance and a meticulous approach to tissue preservation are encouraging scientists to use human tissue in research. Maintaining archival collections of tissue and data will allow scientists of the future to conduct retrospective studies on the influence of environment, lifestyle or the increasing number of drugs on both clinical and pathological aspects of human brain conditions.

In establishing the new Tissue Bank back in 2009 we have been mindful of both the interests of the MS and Parkinson’s community and the needs of researchers using the service. The Tissue Bank's main aims are to:

Hosting the national human tissue facility for donors and an international resource for scientists has always been a most fulfilling experience. The positive response that we have received from the wide range of communities with whom we have interacted over the years is a source of great encouragement and a testament to the essential need for a national facility such as this. We feel privileged in having been able to run the Tissue Bank for donors and scientists alike who share the single aim of wishing to help find more effective treatments for multiple sclerosis and Parkinson’s disease.

The work of the Tissue Bank is supported by the Multiple Sclerosis Society of Great Britain and Northern Ireland and Parkinson’s UK in partnership with Imperial College London. We are also grateful for additional funding provided for service support costs by the Medical Research Council. 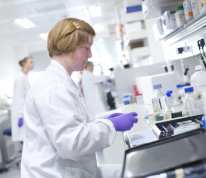 Register as a donor
Support research into MS and Parkinson's