For the next five years, Dr Morgans (Aeronautics) will receive funding for her research into lower emissions for gas turbine combustors following a successful grant application to the European Research Council (ERC).

Combustion in gas turbines, for example in power plants or jet engines on aircraft, produces emissions such as nitric oxide and nitrogen dioxide that cause air pollution. Modifications to combustors to reduce these emissions currently give rise to damaging ’combustion instabilities’. The instabilities occur when the gas burns unsteadily and creates sound waves in the turbines. In turn this makes the combustion more unsteady, and it is this vicious circle that causes damage to the engines.

With this instability it would not be possible for an aeroplane engine to fly or a power gas-turbine to operate for any length of time, meaning that low emissions engines are not used at all and emissions levels from turbines remain high. The new project

I hope that progress in the research field will be accelerated.

will model combustion instability in order to understand ways of preventing and suppressing it. These models will mean that the modified turbines will be able to safely reduce emissions.

“Despite many years of intensive research aimed at guaranteeing that turbines that produce lower emissions will not exhibit combustion instability, the problem simply hasn't gone away. I aim to improve how we can predict and eliminate these instabilities. I will also develop an open-source combustion instability simulation tool that will allow researchers who are new to the field to model and share their ideas.

“This will make sure that those who work in different but potentially relevant fields and those who don't have long and established links with industrial collaborators can contribute.  In this way I hope that progress in the research field will be accelerated,” Dr Morgans said.

Already a multi-award winning academic, Dr Morgans will receive a €1.49m Starting Grant designed to help young academics establish themselves and their work. She was among six successful Imperial applicants for the grant. 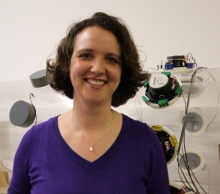 The mother of two, who joined the College in 2007, can now dedicate a significant portion of her work-based time to building up her research group and driving her research forwards.

Dr Morgans was interviewed for the grant in Brussels by the ERC just seven weeks after having given birth to her second daughter, Elin. Around 15 scientists, with a variety of research backgrounds, focussed on the technical scientific content of the proposal, asking questions submitted by expert reviewers. The interview was made all the more daunting with a projected timer countdown for each of the presentation and question sections.

“When we found out I’d been successful in my application it was a huge weight off of my shoulders. It is really great timing for me and is a fantastic opportunity for me to put my research ideas into practice,” she added.

At the end of 2012, the ERC announced the successful applicants for its research grants. Imperial received 11 project grants ranging across the Faculties of Engineering, Medicine and Natural Sciences, securing funding of over €25m.