Professor Chris Toumazou has been awarded the 2013 Royal Society Gabor Medal for his engineering solutions for DNA analysis.

Throughout his career, which spans over 20 years at Imperial, he has continually explored new opportunities to design semiconductors that can be developed with medical uses in mind.

Professor Toumazou, who is also a Fellow of the Royal Society, said: “This means a lot to me since it recognises interdisciplinary research and how my invention in semiconductors has transformed the way we can now sequence DNA. Today, the fastest growing sequencing technology is based on this invention and a genetic sequencing machine is becoming more like a PC.” 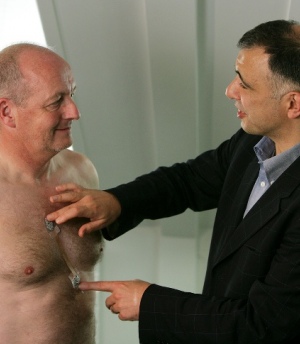 Technology designed by Professor Toumazou has applications across a range of areas in biomedical sciences, from implants for deaf children to an artificial pancreas for people with type 1 diabetes.

The Gabor Medal is named after former Imperial physicist Dennis Gabor and is awarded for interdisciplinary work between life sciences and other fields. Professor Gabor won the 1971 Nobel Prize in Physics for his invention and development of holography, which is most widely known for its use in security and is found on items like bank notes, passports, and credit and debit cards. Gabor Hall, one of the Eastside Halls in South Kensington, was opened in 2009 in his honour.

“It was a surprise to win the award and I am so honoured that it is named after Dennis Gabor,” Professor Toumazou added. “What is even more significant is that the Medal returns to the Department of Electrical and Electronic Engineering where Dennis Gabor did his Nobel Prize-winning work on holography.”

Earlier this year Professor Toumazou and Professor Sir Steve Bloom were awarded a prestigious €7 million grant from the European Research Council to develop an implant that will reduce appetite in people with obesity.

Among other notable inventions that Professor Toumazou has created is a DNA-reading computer chip that can quickly determine a person’s genetic make-up with the aim to enhance personalised medicine.

The device has also been used by an upmarket beauty salon in London to advise customers on the most suitable anti-aging serums based on their DNA.

Other Royal Society Medal winners this year include Nobel Laureate Professor Sir Konstantin Novoselov from the University of Manchester, who delivered the 2012 Kohn Lecture at Imperial following his work in discovering graphene. Both Professor Novoselov and Professor Toumazou were awarded prestigious Regius Professorships by the Queen earlier this year.