Scientists have captured rare footage of a little-known wild cat, which has red fur and a long distinctive tail with a black and white tip.

Almost nothing is known about the habits of the mysterious bay cat, but it is thought to be at risk of extinction due to widespread loss of its habitat on Borneo in the Malaysian province of Sabah.

The animals have been observed by researchers who are trying to understand the impact of logging on the lives of animals in tropical forests.

Until now, the bay cat (Pardofelis badia) had been recorded by remote, motion-sensitive cameras just a handful of times in its Borneo forest home and was only photographed in the wild for the first time in 2003.

Adult cats weigh 3 to 4 kilogrammes with bodies around 60 centimetres, not including their tail. The long tail has a white streak on its underside and a small black tip, which is often hard to see because of the way their tails curl upwards at the end. 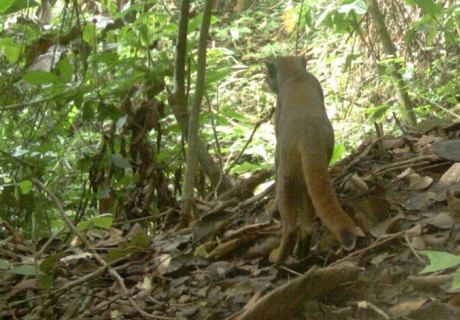 Dr Robert Ewers from the Department of Life Sciences at Imperial College London, leads the SAFE project, which covers around 8000 hectares of forest where the cats have been caught on video.

"We were completely surprised to see so many bay cats at these sites in Borneo where natural forests have been so heavily logged for the timber trade," he said.

"Conservationists used to assume that relatively few wild animals can live in logged forest, but we now know this land can be home for many endangered species.

"Our study today shows solid evidence that even top carnivores, such as these magnificent bay cats, can survive in commercially logged forests," Dr Ewers added. 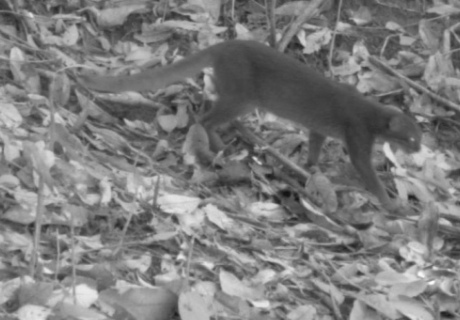 The research has been carried out by scientists from Imperial and the Zoological Society of London, and evidence of the sightings is published in the journal PLoS One.

The bay cat is one of five cat species native to Borneo, the list includes: the Sunda clouded leopard (Neofelis diardi), leopard cat (Prionailurus bengalensis), flat-headed cat (Prionailurus planiceps) and marbled cat (Pardofelis marmorata). All of these species except the leopard cat are listed as threatened with global extinction on the IUCN Red List.

Scientists use automatically operated camera traps to collect information about species of birds and mammals such as tigers, who would avoid a person trying to track them.

ZSL and Imperial College London PhD researcher Oliver Wearn said: "The cameras record multiple sightings, sometimes of species which we might be very lucky to see even after spending years in an area.

"I've seen the clouded leopard just twice in three years of fieldwork, whilst my cameras recorded 14 video sequences of this enigmatic cat in just eight months." 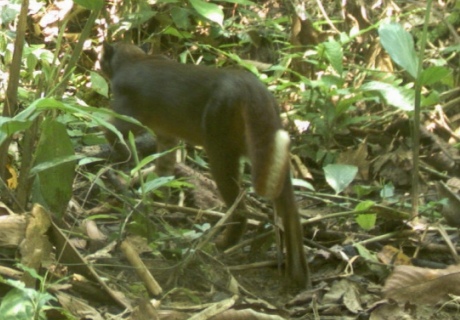 Scientists will continue to study the effects of logging on wildlife populations. They are looking more broadly than just these cats, at other large and small mammal species.

Overall they aim to gather information that can be used by palm oil producers on the island, to make their plantations more mammal-friendly, and assess whether saving patches of forest within such areas might be beneficial for Borneo's biodiversity.