Bioengineering MSc student and Army Officer Dave Henson talks about his work in prosthetics research and competing in the Invictus Games.

Captain David Henson is a soldier, officer, double amputee, athlete and recently a Member of the Most Excellent Order of the British Empire (MBE). But when I sit down to chat with him, he tells me he never really thought he’d be anything other than an engineer when he was growing up.

“If you think in a certain way, that’s just how you think – it informs how you approach problems and overcome them. My brother is an engineer as well so maybe it runs in the family. It just happened that I wanted to join the Army as an engineer.”

After his A-levels Dave went on to study mechanical engineering at university before going onto the Royal Military Academy Sandhurst – the UK’s training centre for Army officers. He then joined 22 Engineer Regiment as a Second Lieutenant Henson. 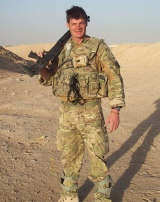 It was October 2010 when he was deployed to Afghanistan. Part of his role out there was to lead a detachment force clearing improvised explosive devices (IED). He was doing just that on Sunday February 13 2011, hoping to make an area safe for Afghan families to return and set up homes. They successfully cleared the first of two compounds; but whilst in the second, the unthinkable happened as Dave stepped on one of the small percentage of IEDs that inevitably remain hidden, despite all the meticulous efforts of the expert team. Dave’s right leg was amputated above the knee and his left leg through the knee and what followed was a period of long physical and psychological rehabilitation.

While Dave doesn’t shy away from talking about that time, we are here to focus on recent positives, of which there are many. He is fresh from a successful campaign as GB Captain at the Invictus Games, leading a team of injured service personnel and veterans in sporting competition with counterparts from armed forces around the world. He even squeezed in a gold medal himself in the 200m IT2 Final. At the time of writing Dave is also in the process of finishing his dissertation project for his Master’s Degree in Biomedical Engineering, focused on developing better prosthetic knee joints. 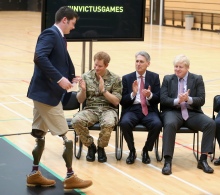 Needless to say Dave has a vested interest in seeing this technology succeed for his own benefit and those of other amputees. While his carbon fibre blades allow him to run 200m on a track faster than the vast majority of people, they do have major limitations in terms of flexibility of movement and long term outcome. For many amputees the stress of life on prosthetics eventually takes its toll on the hips and back leaving some wheelchair-bound.

“That is a constant driver for me. I really miss being able to do things I did before like running up and down hills, climbing mountains, playing basketball and squash, doing leisure activities with my wife.

“So the question is what can we do about it? That’s the way an engineer thinks. Rather than sitting around being miserable, let’s find a solution.”

In the case of Dave’s work that solution is an internal knee reconstruction that could be fitted inside a residual limp and connected to tendons and muscles, making for a more mobile joint that has  better long term outcomes for both veterans and indeed civilian amputees.

On that note we also get onto discussing how the unfortunate reality of conflict can have the fortunate consequence of improving technology and medical care in both the military and civilian spheres, particularly with respect to acute trauma.

“The fact is I wouldn’t have lived 10 years ago with this type of injury – we only really started seeing double amputees in any great numbers in 2006 and 2007, before that most of us would have died. But that also brings with it new challenges in terms of recovery and rehabilitation, getting us back up and walking competently again. That’s ongoing and my work is a small part of it.”

Tangible evidence demonstrating how care for trauma victims has improved can be seen played out at the Invictus Games with the preponderance of injured, yet fit, determined and competitive servicemen. Dave has talked before about how he sees the Games as a chance to show spirit and a refusal to be broken, as well as an opportunity to thank the general public for their ongoing support. 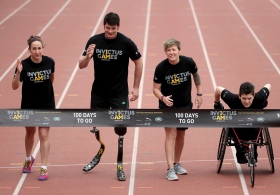 “Sport is a big part of the army, but I personally never trained to be good at sport. It was only during my recovery phase that I found the benefits that came with competition, namely the focus and drive it gives you – but perhaps more importantly the structure and control it brings back in your life with the set training times and routines. Nothing else matters when you’re in there training.”

Dave has experienced pressure like most of us could never even imagine when he was clearing IED fields in Afghanistan. But does he still get pre-race jitters while lining up at the blocks for a big final? 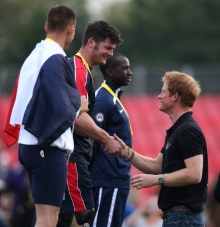 “Oh yes. The nerves are huge. On the first day of the 200m, because I’d been in the BBC documentary beforehand a lot of people were recognising me and I sort of felt like the face of the Games. Honestly, on the blocks all I was thinking was ‘don’t screw this up, just get to the end,’ because it’s actually quite easy to trip up with the prosthetics. In the lead up to every race this season I’ve said to myself ‘this has to be my last one, it’s too much pressure,’ but then when I finish the buzz is huge, and I’m like ‘right let’s get signed up to the next race’!”

So what’s the next step for Dave in life and sport? He hopes to stay on at Imperial working in the same line of research and will be discussing options with his supervisors soon. Is the Paralympic Games in Rio in 2016 potentially on the cards?

“We’ll see how it goes. This year proved to be just about doable with my Master’s course and the training alongside. Crucially I think I can improve the technical side of my running, which might push me into the top 5 or 6 rank in the world, making the cut for the World Championships in Doha next November. As for Rio we’ll see if the Head of Department gives me a few weeks off!”

The overriding impression of Dave is of someone who gets things done, doesn’t mull over the past too much and tackles each problem as it comes. But given the incredible rollercoaster journey he has had I wonder if he’s occasionally taken to introspection.

“Sometimes it feels like this is what was supposed to happen, and certainly that makes it easier to accept. As an undergraduate, before I even joined the Army, I did my final year project on helping double amputees get into racing go karts. It just feels right to be coming down this route now. I’m here now, enjoying it. Sometimes it’s nice not to have the future planned out in great detail, if a left turn comes up, you just go left, and you don’t worry about it too much.”