Last week a group of pupils from Westminster Academy took a tour of an Imperial animal facility.

The sixteen and seventeen year-olds were taken on a tour of the facility by animal research technicians. They saw how mice and rabbits are housed and looked after at Imperial, and heard how scientists work with the animals that are used in medical research.

Due to security concerns and the need to create a suitable stress-free environment where animals are protected from infection, animal facilities are traditionally mostly closed environments. While visits are arranged from time to time, very few school-aged people see inside animal facilities. The visit came about as part of Imperial’s commitment to openness, underlined last year when the college signed up for the Concordat on openness in animal research. 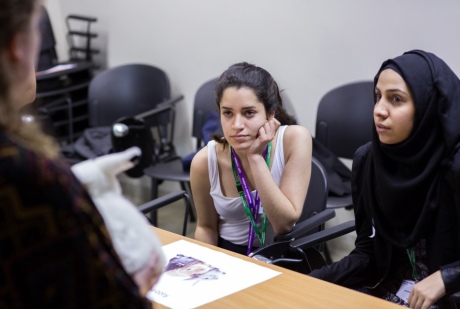 Among the group of 14 was Ayah, who hopes to study medicine when she completes her International Baccalaureate at Westminster Academy. Following the visit she said: “It was different to what you see in films and on television. The animals are well kept and the level of care is very high.”

Like all staff and visitors entering the animal rooms, the pupils and their teacher had to put on protective gloves, masks, hats, lab coats and shoe covers to reduce the risk of transferring infections to the mice and rabbits.

Inside the animal rooms, the visitors heard from Helen Goyal, Facility Manager, and Bruna Delfini Animal Technician, about their everyday care for research animals. 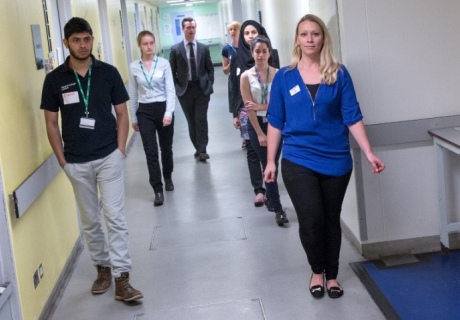 Helen Goyal leads pupils and their teacher through the animal facility

In the rabbit room, Bruna Delfini explained: “We have to give them lots of water. You can see these rabbits are big animals and they drink a lot. The rabbits are kept in floor pens instead of cages so they have more room to explore and move around.”

She also explained that the rabbits have a diet of pelleted rabbit feed combined with hay and a once a week treat made up of dried fruit. They have balls to play with and cardboard boxes to chew.

She then demonstrated how staff handle the rabbits to keep them safe and calm, and answered questions about what types of experiments the rabbits were used in and how they are similar to humans. 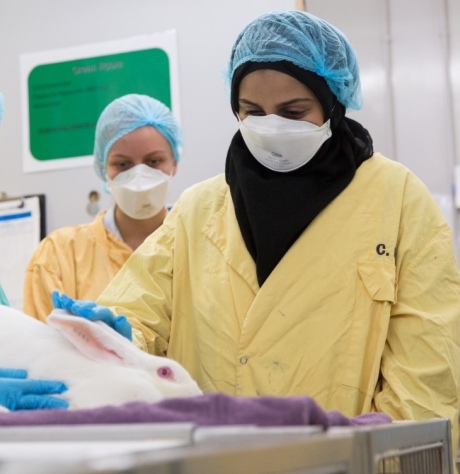 The tour was combined with a practical lesson, coordinated by the College’s Outreach team, where the pupils worked with Daphnia – tiny freshwater animals often called water fleas – to measure the effect of caffeine or alcohol on heart rate.

The lesson was led by Dr Rebecca Holloway from Imperial’s National Heart and Lung Institute, with help from James Bolaji, a final year pharmacology undergraduate student who will begin a Masters at Imperial later this year.

The pupils measured out specific concentrations of ethanol and caffeine. They studied Daphnia under the microscope: they counted the heartbeats and observed the changes when they added the drug solutions. Dr Holloway explained how Daphnia are a useful model for studying heart rate because they are transparent and their internal organs are visible. She went on to explain how other animals can be useful models for human disease. 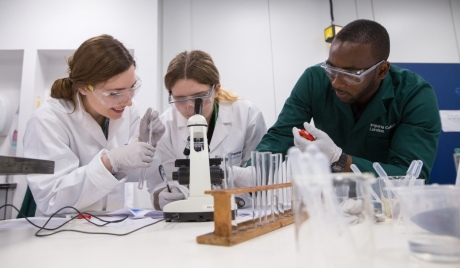 Pupil Gabriella, who plans to study biochemistry at university said: “I’ve heard a lot about animal research and I think it’s an important ethical issue. Until we can find a alternative I think it is still needed before treatments can go into humans.”

Fellow pupil, Momoko said: “It’s important what the work is for. I think it’s right for medical research but not for cosmetics or for commercial gain. It’s also important how the research is done so that animals are not abused.”

The event was organised in partnership with Understanding Animal Research and before the visit, students heard a talk from UAR’s Head of Education and Outreach, John Meredith.

School science technician Azhah Tarbha said: “Beforehand they had a lot of misconceptions about testing cosmetics and about the use of monkeys but after the talk they understood why and how researchers use animal models.”

Carina Leigh who hopes to go on to study geography said: “I didn’t realise that testing cosmetics on animals is banned. I think it’s still needed for medical research but it’s important that animals are well cared for.”