The Massachusetts Institute of Technology (MIT) and Imperial are longstanding research collaborators.

Two of the world's top universities, MIT and Imperial, have launched a fund to intensify research collaborations between their academics.

The MIT - Imperial College London Seed Fund will kick-start early-stage, risky and ‘blue skies’ research ideas that might not otherwise be pursued.

The awards are expected to cover small-scale experiments, the development of prototypes and travel costs, among other activities that often do not receive financial support at the earliest stages.

So many of the breakthroughs from MIT and Imperial can be traced directly to our shared commitment to basic research.

The two institutions have invested an initial $300,000 into the programme. If the fund succeeds, the universities anticipate significantly increasing their financial support.

Professor Alice Gast, President of Imperial College London, said: “This exciting collaboration will further strengthen the ties between two of the world’s great universities. The world turns to MIT and Imperial to solve a broad range of societal problems. Amid the immediacy of these increasing external expectations, both universities need to find ways to support fundamental research where the results are less immediate and the impacts promising but less certain. This programme is an important and creative way to ensure that truly novel ideas can be pursued. I am excited by its potential.”

Professor L. Rafael Reif, President of MIT, said: “So many of the breakthroughs that the MIT and Imperial faculty have enjoyed can be traced directly to our institutions’ shared commitment to basic research.  It is critical that we continue to find ways to support research interests whose payoff might be significant, but only over time.  We are delighted to collaborate with our colleagues at Imperial to create new opportunities for exploration.” 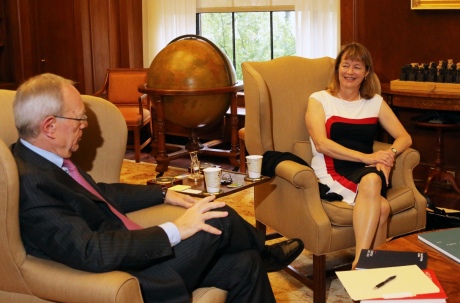 The initiative builds on decades of strong connections between Imperial and MIT, including thousands of top-tier journal papers, hundreds of student exchanges and scores of academic partnerships.

These include a Global Fellows Programme that brings together some of the most promising PhD students from both universities, an undergraduate summer exchange scheme and many research collaborations.

Professor Maggie Dallman, Associate Provost (Academic Partnerships) at Imperial College London, said: “MIT and Imperial researchers relish their collaborations with each other. I know that many will seize this opportunity, and create many new ones as a result. From bioengineering to business, Imperial and MIT can achieve more when we work together, and we are determined to do so.

“A common obstacle to innovation is the need for seed funding of exploratory research work. Sometimes very modest sums can make all the difference in helping ambitious and even risky ideas to take-off. Many academics at both universities could benefit from new partnerships. This seed fund will enable more to do so.”

Professor Richard Lester, Associate Provost for International Activities at MIT, said: “As two of the world’s leading research universities, MIT and Imperial College London share a passion for solving big problems through the development and application of science and technology. Most of those problems can only be tackled through international collaboration. We are delighted that the new seed fund will open up new opportunities for faculty and students at our two universities to work together."