An image of water rotating in what appears to be slow motion is one of the winning entries in a major engineering photography competition.

Professor Omar Matar, from Imperial’s Department of Chemical Engineering, and his team took the image as part of their research into liquid jets. The Imperial entry is one of five to take top place this year in the National Science Photography competition, which was organised by the Engineering and Physical Sciences Research Council. 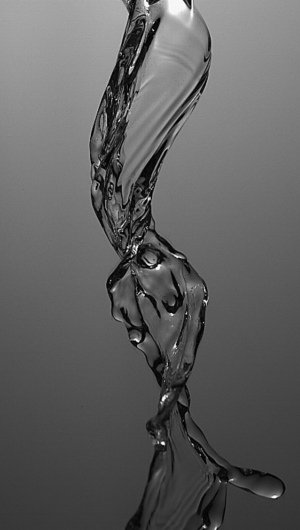 Liquid jets are common in a range of industrial and daily-life, from crop irrigation systems, to aerosols, and engine fuel injection systems for cars and trucks. Researchers around the world are investigating these liquid jets to understand their dynamics, so that improvements can be made to maximise their performance.

The liquid jet in the image appears to have viscous globular tendrils, which spin in a downward trajectory, in a similar fashion to the fluid-like movements of a contemporary dancer.  This effect was created by adding a tiny amount of harmless polymer into the liquid. Adding the polymer gives the liquid jet more elastic-like properties and the team were exploring them in more detail when they took the winning photo.

Normally, a liquid jet breaks apart due to a combination of different forces including gravity and the liquid’s surface tension. The team say the polymer they added acts like microscopic springs, which keeps intact the distortions caused by the jet. This effect, together with centrifugal forces, makes the liquid exhibit a complex, curved shape, while the surface tension creates vertical ripples.

Professor Matar said: “The EPSRC competition gives us engineers a chance to reveal to the world some of the truly beautiful sights we see every day as part of our research. I am really pleased that our work was recognised by this competition. Liquid jets are the silent heroes of many processes, so it is great to see this process stepping out into the metaphorical limelight and getting its due credit. I am also sharing this award with many members of my research group, so congratulations to my team for making this acknowledgement possible.”

The research was also carried out by Dr Zhizhao Che, a postdoctoral research fellow from the Matar Fluids Group, Fen Shi Wong and Panuvit Bunrittophol, who are both undergraduates in the Department of Chemical Engineering at Imperial. The research was funded by the EPSRC Multi-scale Examination of MultiPHase physIcs in flowS project.

Teams from the Universities of Aberystwyth, Edinburgh, Oxford and Cambridge were also prize winners in the EPSRC competition. Daily Mail: The Tube as you've never seen it before: Amazing picture of London underground workers is among the winners in science photo contest Guardian: Award-winning images of science in action