Insect-inspired robots, drones that go where no humans can and eye-controlled wheelchairs are just some of the exhibits in the Robot Zone.

The Imperial Festival is a free celebration of science and research at the College, with exhibits, hands-on demonstrations and workshops running alongside a talk programme and a series of music and dance performances.

This year the perennially popular Robot Zone returns and promises to be bigger and better than ever. A huge net will provide flying space for drones, insect-inspired robots will roam around a tunnel and robots designed to be worn on the body will also be on display.

One Imperial researcher who will be putting his work on show is Dr Ravi Vaidyanathan who is from the Department of Mechanical Engineering. He said: “We are looking at how bionics can enhance human performance. On our Bionic Augmentation stand, festival visitors will be able to punch with smart boxing gloves, operate a bionic limb and see how a person can control a robot with their own body.”

“We hope the Robot Zone will inspire a new generation of scientists and doctors into a career in medical technology,” says Dr Ferdinando y Baena, from the Department of Mechanical Engineering, whose Mechatronics in Medicine lab will showcase technologies designed to help medical staff.

New tools designed to make movement rehabilitation more effective will also be on show. “We have developed interactive games that aim to make stroke recovery more entertaining and efficient. Visitors will be able to try the games and evaluate their movement skills,” says Professor Etienne Burdet, from the Department of Bioengineering. 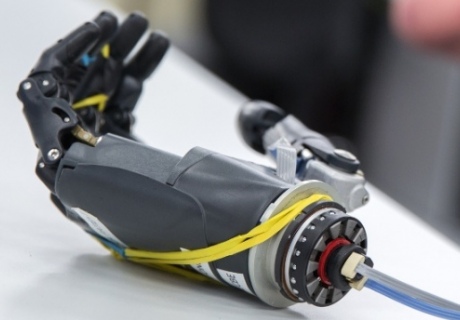 Experts in artificial intelligence will also join the Robot Zone for the first time.

“I’m interested in better understanding how the human brain works so that in the future we can use that knowledge to build more intelligent robots,” says computer scientist and exhibitor Dr Emma Robinson, from the Department of Computing.

“Some types of artificial intelligence, like visual systems, try to copy the way the human brain works. These machines can be incredibly impressive but ultimately their lack of real understanding can lead to some fairly amusing misinterpretations.”

Younger festival-goers who have with their own ideas for a robot can take part in the Hamlyn Centre’s School Robot Challenge. This asks budding engineers to design a robot then build it in a virtual world. They can also collect stickers of robot-parts from around the exhibition and use them to create a robot to take home.