Creative computers and 3D printed iPhones: experts map out the future of design Academics, business leaders and industry experts gathered at Imperial on Friday to explore game-changing advances in materials and design.

The annual Tech Foresight showcase event, organised by Imperial Business Partners, demonstrated the ways that breakthrough advances in materials research, design and manufacturing could transform business and society over the next 20 years.

Opening the presentations, Professor Mary Ryan, Professor of Materials Science & Nanotechnology, asked: “What if we could make a material that lasts forever?” and explored the trade-offs between longevity, sustainability and economic value. In the future, she argued, we will be able to control the way and speed at which that materials degrade to tailor them for specific uses.

Dr Billy Wu, from the Dyson School of Design Engineering, talked about the future of 3d printing. In order to realise the true potential of the technique, he argued, completely new ways of applying material will be needed. He asked the audience to consider a time where we could ‘print’ a new iPhone from the materials of an old one – allowing us to upgrade hardware in the same way we do software. 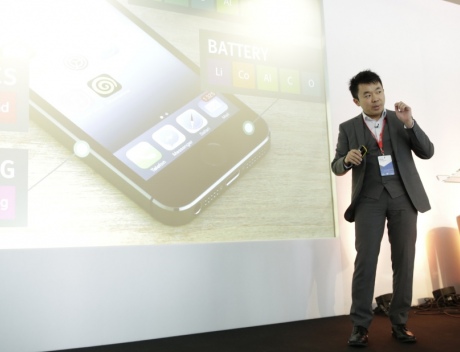 Will we be able to maker an iPhone using a 3D printer?

Others presenting at the event included Professor Saeema Ahmed-Kristensen, Chair in Design Engineering and Design methodology, who asked whether computers could one day bring the same creativity to design as humans do.  Prof Neil Mansfield, Chair in Design Engineering and Human Factors, discussed how greater diversity among technology users – including aging populations and the growth of hacking culture – means that design will have to adapt to meet the needs of different groups.

Imperial students took to the stage to pitch their innovations and budding start-ups to the audience, which included many business leaders.

Nick Aristidou and Will Joyce, winners of this year’s Venture Catalyst Challenge, took home another gong - the IBP award - for BioNet:  their start-up which has develop edible plastic wrapping for hay bales to reduce farming waste. 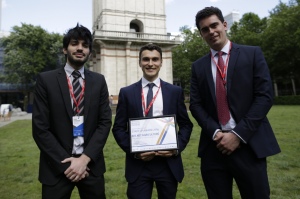 Others presenting included Ryan Robinson from Aeropowder - a start-up which makes use of feather waste from poultry farming to create insulating materials for houses, Lauren Dickerson from Luangen – who developed a device that generates electricity from slow moving water, and Henrik Hagemann from CustoMem – who are using pioneering synthetic biology methods to create membranes that capture pollutants such as heavy metals from industrial wastewater. Henrik’s fellow co-founder Gabriella Santosa won the Althea-Imperial prize earlier this year for the innovation.

Guests at the event were able to see some of the latest tech to emerge from Imperial labs, including the robot DE NIRO – the newest member of the Robot Intelligence Lab. DE NIRO is designed to be good at safe physical interaction with humans, and attendees were able to interact directly with the robot by helping it stack cubes, insert a key into a lock, and take selfies with its in-hand camera. 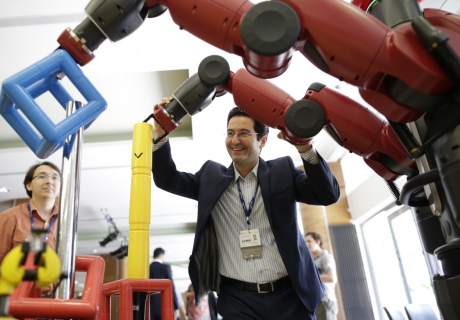 Professor Alice Gast, President of Imperial, said: “For companies and nations to remain competitive in today’s world, they must embrace technological advances or be left behind.” 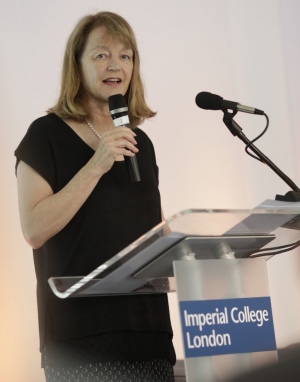 “It is more important than ever for businesses to be aware of cutting edge research, and for academics and businesses to work together to turn ideas and discoveries into innovations, inventions and solutions to problems. Through Tech Foresight 2036 we aim to stimulate this discussion, motivate future collaboration and ignite the imagination.”

The Tech Foresight event came at the end of London Technology week – a festival celebrating booming London’s technology sector. Predictions about technological change over the next 20 years, made by Imperial’s Tech Foresight team at last year’s showcase event, were put to the public this earlier this month as part of research to mark the launch of London Tech Week. The survey revealed the technologies consumers think will disrupt traditional industries over the next two decades – including driverless cars, the 3d printing of organs, and clothing connected to the internet.

Members have access to range of services through their relationship with IBP, including professional development, mentoring and consultancy services.

They run the annual Tech Foresight showcase event, which offers challenging, provocative and personal visions of the future from Imperial's world-leading academics. City AM: VR doctors and drone delivered pizza: The six ways tech will change our lives in the next 20 years The Independent: Drone pizza delivery, connected clothes and VR doctors: Britons predict 6 ways tech will change their lives by 2036 The Mirror: Virtual reality GP appointments and internet-enabled trousers - here's the tech Brits want by 2036