Plants' ability to slow climate change depends on their fungi Most plants associate with fungi in their roots

Scientists have discovered why only certain plants can take in extra carbon dioxide when levels rise and help to reduce global warming.

Plants take in carbon dioxide for growth, and in a greenhouse, raising the levels of carbon dioxide can boost their growth. This boost is known as the ‘CO2 fertilisation effect’.

Our paper is... a huge step forward in climate science that will help make more accurate predictions of the effects of CO2 in the future.

This effect also works on a global scale, with plants currently absorbing about 30 percent of human CO2 emissions. This helps to remove some extra CO2 from the atmosphere, slowing down the rate of climate change.

However, it was not known whether this effect would continue indefinitely, and plants would continue to take up the same percentage of extra CO2 emissions with rising levels. Experiments across the world that increase CO2 levels beyond current levels have given mixed results, with some showing greatly increased plant growth and associated CO2 uptake, and others showing little to no additional growth and uptake.

Now, new research led by scientists from Imperial College London has revealed that fungi are key to understanding how plants will behave. The study is published today in Science, and includes researchers from Northern Arizona University, Indiana University and the University of Antwerp.

Most land plants associate with microscopic fungi in their roots, which provide their host plant with nutrients and water gleaned from the soil and receive carbohydrates in return.

Lead author César Terrer from Imperial’s Department of Life Sciences said: “Our paper is a potential closure to the CO2 fertilization debate, and a huge step forward in climate science that will help make more accurate predictions of the effects of CO2 in the future.”

Making the best of it 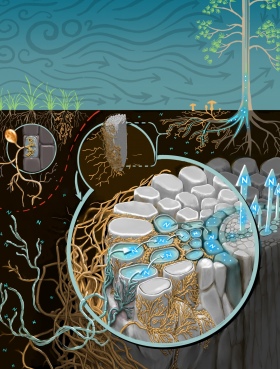 The type of fungus a plant associates with is important because they affect how much nitrogen a plant can access from the soil. Nitrogen is an important nutrient that aids growth, and if nitrogen levels are low in the soil, then some plants are not able to take up enough.

So, even though there is extra carbon dioxide in the air, they cannot make use of it because they cannot get enough nitrogen to help the process of growth. Some plants, however, are still able to take in enough nitrogen even when it is limited in the soil. The differing ability of the plants comes from which type of microscopic fungi they associate with.

Where the grass is greener

The team’s analysed 83 CO2 fertilisation experiments, and showed that how well plants can take advantage of extra CO2 depends primarily on whether they are ECM or AM type. ECM plants were able to grow on average 30 percent more with increased CO2 and limited nitrogen, whereas AM plants did not grow any extra at all.

This is important when considering that the world’s grasslands are predominantly AM type, and these areas often have limited nitrogen levels, so they will not be able to take advantage of the CO2 fertilization effect and help offset climate change.

However, Terrer notes that while this is a big step forward in creating a better picture of future CO2 levels, there are still other possible factors to consider: “It is important to be cautious when making predictions, because even though these experiments recreate the atmospheric CO2 concentration of the future, other effects of climate change are not taken into account, for example increased temperature or ozone concentration, which could diminish or even cancel the positive effects of CO2 in some plants.”

'Mycorrhizal association as a primary control of the CO2 fertilization effect' by César Terrer, Sara Vicca, Bruce A. Hungate, Richard P. Phillips and I. Colin Prentice is published in Science. New &pound;4.5m project aims to use bacteria to supply nitrogen to plants Extra carbon dioxide good for plants but bad for our water supply &apos;Holy grail' bacteria for crop farming debunked by scientists