&apos;Erotic jewellery' that helps women understand and explore their own sexual arousal has been developed by a student at Imperial.

Wan Ting Tseng, a postgraduate student from the Dyson School of Design Engineering, has created a collection of accessories which aim to encourage conversation about female sexuality and prioritise women's sexual desire.

Made from silicone and applied to the wrists, arms or neck, the modular devices – called Wisp - emulate subtle sensations such as fingertips on the skin or a lover’s breath. 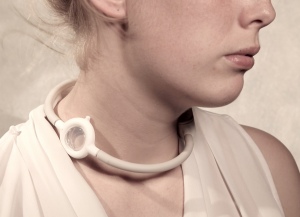 The devices can emulate a lover's breath on the neck

“There are lots of people who feel embarrassed to talk about sex and in some cultures it is still a taboo.” Wan Ting Tseng said. “I interviewed some women from China who said that they feel guilty or embarrassed when they become aroused. But of course, arousal is just human nature!” she added.

“I want girls to understand that it’s healthy to talk about sex and help them learn more about their own sexual desire.”

Tseng said that the product could potentially be used to help women who have difficulty enjoying sex and who want to reconnect with their sexuality.

“It’s a very subtle way to stimulate yourself and explore your body, which you can build up slowly,” she said.

The jewellery collection includes mini-motors which feel like light touches to the skin, and a modular necklace which contains a perfumer, auditory simulator and an air-blowing mechanism. Users can connect their phone to the device to play music of their choice, add their favourite fragrance, and adapt the temperature to their own preferences. 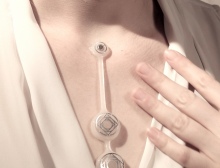 “I wanted to create a different, personal, and more sensual experience for women.” Tseng said. “Sex toys tend to be focussed only on orgasm. Of course that can be great but you lose the build-up of atmosphere. That’s what I’ve tried to recreate.”

“The accessories could be worn like jewellery. They’re beautiful objects in their own right – you don’t even need to switch them on. They’re not just sexual objects.”

One of the devices is a smart bracelet that monitors the user's arousal levels and is designed to help the wearer learn more about their own body. The device can also be used to send a discreet message to a partner.

Tseng recently showcased her innovation at the annual Imperial Show.

“If you don’t understand your own sexual desires, how can you communicate them to others?” Tseng said. “Although my original idea was for women, I have had positive feedback on the prototypes from men as well who want to understand more about their female partner”.

Tseng is a student on the  Innovation Design Engineering course, run jointly by the Dyson School of Design Engineering at Imperial, and the Royal College of Art. She created Wisp for her end of year project, and recently showcased it at the School's annual show.

Tseng said: “My background is in industrial design. Previously I’ve just designed commercial electronic items – such as laptops or computer accessories. When I started the Innovation Design Engineering course, I wanted to challenge myself, so I picked this unusual and intriguing topic.”

The courses are run jointly by Imperial’s Dyson School of Design Engineering and the Royal College of Art.