A British Paralympic swimmer will compete in Rio using a starting block aid developed by students at Imperial College London.

Andrew Mullen, who will swim in five events at the Maria Lenk Aquatics Centre, has been working with the students over the past few years to develop a number of innovative devices to help him in competition, training, and generally getting around. 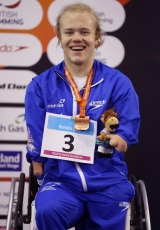 Probably Andrew’s best chance for gold at Rio will come in the 50m backstroke, having secured World Championship silver in 2015, and European gold (with European Record to boot) in 2016.

He will take to the starting blocks in this event next week using a device developed and honed by Imperial students Kathryn Sayer, Andrew Goodhead and Pui Sze Sham. The team worked on the project as part of Imperial’s summer Undergraduate Research Opportunities Programme (UROP) under the supervision of Dr Ian Radcliffe (Bioengineering).

Backstroke swimming events begin in the water, with competitors resting their submerged feet on a ledge and reaching up to set of bars on the poolside block to achieve a poised position from which they launch backwards into the water. It presents a unique set of challenges to Paralympic athletes. 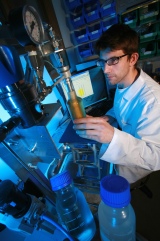 “There’s such a variety of competitors," says Dr Radcliffe (left). "Swimmers with one functional arm tend to just grab with that arm, while I've seen those without any arms have their coaches hold a towel and they bite down and hold on with their teeth until the starter goes.

“Andrew has some grip with his stumps but is not able to reach upto those bars which are quite high on the poolside out of the water. So he started using these luggage straps to wrap around the block then grip on, but they kept breaking. The students came up with this simple but elegant system, using adapted horse riding stirrups, climbing carabiner and reins. Crucially it’s easy for Andrew and his coach to set up and adjust.”

Andrew and the students took several prototypes with them to Glasgow for the IPC (International Paralympic Committee) World Swimming Championships and settled upon one variant, which Andrew has brought with him to Rio. He has two sets in his kit bag in case one fails.

“At Glasgow, Chris Furber, Performance Director for GB para-swimming, was ecstatic with the design and came over to myself and the students and gave us a big pat on the back,” Dr Radcliffe said.

In addition to the backstroke competition aid, a different group of Imperial students has been helping Andrew with his training.

Competitive swimmers often use hand paddles in training to provide added resistance for strength conditioning.These paddles have loops to place the fingers into, which proves difficult for Andrew. So the student team adapted some paddles, coming up with a variety of prototypes that better fit the ends of Andrew's arms – with a bespoke moulded variant proving particularly comfortable.

Andrew also does ‘dry land’ training in the gym with weights and machines. Single-sided squats are particularly beneficial for his fully functional right leg, however balance and posture was proving an issue. So a student group developed a rig that enabled better technique.

“It’s a gimbal rig with a lifting platform and a counter balance, so basically he can put his short left leg onto it then as he squats with the right, it will drop down with him and lift back up – kind of like those assisted dip and pull-up machines in the gym,” Dr Radcliffe said.

That rig is now permanently at the gym Andrew uses at the British Para-Swimming National Performance Centre in Manchester.

When Andrew returns from Rio, hopefully with medals in tow, he will be able to look forward to trialling some new Imperial technology.

To get around Andrew currently uses a standard wheelchair – using his longer right leg to push and drag himself forward on the ground. Yet this has drawbacks as Dr Radcliffe explains.

“It means he’s not sitting in the wheelchair properly and is always perched forward which is bad for his posture and creates loading stress on his leg. He also has a tendency to throw himself out of it because there’s no brakes. 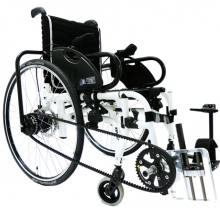 “The students developed a push-pedal driven system, working on a lever arm and uni-directional bearing, driving a crank − so that he can basically pedal and propel through a gear set. The latest iteration has electronic gear shifting and a knock steering setup so that he steer it with his other leg just by tapping side-to-side.”

That prototype wheelchair, developed under the supervision of Andy Brand (Dyson School of Design Engineering), will be delivered to Andrew once he returns to Manchester from Rio.

Hopefully Imperial's successful relationship with Andrew and British Para-Swimming will continue past Rio and beyond.

Students involved in the projects