Imperial's Professor Tom Pike discusses how a new mission to Mars, which recently got the green light, could tell us more about rocky planets.

The Interior Exploration using Seismic Investigations, Geodesy and Heat Transport (InSight) mission was originally scheduled to launch in March this year. However, it was suspended in December 2015 due to a fault in its main science instrument, called the Seismic Experiment for Interior Structure (SEIS). 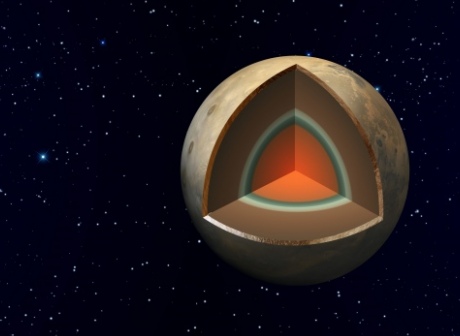 Professor Tom Pike, from Imperial’s Department of Electrical and Electronic Engineering, has been helping to build a microseismometer, around the size and weight of a one pound coin. It is part of the SEIS instrumentation and when switched on it will be able to detect microscopic tremors that may be rippling under the surface of Mars.

Colin Smith caught up with Professor Pike to find out what impact the mission may have on our understanding of rocky world’s like Earth, Venus, Mercury and planets beyond our solar system.

What can Martian tremors tell us about rocky planets?

The vibrations caused by tremors beneath Earth’s surface have helped us to understand in great detail the inner structure of our planet. We use seismic devices to work out how these vibrations, which are mostly unfelt, travel below us. This gives us the densities and types of material that make up our Earth

However, at the moment, we can only speculate about what’s inside the other rocky planets because we don’t have any concrete data. Better knowledge of the interior of just one other planet will allow us to improve our understanding of how planets like Earth emerged and evolved in the early period of the solar system. That’s not only important for our own planet’s origin, but it will also help us to understand how planets beyond our solar system might be formed.

So how will you detect these tremors? 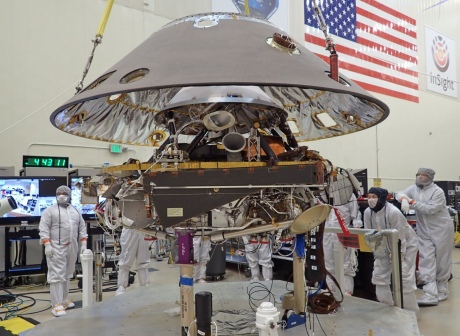 We use seismometers, which in very basic terms consist of a mass on a spring. The idea is that any tiny vibrations produced by Marsquakes will cause the mass to shake, and we will be able to detect these very small movements and transmit the data back to Earth for analysis. There are two types of seismometers, one built by us in the UK and another by a French team.

We are using silicon micromachining techniques to form our mass and spring out of a single crystal of silicon. We designed it and built it here in the micro-fabrication cleanrooms of Imperial’s Department of Electrical and Electronic Engineering.

What will the tremors actually teach you?

We hope to be able to learn more about Mars’ interior, and in particular if it has a molten core and we can use this information to determine if Mars ever had a magnetic field.

For Earth the magnetic field is generated by electric currents from convection in the molten core. This field radiates from Earth like a protective blanket, shielding us from many of the Sun’s harmful particles that are produced by the same nuclear processes that produce the Sun’s light.

We think that early Mars also had a magnetic field, which slowly weakened, leading to the decline of its atmosphere as the solar particles were then able to strip it away. Our mission may provide more concrete facts about how this may have happened.

What are the main technical challenges?

The tremors produced by a Marsquake are likely to be so small any heat loss in the suspension might drown out their signal. For the UK instrument, we have minimised this by using a single crystal silicon and we use a unique, and patented, geometry in its design to reduce the heat losses as the mass moves through the air.

The French team took a different approach and put their metal suspension in a vacuum to reduce the losses. This should allow them to see even smaller signals but it’s an additional complexity and it adds weight. Unfortunately, their vacuum enclosure failed a few months before launch and they were unable to repair it in time for it to get on board the rocket for the 2016 launch window to Mars. We were bolted into the payload and ready to go, but we didn’t get any further than Toulouse! The French, with the help of NASA’s Jet Propulsion Laboratory, have been busy since January fixing their seismometer.

What’s the new launch date and how will you be involved after then?

NASA have just given us the go-ahead for a May 2018 launch, and the mission should touch down in around two years’ time. We’ll be busy even before we land as we will be able to run our instrument on the way to Mars. There’s not much to detect in deep space, but it turns out that it is a good way to further test the performance of our seismometer.

Our first job after landing will be to get our seismic station off the deck of the spacecraft and on to the best patch of ground we can reach with our robot arm. Our microseismometer is able to start listening even while we’re still on the deck, mostly to the creaks and groans of the lander, and we’ll be busy trying to work out the quietest place to set it down which will muffle the spacecraft’s unwanted signal. We’ll be out at mission control at the Jet Propulsion Laboratory in Pasadena, USA, for this critical stage of the mission. When we’ve finished remotely setting the SEIS on the Martian surface, we’ll head back to London and start listening in earnest for any activity inside the planet. I’m hoping we will detect our first marsquakes before the end of 2018.

In 2008, the wet chemistry laboratory on the Phoenix lander, analysing Martian soil, found four per cent of it was composed of perchlorate. Perchlorate is a common ingredient of rocket fuel, and a possible resource for a return trip to Earth.

There is a layer of ice just below the surface. This was first directly identified by Phoenix in 2008, but since then orbiters have also identified white patches that show where meteorites have punched through the soil and exposed the ice below.

Oxygen is produced when ice is split into its constituent components – oxygen and water – via an electrolysis process. Oxygen is also a potential rocket propellant and NASA is planning to build a rocket fuel making pilot plant  on Mars in 2020.

The wind speed on Mars can reach up to 60 mph for sustained periods. Fortunately, as the atmosphere is only one per cent of the Earth’s, the Insight lander will not be blown over.

Dust devils, columns of dust and debris, are common on Mars, leaving dark tracks across the surface as they suck up the top layer of lighter coloured soil.

A quarter of Mars’ atmosphere freezes into solid carbon dioxide or dry ice during its northern winter, returning back into its gaseous form in the warmer spring. This process creates plumes of dust, helping to feed massive sandstorms that envelop the whole planet.