One person's trash being another's treasure is certainly true in the case of one Imperial student who is finding new uses for chicken feather waste.

Dyson School of Design Engineering PhD student Elena Dieckmann, together with her co-founder, Ryan Robinson, a PhD student from the National Heart and Lung Institute, created a start-up in 2016 called Aeropowder looking to develop new ways to use surplus chicken feathers. 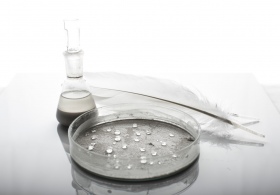 Elena said: “What most people forget is that by eating chicken we produce a huge amount of feathers. The poultry industry in the UK creates 2000 tonnes of feather waste each week alone.

“Feathers are actually an amazing and versatile material. They’re lightweight, biodegradable and water repellent and we believe we can produce something really useful with them.”

The pair’s aim, supported by Imperial Professor Chris Cheeseman, is to re-use some of the thousands of tonnes of waste chicken feathers produced in Britain’s poultry industry to create a new range of materials.

Professor Chris Cheeseman said: “It always seems strange to me that we put so much energy and effort into materials for them to be used for a short period of time and re-labelled as waste.

“My research is about looking for reuse applications for waste material. Feathers are a really interesting and clever material so we think there’s other applications we can use it for that would add value and keep it in the economic cycle.”

Taking a very experimental approach, the team took to the lab with 10kg of feathers to see what could be made with them. Following a process that included freeze drying, burning, and braiding them, their first breakthrough came in utilising the natural properties found in the feathers.

Elena explains: “One of the things we discovered is that feathers make a great insulator. Existing building insulation products are made from polyurethane, which is a non-renewable chemical and it’s not biodegradable.

“Our idea was to create a new insulation from the feathers. We made this new material that is high performance, sustainable, flame retardant and biodegradable at the same time.”

It was the thermal insulation, called Featherfill, which was the group’s first success –  winning them £20,000 at this year’s Mayor of London’s Low Carbon Entrepreneur Challenge competition.

The group have since gone onto develop a range of other product prototypes using the natural properties of the feathers to new effect.

Elena explains: “We’ve also created a water repellent coating that renders the any surface hydrophobic. You can also use feathers as a super lightweight filler for plastics and we even made a structural fibre that can be used to reinforce concrete.”

Whilst still in the developmental stages, Aeropowder has continued to gain interest and award success as they look to develop new products and processes to bring their ideas to market.

The team won a Shell LiveWIRE Smarter Future Award earlier this year, and were shortlisted for the Travis Perkins Innovation Award and placed third in the International Student Innovation Awards.

With such a simple idea and a great concept it won’t be long before people are flocking to feather based solutions as they look for sustainable ideas for the future. The innovators: greener home insulation to feather your nest