Representatives from Imperial are travelling to Morocco to attend the United Nations climate change conference (COP22), which starts today.

For two weeks in one of the country's major cities, Marrakech, staff, students and climate communicators will engage with international policymakers, learn about the negotiation process and talk about how research, innovation and finance can provide solutions to the climate change problem.

The Grantham Institute, together with Imperial College Business School, are also organising an official side-event at the conference, to encourage discussion about how investment banks that target companies developing low-emission technologies, and other funding schemes will be needed to tackle climate change.

THE STORY SO FAR

The Paris Agreement was drawn up at the COP21 conference in Paris in December 2015, where 197 nations agreed to limit global warming to 'well below two degrees' above pre-industrial temperatures, and to aim for a more ambitious limit of one and a half degrees.

Throughout the year, governments have confirmed their commitment to the treaty, and reducing their emission of greenhouse gases like carbon dioxide and methane from sources such as industrial processes, fossil fuel power plants, combustion engines and agriculture. 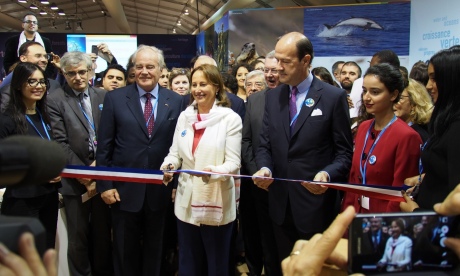 By 5 October more than 55 countries, representing more than 55 per cent of global greenhouse gas emissions and including the largest emitters (the European Union, China, India and the United States), had accepted the Agreement's terms – enough for the UN to confirm it would come into effect this month.

Grantham Institute Co-Director, Professor Joanna Haigh, said: "It was remarkable that 195 countries unanimously reached an agreement in Paris. Even more amazing was that the primary stated objective, of keeping the average global warming below one and a half degrees, was not even on the table before that meeting. A further achievement is that the treaty has legally entered into force within less than 12 months. All that is hugely important."

DEVIL IN THE DETAILS

As next steps, delegates at the COP22 conference will flesh out details of the concepts and principles agreed in Paris. Amongst these are provisions for adapting to climate change, financial contributions from industrialised nations to those at risk from the effects, rules about tracking progress of mitigation, and the potential to use trading or market mechanisms to deliver its goals.

"The devil is usually in the detail of such an agreement – so getting these right in Marrakech really matters," said Alyssa Gilbert, Grantham Institute Head of Policy and Translation.

Grantham Institute Senior Policy Research Fellow, Ajay Gambhir, said: "On the positive side, countries have pledged to reduce their greenhouse gas emissions, with a transparency and accountability framework that is likely to encourage countries to step up their action.

"Right now there are no legally binding targets on individual countries and regions, and the current voluntary pledges are inadequate in putting us on a path towards the Agreement’s goal of keeping global warming 'well below two degrees'," explains Gambhir. 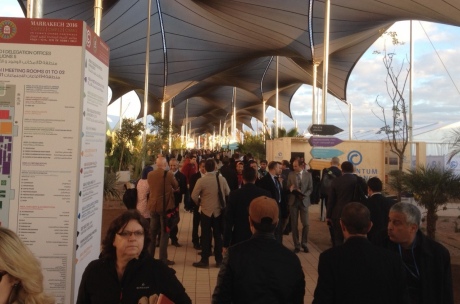 Oliver Schmidt takes in the scene at the COP22 conference centre

International efforts will be needed to increase governments' ambitions for the Nationally Determined Contributions to the reduction of greenhouse gas emissions, and to reach some agreement on methods for their monitoring and verification.

Gilbert is particularly interested in the plans to keep track of progress starting with a so-called 'global stocktake' in 2023.

"There is an ongoing debate on the appropriate levels of transparency and reporting on countries' progress. The delegates in Marrakech will be thrashing out some of the details of what these protocols will look like," she said.

National delegates to the climate summit will add details to the Agreement and demonstrate their home countries are willing to progress from setting an ambitious goal to actually working towards achieving it.

Professor Haigh said: "The immediate next steps should be for governments to implement the easy-to-achieve energy saving measures such as improving efficiency and reducing waste. They must act fast on reducing urban pollution, facilitating low-emission transport and reducing meat consumption; all of which would deliver benefits, and future cost-savings, for public health and sustainable development".

Gambhir added: "The flow of finance from industrialised countries to help poorer countries tackle climate change remains a sticking point. At this stage, very little money has been committed – compared to what’s been estimated to be needed – and the Agreement makes no legal requirement for specific funds to flow.

"However, developing countries are unlikely to withdraw from the process, given that climate change is an existential issue for many of them, threatening rising sea levels and a range of other harmful impacts."

Speaking to national journalists at a Science Media Centre press conference last Tuesday, Professor Haigh said: "Research and development funds for innovation in clean technology were promised in Paris by governments and the private sector, and these should be mobilised without delay."

Research and development funds for innovation in clean technology were promised in Paris by governments and the private sector, and these should be mobilised without delay

She added today: "The business and finance communities need to be fully involved as partners in achieving the necessary progress, and efforts should be made to expand the emissions trading markets already operating very successfully in a few parts of the world."

At the COP22 conference in Marrakech, representatives from Imperial College London are teaming up with the Institution of Chemical Engineers and Natural Resources Defense Council (NRDC) to discuss the financial mechanisms needed to encourage investment in low-carbon technologies and storage to stimulate a step change in deployment of the more mature technologies.

The event, "Investing in the planet: Green banks and other financial tools to scale up mitigation technologies" will take place at the COP22 Conference centre on 14 November 2016, and is open to all official conference delegates. It will also be live streamed.