The number of people in the world with high blood pressure has reached 1.13 billion, according to new research.

The study, led by scientists at Imperial College London, reveals the number of people with high blood pressure has nearly doubled in 40 years.

The team studied changes in blood pressure in every country in the world between 1975 and 2015.

The largest ever study of its kind, the research involved the World Health Organization and hundreds of scientists throughout the world, and incorporated blood pressure measurements from nearly 20 million people.

Interactive maps and individual country data are available at www.ncdrisc.org.

The findings, published in the journal The Lancet, showed that while blood pressure has dropped sharply in high-income countries, it has risen in many low and middle-income countries, especially those in Africa and South Asia.

The UK was found to be the European country with the lowest proportion of people with high blood pressure in 2015, while South Korea, USA and Canada were lowest in the world.

Professor Majid Ezzati, senior author of the study at the School of Public Health at Imperial said: “High blood pressure is no longer related to affluence – as it was in 1975 – but is now a major health issue linked with poverty.”

The authors say the reason for this finding is unclear, but it may be linked to overall better health and increased consumption of fruits and vegetables. The condition is also caught more frequently, and earlier, and managed with medication in high-income countries. These factors may have helped counteract rising obesity, which is a risk factor for high blood pressure. 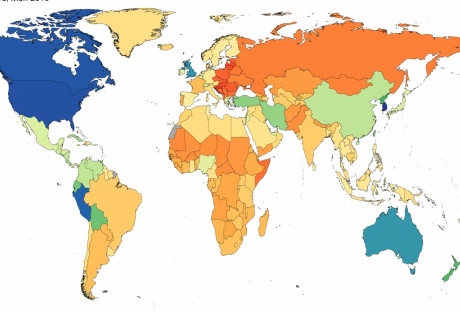 Professor Ezzati added that poor nutrition in childhood in low income countries may also play a role in the study findings: “Increasing evidence suggests poor nutrition in early life years increases risk of the high blood pressure in later life, which may explain the growing problem in poor countries.”

The research, funded by the Wellcome Trust, also revealed men had higher blood pressure than women in most countries in the world in 2015. Globally, 597 million men had raised blood pressure, compared to 529 million women. 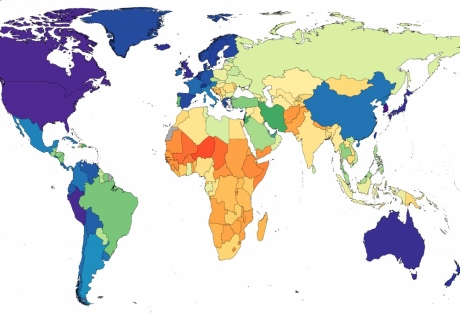 The study showed that much of the rise in the number of people with high blood pressure over the last 40 years is also due to a larger, and older, world population.

High blood pressure puts extra strain on the blood vessels and major organs such as heart, brain and kidneys. It is the world’s leading cause of cardiovascular disease, which leads to stroke and heart attacks, and is thought to cause 7.5 million deaths a year across the globe.

Blood pressure is defined by two numbers: systolic pressure, which represents the force your heart pumps blood into the blood vessels, and diastolic pressure, which is a measure of the resistance to the blood flow in the body’s blood vessels. Both numbers are measured in millimetres of mercury (mmHg). High blood pressure is defined as 140/90 mmHg or higher.

The team explained the condition is caused by a number of factors including dietary influences, such as eating too much salt and not enough fruit and vegetables, obesity, insufficient exercise and some environmental factors such as lead exposure and air pollution. The condition is more common in older ages.

Countries with the highest pressure

Tackling the epidemic of high blood pressure in low and middle-income countries is one of the most pressing global health challenges, added Professor Ezzati.

“We need economic means and regulation to improve access to high quality food, especially fruits and vegetables, and reduce excessive salt in food. We also need a stronger healthcare system, to identify people with high blood pressure earlier, and improve access to treatment and medication. Without these measures, the world is unlikely to achieve the World Health Organization’s target of reducing the proportion of people with high blood pressure by 25 per cent by 2025.”

The other findings of the paper included:

The team added there were limitations of the study, for instance some countries, particularly those in sub-Saharan Africa and the Caribbean, had less data than others or the data were older. Furthermore, the equipment used to measure blood pressure has changed since 1975 – with most monitors now digital rather than a level of mercury rising on a measure.

The research was funded by the Wellcome Trust

"Worldwide trends in blood pressure from 1975 to 2015: a pooled analysis of 1479 population-based measurement studies with 19·1 million participants" is published in Lancet.

Dutch men and Latvian women tallest in world according to 100-year height study Cost of diabetes hits 825 billion dollars a year, according to new study World's obese population hits 640 million, according to largest ever study