How the properties of clouds change in response to local pollution - mainly from coal burning and ship engines - has been more accurately determined.

This finding, published today in Proceedings of the National Academy of Sciences, could help scientists to better model what future global temperatures will be with increased greenhouse gas concentrations.

Knowing how aerosols have modified cloud properties in the past and present climate helps us to better understand how much the Earth is likely to warm under different future scenarios of greenhouse gas levels.

Clouds are accumulations of water droplets that usually form around very small particles, known as aerosols. These aerosols include desert dust, soot or compounds called sulphates.

Human activities can increase the local concentrations of these aerosols. For example, burning coal releases soot and sulphates, creating local hotspots of aerosols over power plants or cities.

Scientists know that these local hotspots of aerosols change the properties of clouds by providing them with more aerosols to form drops around, creating clouds with a greater number of smaller droplets than normal clouds. These clouds are also brighter than clouds not affected by pollution.

The brighter clouds reflect more of the incoming sunlight, providing a local cooling effect. This means that while human activities are warming the planet, through the release of greenhouse gases like carbon dioxide, they are also helping to cool parts of the planet, by releasing pollution aerosols.

Lead author Dr Edward Gryspeerdt from the Department of Physics at Imperial, who is presenting the research today at the European Geosciences Union General Assembly  in Vienna said: “Burning fossil fuels releases greenhouse gases, but often also aerosols that can make clouds reflect more sunlight back into space. Human activities thus have both a warming and a cooling effect.

“Although the cooling effect is much smaller than the warming effect, knowing how aerosols have modified cloud properties in the past and present climate helps us to better understand how much the Earth is likely to warm under different future scenarios of greenhouse gas levels.”

Aerosols and clouds vary significantly across the globe. Satellite data can be used to determine how aerosols influence clouds properties, but this method comes with a number of uncertainties, particularly surrounding how scientists measure the aerosol from space. 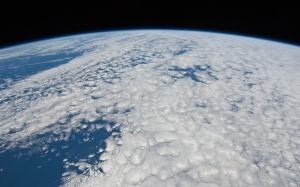 Now, a team led by researchers at Imperial have found a more accurate way of predicting the effect using a different measure of the aerosol properties gathered from satellite data.

This measure includes information about the size of the aerosol particles, which is related to how easily cloud droplets can form around them. This will allow climate modellers to more accurately tease apart the different factors affecting global temperatures.

It is harder for cloud droplets to form around some aerosols, like desert dust and soot, compared to other aerosols, such as sulphates, which are more efficient at brightening clouds.

Before the industrial revolution and the mass burning of fossil fuels, there were less sulphates, which create brighter clouds with smaller droplets.

This means that if researchers tried to compare the cooling effect of clouds around today and those in the past based purely on the amount of aerosols present, they would not have been able to because the clouds’ response to the aerosol would be different.

Using several different global climate models, the team showed that by using satellites to determine extra information about the aerosol size, the uncertainties caused by variations in aerosol type could be reduced.  This means that the change in cloud properties due to human activity can be determined more accurately.

The measure can be gained from satellite observations of clouds, meaning that climate modellers can use more accurate figures for cloud reflectance through time, improving their predictions for climate change.

'How accurately can the instantaneous aerosol influence on cloud albedo be constrained?' by Edward Gryspeerdt et al is published in Proceedings of the National Academy of Sciences.

What makes a cloud rain?: Meet the researchers in person at the Imperial Festival (6-7 May)

Dr Gryspeerdt and team will talk live about their research at the Imperial Festival (6-7 May, South Kensington) – the College’s free public celebration of science, engineering and creativity.

Come and find out how the scientists are using data from satellites, aircraft and simulations to answer these questions and investigate what will happen to clouds in a changing climate.

Click for further information on the exhibit on Saturday 6 and Sunday 7 May.

Register for the Imperial Festival.