A special event will showcase European Research Council-supported research this Friday at Imperial.

ERC President Jean-Pierre Bourguignon is to visit the College as part of the 10th anniversary celebrations for the EU’s research council.

Professor Bourguignon will meet scores of Imperial researchers who have benefited from ERC grants, alongside the Provost James Stirling and Vice Provost (Research) Nick Jennings.

Over the last decade, the ERC has supported more than 100 grants across all four faculties of the College, investing €160 million, making Imperial one of Europe’s top beneficiaries of the ERC’s excellence-based funding.

“We hope that we can help others to follow Imperial in embracing discovery, supporting great people and being open to the world.”

Professor Alice Gast, President of Imperial College London, said: “Over 10 years, the European Research Council has had a profound impact on European science and society. Talk to any leading European researcher – from rising stars to the most eminent scholars – and, more often than not, you will find the ERC has helped them on their way.

“But dig deeper, and you will find it is our communities that gain the most. Nanotechnologists are mending broken bodies. Electrosurgeons are beating cancer. Biomedical engineers are reshaping personalised medicine. Chemists are building high-growth green industries. Behavioural economists are empowering smart cities.

"ERC-supported research like this improves our health, wellbeing, environment and economy.

“The ERC’s forward-looking mindset, investment in frontier research, and an openness to bottom-up innovations is putting Europe at the forefront of global science.”

Speaking ahead of his visit to the College, Jean-Pierre Bourguignon, President of the European Research Council, said: “We hope that we can help others to follow Imperial College in embracing discovery, supporting great people and being open to the world.”

Among Imperial’s winners of ERC grants is Professor Daniel Rueckert, Head of the Department of Computing and an expert in visual information processing. Professor Rueckert’s ERC Synergy grant supports his work on the Developing Human Connectome project, which works to provide insights into fundamental neural processes and intractable neuropsychiatric diseases. 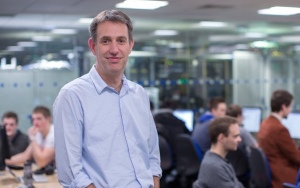 “The ERC synergy grant really has transformed my career because it has really given me a lot of independence, a lot of international visibility and a lot of opportunities to collaborate with the best scientists in the world. It has also given me long-term funding and long-term stability to pursue quite blue-sky research.”

Dr Jia Li, Lecturer in Human Development and Microbial Signalling, won support for her work to investigate the long-term effect of bariatric surgery. “It focuses on the gut microbial effect on the colon cancer risk after the weight loss surgery,” she explained.

“Having an ERC grant provides me with the next five years’ financial support. Hopefully in the next five years my research will be transformed in a new and exciting way. I’d like to thank ERC for this great opportunity; it’s definitely the key of my career.” He said: “In my research we’re trying to use very, very powerful lasers to create matter under really high pressures and densities and then use very, very short flashes of X-rays to probe these extreme conditions. These pressures are so high that they’re normally only found in the centre of stars or planets.

“Without the ERC funding, there’s very little chance this research programme would have gone ahead, but with any other funding source. It’s the ability to do really cutting edge, high risk projects that was important.”

For further information or to attend this Friday’s showcase and to register, visit the Imperial Events page.

Imperial’s deep ties with the ERC can be traced back to its beginnings. The founding ERC President Fotis Kafatos, who led the organisation between 2007 and 2010, was also Professor and Chair of Immunogenomics at Imperial from 2005. Professor Kafatos was one of the first scientists to introduce molecular biology to the study of animal development, helping develop cDNA synthesis, cloning and sequencing, and dot-blot. He retains an emeritus role at the College.