How bacteria turbocharged their motors Using detailed 3D images, researchers have shown how bacteria have evolved molecular motors of different powers to optimise their swimming.

The discovery, by a team from Imperial College London, provides insights into evolution at the molecular scale.

Bacteria use molecular motors just tens of nanometres wide to spin a tail (or ‘flagellum’) that pushes them through their habitat. Like human-made motors, the structure of these nanoscale machines determines their power and the bacteria’s swimming ability.

Bacterial motors are complex machines, but with studies like this we can see how they have evolved in distinct steps.

Previously, the team from the Department of Life Sciences at Imperial looked at these motors and discovered a key factor that determined how strongly bacteria could swim. Like human-made motors, bacterial motors have distinct ‘stator’ and ‘rotor’ components that spin against each other.

The team found that the more stator structures the bacterial motor possessed, the larger its turning force, and the stronger the bacterium swam. Despite these differences, DNA sequence analysis shows that the core motors are ancestrally related. This led scientists to question how structure and swimming diversity evolved from the same core design.

Now, in new research published today in the journal  Scientific Reports, the researchers were able to build a ‘family tree’ of bacterial motors by combining 3D imaging with DNA analysis. This allowed them to understand what ancestral motors may have looked like, and how they could have evolved into the sophisticated motors seen today. 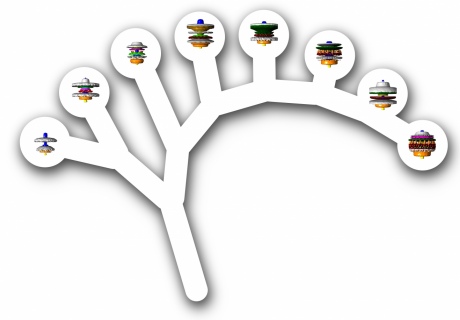 This clear separation between primitive and sophisticated species represents a “quantum leap” in evolution, according to the researchers. Their study reveals that the increase in motor power capacity is likely the result of existing structures fusing. This forms a structural scaffold to incorporate more stators, which combine to drive rotation with higher force.

Lead researcher Dr Morgan Beeby said: “We are used to observing evolution at the scale of animals or plants, such as the giraffe’s neck slowly getting longer over time to reach previously inaccessible food.

“However, the evolution at the molecular scale is much more radical. It’s like a giraffe having children with necks suddenly a metre longer.”

To carry out the study, the team visualised a number of motors from different species of bacteria using a variant of a method called cryo-electron microscopy, whose pioneers were awarded the Nobel Prize in Chemistry this year.

The method involves flash-freezing the motors inside living cells. Once frozen, they can be imaged from all angles to build up a 3D picture of what the motor looks like inside the cell. 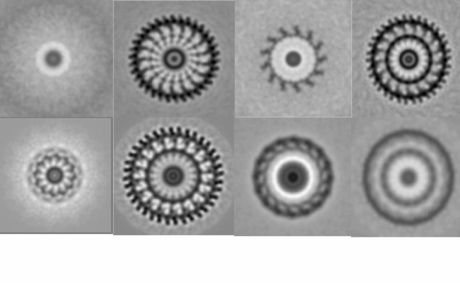 They then built up a ‘family tree’ of the species using DNA sequence analysis, which related their swimming ability and motor properties. They found that bacteria with 17 or more stators, and their relatives, had extra structures attached to their motors.

The researchers believe that these extra structures fused in sophisticated bacteria to provide a larger scaffold for supporting more stators.

However, they also say that this was likely not a one-time event. The extra structures appear to have evolved many times in different species of bacteria, using different building blocks but producing the same functionality.

Eyes have also emerged multiple times, and there is good evidence that nervous systems have evolved several times, with some creatures possessing strange systems unlike the brains and spinal cords we are used to.

Dr Beeby said: “Bacterial motors are complex machines, but with studies like this we can see how they have evolved in distinct steps.

"Moreover, the ‘leap’ from 12 stators to 17, while a great innovation, has an aspect of ‘biological inevitability’ in the same way as wings, eyes, or nervous systems in higher animals: the precursors of high torque have evolved multiple times, and one set of them ended up fusing to form the scaffold we describe in our work”.

He added: “Evolution is a creative process, often drawing on variations upon a theme. It is constantly churning out new molecular ideas, many of which fail, but inevitably some get realised multiple times. We have seen this in animals, and now we see this process in the nanoscopic world of molecular evolution too.”