Ebola virus with an immune cell.

A prototype device for gauging patients' immunity to Ebola has been developed by a multi-institutional team of experts led by Imperial College London.

The device, which was developed in collaboration with UCL, works in a similar way to a pregnancy test. However instead of detecting hormones, it looks for an antibody called Immunoglobulin G (IgG), which is released following exposure to certain viruses.

We see great potential in this approach to help combat future Ebola outbreaks.

So far the biosensor has undergone a pilot trial under laboratory conditions, as well as in Uganda, where it was used to analyse blood serum from survivors previously exposed to the Ebola virus. In the trial the test was able to detect IgG antibodies from samples in around 15 minutes, compared to around five hours using conventional lab-based equipment.

The researchers say the technology requires optimisation and further study. However, they believe it shows promise as a rapid response tool for treating patients with Ebola, especially in remote areas of developing countries, where access to medical care is limited.

Professor Molly Stevens, Deputy Director of the “i-sense” Interdisciplinary Research Collaboration from Imperial’s Departments of both Materials and Bioengineering, said: “We’ve designed this biosensor to be highly effective at the point of care for a range of diseases. We see great potential in this approach to help combat future Ebola outbreaks.” 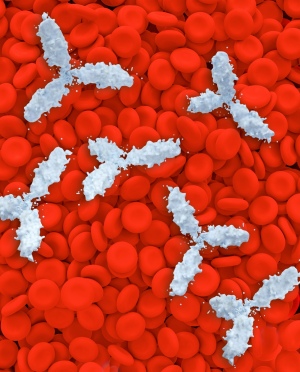 The device detects antibodies, like those shown here (in blue).

The tool contains proteins that bind to IgG when it is present. Upon binding, the proteins release a dye and stain the reader, much like how a pregnancy test does in the presence of pregnancy hormones, by using a technique known as ELISA. The result, along with its geographical coordinates, is communicated to the smartphone device and stored in an electronic archive.

The team say identifying IgG antibodies might help healthcare workers to understand the effects of exposure to different strains of the Ebola virus. The device may also enable doctors to detect immunity levels in patients during the early stages of their recovery, and help to understand vulnerable people's vaccination needs.

The next step for the team will be to streamline the test so that it can analyse blood taken from a finger prick, so that the results can be given immediately.