The Minister chose Imperial for his first official visit to a university and announced a £70 million funding boost for UK medicines.

This investment will not only support high-value, highly-skilled jobs but will develop lifesaving treatments that could change lives across the UK.

The extra funding, through the Industrial Strategy Challenge Fund, will support projects including new manufacturing centres to speed up the production of medicine and new virtual reality projects to help patient recovery. 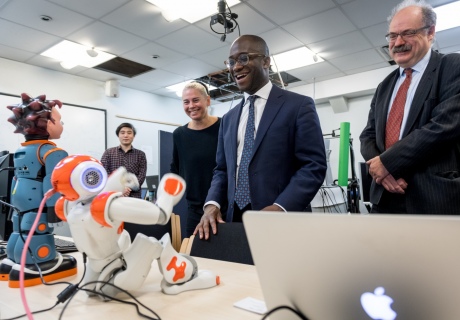 Professor Maja Pantic, from the Department of Computing, demonstrated her team’s work into a robot, called Zeno, which can improve learning and emotional understanding in children with autism.

After testing the technology himself, the Minister described the robot as ‘brilliant’ and asked what sort of impact it could have on helping people with autism.

Professor Pantic explained that children with the condition sometimes struggle to show facial expressions but became really engaged with the robot. Professor Pantic also told the Minister that the work depended on working collaboratively with a ‘big network’ of European partners.

Professor Daniel Rueckert, Head of the Department of Computing, then explained his research into using AI to help radiologists interpret and analyse data from brain scans. Professor Rueckert said that tools they were developing will ‘give clinicians richer, quantitative information’ and will measure biomarkers – making diagnosis of conditions such as Alzheimer’s easier.

Next generation of surgical robots 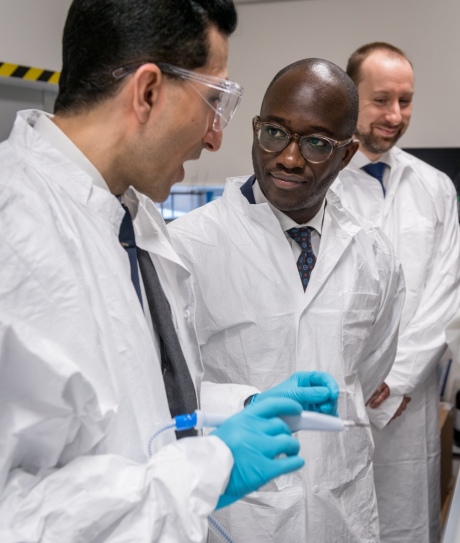 Science Minister Sam Gyimah learns how to use the iKnife

The Minister then visited the Department of Surgery and Cancer where he met Professor Zoltan Takats.

Professor Takats demonstrated the innovative iKnife which can tell surgeons immediately whether the tissue they are cutting is cancerous or not. The iKnife is based on electrosurgery and the first study to test it revealed a 100 per cent accuracy for the technology.

The Minister then visited the Hamlyn Centre to see the progress being made with surgical robotics.

Dr Robert Merrifield, the Director of Operations, explained how the Hamlyn Centre plays a key role in UK robotics and they are developing small, handheld tools to ‘augment surgeons’ skills’. Dr Merrifield said they are ‘focusing on the next generation of surgical robots’, some of which are the ‘width of a human hair’. 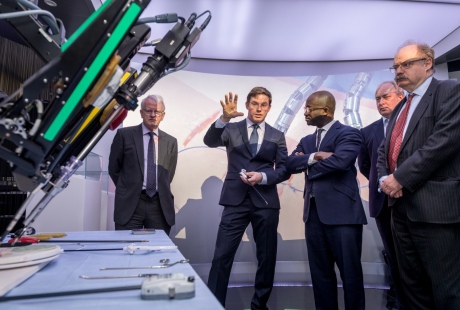 Imperial’s Provost, Professor James Stirling, said: “Imperial were proud to welcome the new Science Minister on his first official trip to a university and share with him some examples of our exciting and world-leading research.

“The Minister saw how our scientists and engineers are developing new technologies to improve outcomes for patients and help save more lives.

“Continued Government support for university research is essential for us to keep inventing and innovating to tackle global challenges.”

The government says its investment in high tech medical research will in turn boost jobs, enhance the NHS and ensure better care for people when they are unwell.

Speaking about the new funding, Universities and Science Minister Sam Gyimah said: “Through our ambitious, modern Industrial Strategy we want to unlock the innovations that will help people live better, longer lives by developing the medicines of the future. This investment will not only support high-value, highly-skilled jobs but will develop lifesaving treatments that could change lives across the UK.”

Imperial has an extensive network of researchers in robotics applications. Represented by the Robotics Forum, they are actively seeking to solve some of societies greatest challenges in the areas of healthcare, domestic and assistive robotics and smart and interconnected cities.