The SCI is a collaborative project to assist countries in sub Saharan Africa control schistosomiasis, intestinal helminths and other Neglected Tropical Diseases (NTDs). The SCI was awarded a prestigous Queens Anniversary Prize (2008), and a medal and certificate were collected from Buckingham Palace on February 14th 2008.

Schistosomiasis is a parasitic disease that leads to chronic ill-health and affects more than 200 million people in developing countries, 85% of them in sub-Saharan Africa. Approximately 600 million people are at risk of contracting schistosomiasis because they live in tropical regions where water supply and sanitation are inadequate or non-existent.

The SCI was originally supported by the Bill and Melinda Gates Foundation, through several grants since 2002, for work in six countries, Burkina Faso, Mali, Niger, Tanzania (including Zanzibar), Uganda and Zambia, and for research into cysticercosis. In 2007, Geneva Global awarded funds for control work in Rwanda and Burundi - with new funding both countries are still receiving support . SCI works in partnership with the World Health Organisation. SCI participated in the USAID/NTD control project as country managers for Burkina Faso, Niger and Uganda from 2006-2011. SCI is a technical assistance partner in the World Bank funded project to control schistosomiasis in Yemen, and is a partner in the SCORE project managing their programmes in Mozambique and Niger.

SCI's current major funding sources are the 2010 and 2014 awards by DFID (UK) to deliver 200 million treatments against schistosomiasis and STH over 5 years to 10 countries in Africa. Other donors include the Foundation Good Ventures and the ENDFUND and many private donors who we hope will allow us to reach 300 million treatments delivered by 2019.

SCI is recommended as top charity by www.givingwhatwecan.org in UK, and is one of the top international charities recommended by www.givewell.org in USA. Donations may be through our website http://www3.imperial.ac.uk/schisto where our funds are held by the College in a ringfenced account. Donors can also donate via the Charity IC TRUST (Charity Number 273071), but in both cases please specify the funds are for SCI. Donated funds are used for treatment of schistosomiasis with praziquantel and intestinal worms with Albendazole at an average cost of approximately 30 pence per child per year.

Further information on this unique programme can be found on the SCI website at http://www3.imperial.ac.uk/schisto .

I am a course director for a short course first run in June 2008. The course uses top faculty to give an overview of Global health. The next course will start on the last Monday in June. 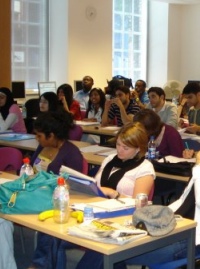 The course has been repeated annually with the attendance of 70 participants including health professionals plus students from Imperial, other UK and international universities. Participants explore the complex issues of global health including health inequalities, health systems, the impact of climate change, globalisation, migration, newly emerging infections, conflict and humanitarian interventions. Participants have the opportunity to join a debate on the role of pharmaceutical companies in global health. The online student evaluation was excellent.  For discussion and to keep in touch why not join our facebook group?

Fenwick A, 2019, Egypt's schistosomiasis control programme in the 1980s prepared the ground for the global elimination of schistosomiasis by 2030, Transactions of the Royal Society of Tropical Medicine and Hygiene, Vol:113, ISSN:0035-9203, Pages:1-3