Simulation-based learning is increasingly accepted not only as a viable alternative to the traditional apprenticeship model, but as a vital component of medical training and safer clinical practice. Surgical simulation is an extremely challenging area of research combining medical imagery, computer graphics, mathematical modelling and Human Computer Interfacing (HCI). Recent advances make it possible to represent and interact with complex tissue structures through suitable haptic interfaces, but a great deal of research in soft tissue modelling, photorealistic 3D models, haptic interaction, physiology and pathology modelling is still needed to develop the next generation of surgical simulators.

A key skill in orthopaedic surgery (and many other disciplines) is precise drilling. Although there are many applications of drilling in surgery, for this project we are focusing on Dynamic Hip Screw (DHS) operations. A Dynamic Hip Screw is inserted into the femur to correct particular kinds of hip fractures and is a very common operation. A key step in DHS surgery is the initial pilot hole drilled using a long flexible drill bit through the outside edge of the femur and up into the head (rounded ball part) of the hip.

The accurate positioning of this pilot hole is critical, having a knock-on effect for the rest of the operation and its ultimate success. However, achieving accurate placement is challenging, the surgeon cannot see where the tip of the guide wire is and must rely on x-ray imaging to see their progress. This means that, until a surgeon has perfected their technique, they will need to take many more x-ray images - exposing the patient to unnecessary radiation – and the procedure will take longer, increasing the possibility of complications and raising the cost of the whole operation.

For a skilled task like this, there is no substitute for practice and experience. Clearly gaining that experience on live patients has consequences and so virtual reality simulation technology, haptics in particular, can fill the gap. By creating a realistic simulation of the important parts of the operation, junior surgeons can practice repeatedly to hone their skills. Unique to a simulated solution the surgeon can also receive detailed feedback such as position, angle and force applied during drilling or even be guided through the ‘perfect’ operation.
The primary objectives of the HOOT project are:

We are using haptic devices, the W5D from Entact Robotics, to simulate drilling through the bone. In the current version, a 3D printed “drill 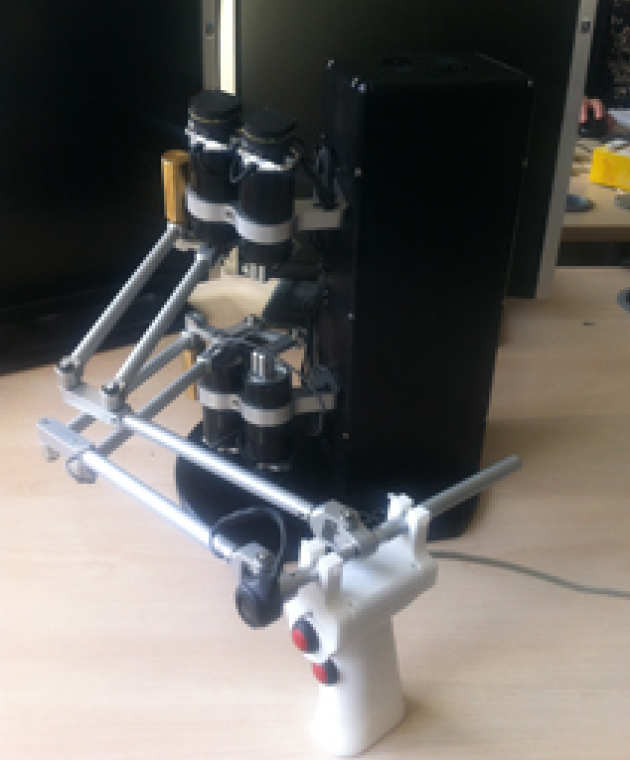 handle” is attached to the haptic device. The handle has buttons and switches on it replicate the control of speed, direction and grip on the guide wire which exist on a real drill and has a simple microcontroller inside to communicate the state of the buttons back to the computer over USB. Uncommonly for typical haptic applications to date, we are using the W5D to produce both linear forces (x,y,z) and rotational forces (torques: roll, pitch, yaw). This is important for the DHS application as a large part of the task skill relates to orientation, and controlling this requires precise torque control of the handpiece. The simulation software calculates and commands forces to the device to give the feeling of touching the bone and drilling though.

The graphical feedback is made up of three windows, one 3D view approximating the view point of the surgeon (currently without and skin/muscle in the way) and two views representing an X-ray image from the front and the side of the patient, recreating the views the surgeon has access to during an operation.

The next phase of the research will focus on improving the realism of the haptic feedback. The algorithms which calculate the drilling and the forces which act on the drill/guide wire will be improved to recreate natural effects such as the difference between different layers of bone and the difficulty the surgeon faces when trying to drill a new hole close to another – the guide wire tends to ‘slip’ back into the first hole.

Following these improvements, we will conduct a pilot validation study investigating how the simulator is perceived by experienced surgeons and what the level of similarity is compared to an actual procedure. We will then use this data to direct our work on the next version.

Our current plans for the next version include a two handed (bi-manual) version and a visual-haptic collocated arrangement to replicate the actions involved in the real procedure much more closely.

The HOOT simulator has to date been used by a number of orthopaedic surgeons contributing valuable feedback towards the design and demonstrated at numerous public exhibitions and events.

Cardiovascular diseases or CVD are the number one cause of death around the world. It is estimated that 17.3 million people died from CVDs in 2008. The key advent of pinhole surgery at the end of the 20th century has enhanced the diagnosis and treatment of many major vascular diseases and has become a vital part of vascular health care today. With this approach, patients suffer much less tissue trauma, which leads to faster recovery and reduced treatment costs since they can usually be treated as day surgery cases. Endovascular clinicians require extensive training and practise because endovascular procedures demand dexterity in handling the delicate guide wire and catheter tools and good hand-eye coordination. 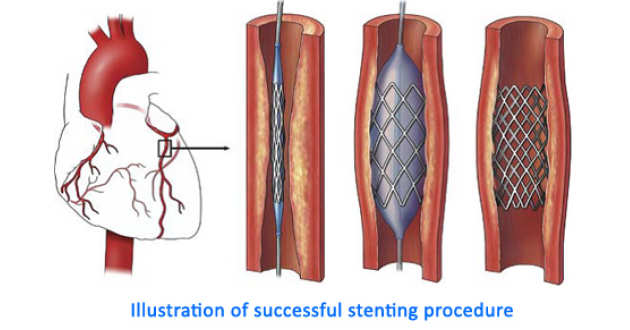 Endovascular clinicians are largely trained using the traditional apprenticeship model where the trainee or apprentice learns first through observation, and then by gradually assisting and performing surgical procedures themselves under the direct supervision of the senior clinician. Several factors such as the increasing costs of time in the operating room have resulted in a need for alternative out-of-the OR training methods such as virtual reality (VR) simulators [5]. These simulators have the advantage of being adaptable to simulate different anatomies, as well as having haptic feedback that helps to recreate the feeling of handling the tools through the sense of touch.

Despite the significant advantages of endovascular surgical training with virtual simulators, there are several factors that cause its use to be less widespread than might be expected. From our initial pilot study, the general consensus among senior endovascular clinicians is that the simulators are still lacking in realism. While the presence of haptic feedback is considered useful, many senior clinicians feel that the type of haptic sensations delivered to the user is still too basic and does not accurately resemble the forces that are felt in real life. This can be due to the fact that hardware and software developers are trying to replicate forces or haptic feedback that they have never experienced themselves, with very little published evidence of the actual requirements for such devices. In this work, an investigation was done on the characteristics of these forces in collaboration with several medical experts. Based on their input, a new haptic interface for endovascular procedures was designed and developed.

The primary aim of this project was to develop a haptic interface for VR endovascular procedures that overcomes the major shortcomings of currently available devices, and that achieves a good balance between simulation realism and cost. It was hoped that the work here would lead to a new generation of haptic interfaces for endovascular interventions that provide a more realistic and effective training experience.

The specific objectives of the project were:

This project has now finished, but we are now working on applying some of the design principles and approaches in a follow-up project (SimCath).

A Patent has been filed and two Papers are currently under review. 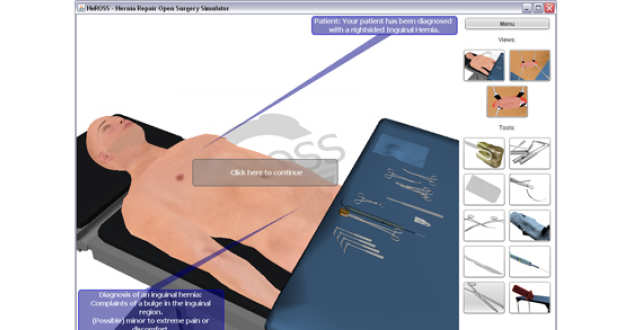 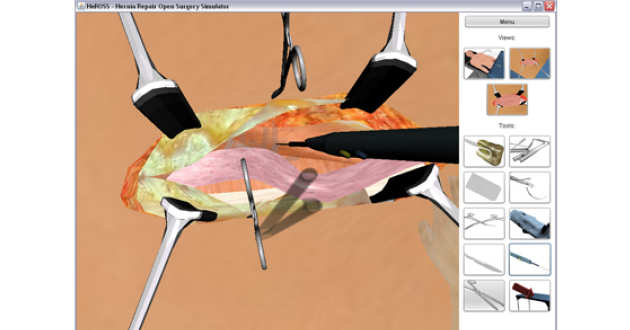 Repair of inguinal hernias are one of the most common surgical procedures. Because it is so common it is often one of the first procedures a trainee general surgeon will practice. In this paper we describe the implementation of a virtual simulation system for training open inguinal hernia repairs. We describe how we implemented user interactions, physical simulation and GUI layout. Our system requires no non-standard equipment, it is operated using a computer mouse.

We propose the implementation of an open surgery simulator, for training junior surgeons. We chose the open repair of inguinal hernias, as it is one of the most common surgical procedures. Some of the primary difficulties of learning the procedure are remembering all the tasks involved in the procedure, and knowing the spatial relationships of the anatomy involved. We believe that 3D visualizations address the teaching of spatial relationships well. The tasks are taught by forcing users to perform each task correctly in the correct order.

The aim of developing a simulator that can run without the need of specialized hardware on most available computers was me. The system runs in Java and is compatible with all major operating systems. We have focused mainly on teaching users the tasks and order of tasks involved in the procedure, as well as the anatomy and its spatial relations. The simulator has been validated through a seriers of studies with Initial feedback from both senior consultant surgeons and junior trainees positive.

For further information on our research projects or current opportunities, please contact: