Cold-formed, thin-walled construction used to be limited to applications where weight savings were of primary concern, such as aircraft and automotive industries. However, following improvements in manufacturing techniques, corrosion protection, product availability, understanding of the structural response and sophistication of design codes for cold-formed sections, light gauge construction has become increasingly widespread, offering a number of advantages over hot-rolled sections, with the principal appeal relating to their lightness and high strength to weight ratio. Compared to timber, with which cold-formed steel competes for light structural applications, the steel has more consistent material properties, is dimensionally more accurate and can span greater distances.

The primary focus of the research conducted in Imperial College is the investigation of the structural behaviour of cold-formed steel flooring, wall and purlin systems, taking into consideration the beneficial effect of interaction between structural components. The group working on this research topic involves Professor Leroy Gardner, Professor David Nethercot, Dr Pinelopi Kyvelou, Nathan Vella and Constantinos Kyprianou.

Numerous experiments have been conducted on typical flooring systems comprising cold-formed steel beams and flooring panels, considering the typical screw fixings employed in current practice as well as alternative means of shear connection, aiming to mobilise composite action within the examined floors and, thus, lead to significant improvements in terms of structural behaviour [1]. 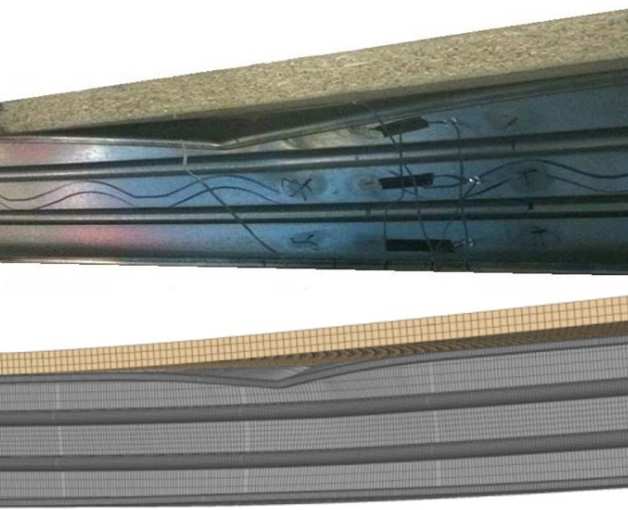 Sophisticated finite element models have been developed, simulating cold-formed steel floor and purlin systems, with the interaction between cold-formed steel members and other components of the systems (e.g. bolts, profiled sheeting, flooring panels) being taken into consideration. The models, which have evolved over the years, include initial geometric imperfections, detailed load-slip responses of the employed fasteners and the nonlinear material stress-strain characteristics with allowance for strength enhancements in the corners of the cold-formed steel sections. Validation of the developed finite element models against a wide range of experimental data has built confidence in the reliability of the derived numerical predictions, which identify key aspects of the structural performance of the examined systems with a high degree of accuracy [2,3]. Hence, a broader pool of data has been numerically generated, enabling further investigation of the structural performance of cold-formed steel systems, exploring areas beyond those considered experimentally.

Based on numerous experimental and numerical results, design guidance for purlin and flooring systems has been devised, developed based on the fundamental concepts of current design methods employed in Eurocodes.

Within the general area of steel structures, there are numerous ongoing research projects and opportunities for collaboration. Applications are welcome at any time of year.

Enquiries may be made to leroy.gardner@imperial.ac.uk