The interdisciplinary nature of our work links chemistry, chemical engineering, materials, pharmaceuticals and biomedical sciences with the overall aim of solving problems of significant industrial and scientific interest. This is achieved by discovering and understanding molecular interactions and using them to help engineer new products and processes. We develop and apply advanced vibrational spectroscopic and chemical imaging methods, including FTIR spectroscopic imaging (in micro/macro ATR and transmission modes), in situ FTIR spectroscopy, NIR imaging, confocal Raman microscopy and tip-enhanced Raman spectroscopy to realise these goals. Multidisciplinary collaborations with colleagues from universities, industry and government institutions play a key role in our research activities.

Congratulations to Huiqiang LU who won the award of £2000 from the Great Britain-China Educational Trust. The latest manuscript by Huiqiang entitled "Intermolecular Interactions in the Polymer Blends Under High-Pressure CO2 Studied by Two-Dimensional Correlation Analysis and Two-Dimensional Disrelation Mapping" has just been accepted in Applied Spectroscopy, congratulations again.

Congratulations to Hannah Tiernan on publication of an article on spectroscopic imaging for the analysis of biopharmaceuticals in Spectrochimica Acta Part A: Molecular and Biomolecular Spectroscopy (doi) that has been featured in GEN (Genetic Engineering & Biotechnology News)

Congratulations to PhD students James Beattie and Cai Li Song, our collaborator Prof. B. Byrne and Prof. S. G. Kazarian for publication of a chapter entitled “ATR-FTIR spectroscopy and spectroscopic imaging of proteins” that appeared in the book “Vibrational Spectroscopy in Protein Research” edited by Prof. Ozaki.

Hannah Tiernan has presented Webinar on ATR-FTIR spectroscopic imaging to investigate distribution of aggregation of monoclonal antibodies at the CPACT (Centre for Process Analytics and Control Technology).

Cai Li SONG has presented Webinar on Cancer Diagnostics with Infrared Spectroscopic Imaging and Machine Learning at the CPACT (Centre for Process Analytics and Control Technology).

Prof. Sergei G. Kazarian has presented a lecture at “Recent Advances in Applications of Spectroscopic Imaging to Biomaterials” at the Symposium ““Challenges in Surface Vibrational Spectroscopy”” at PITTCON-2020 in Chicago, USA

Congratulations to Cai Li SONG on publication of an article on Micro ATR-FTIR spectroscopic imaging of colon biopsies with a large area Ge crystal in  Spectrochimica Acta Part A: Molecular and Biomolecular Spectroscopy   (2020), 228,  117695 (doi) (SELECTED AS A COVER ARTICLE), Open Access for 50 days

We welcome Dr. Matthew Leivers to our group as Research Assistant on the project "Spectroscopic Studies of Biochemical Reactions Between Lipids, Protein and DNA"funded by P&G company.

Prof. S. Kazarian was awarded a “mega-grant” from the Ministry of Science and High Education of Russian Federation for the project entitled "Spectroscopic imaging and advanced vibrational spectroscopy for catalysis and chemical technology" with the Boreskov Institute of Catalysis, Novosibirsk.

Ms. Hannah Tiernan won the best poster prize at the IRDG meeting in University of Lancaster. The title of the poster is “High-throughput ATR-FTIR spectroscopic imaging to investigate secondary structure changes of IgG monoclonal antibodies”

Congratulations to Prof. Kazarian and the whole group, including all former members, for achieving over 10,000 citations on the Web of Science to the publications from the group (while the number of citations on Google Scholar is over 13,500).

Congratulations to Cai Li SONG on publication of an article on spectroscopic imaging in cancer diagnostics in Analytical and Bioanalytical Chemistry, that has been featured at the Department web-page. (doi)

Our group participated in the 2019 Great Exhibition Road Festival across the 29th and 30th of June 2019, where we showcased our research achievements in the field of spectroscopic imaging as well as performed live demonstrations with the participation of visitors using a portable Infrared spectrometer.

Congratulations to Prof. S. G. Kazarian with "2019 LECTURER OF THE YEAR OUTSANDING CONTRIBUTION AWARD", which is in recognition of his outstanding contribution of time and dedication to improving the learning experience of students within the Department of Chemical Engineeringat Imperial College London.

Our group has been selected to present our research at the 2019 Great Exhibition Road Festival across the 29th and 30th of June, showcasing our work to other academics, students and members of the public.

We welcome Dr. Christian Bortolini to our group for a project “On-column monitoring of protein purification by ATR-FTIR and Raman Spectroscopy” funded by BBSRC.

We welcome Mr. James Beattie to our group for a PhD project “Monitoring of protein purification by spectroscopic techniques” which will be a collaborative project with GSK and the Department of Life Sciences.

Congratulations to Alessandra Vichi who has successfully defended her PhD Thesis entitled “Degradation of polymers in objects of museum collections at the micro-scale: a novel study with ATR-FTIR spectroscopic imaging”

We welcome Mr. Huiqiang Lu to our group for a PhD project “Interactions of high pressure CO2 with polymers”

An interview with Prof. Kazarian by Spectroscopy Editors about our recent research (9 April 2018)

Prof. Sergei Kazarian was recently selected as Editor-in-Chief of Applied Spectroscopy. His term will begin in the summer of 2018.  Prof Kazarian has been Editor of the journal since 2017 and he has been an Associate Editor since 2012.

Prof. S. Kazarian met with Prof. Yuri Oganessian (on the right) at the Royal Society. Prof. Y. Oganessian is considred one of the world's leading scientists in super-heavy chemical elements. He is the only person living to have an element named after him, element 118 Oganesson.

Congratulations to Dr. Tay Feng Huai, a former PhD student and postdoc in our group, for winning the Entrepreneurial Award 2017-2018 in the prestigious Study UK Alumni Awards. Feng did his final-year research project in our laboratory in 2005-2006, for which he was awarded the Henry Sawistowski Travel Fellowship for the best final year research project. His PhD project  (2006-2010) was supported by EPSRC and by the Deputy Rector’s Award. Feng was awarded the prestigious Dudley Newitt Prize for Experimental Excellence for his “PhD thesis of exceptional merit demonstrated by experimental excellence and presentation” in 2010. Feng has maintained contacts with our group while in Malaysia, and has attended alumni events, such as the Imperial Festival Alumni Reunion.

Andrew Ewing and Sergei Kazarian  have published an invited article titled “Recent advances in the applications of vibrational spectroscopic imaging and mapping to pharmaceutical formulations”  in  Spectrochimica Acta Part A: Molecular and Biomolecular Spectroscopy (2018) (doi), where a perspective of the current state-of-the-art of terahertz, NIR, FTIR spectroscopic imaging and Raman mapping for studying pharmaceutical samples are presented.

Our recent invited Prospective article “Current trends and opportunities for the applications of in situ vibrational spectroscopy to investigate the supercritical fluid processing of polymers” is published in the Journal of Supercritical Fluids (2018) 134, 89-96  (doi)     https://authors.elsevier.com/a/1Wlm~3BwperLat

We welcome Hannah Tiernan to our group to do a PhD project “Studying Conformational Changes and Agglomeration in Biopharmaceuticals Using Spectroscopic Imaging in Microfluidics”, which will be a collaborative project with Bristol-Myers Squib and the Department of Life Sciences.

We welcome Cai Li Song (MEng graduate from our Department) to our group to do a PhD project “Advancing biomedical research with infrared spectroscopic imaging” in collaboration with the Faculty of Medicine.

Prof. Kazarian presented an invited lecture “Spectroscopic imaging: emerging applications to the objects of cultural heritage” at the international conference on “Novel technologies for conservation and restoration of ancient manuscripts” in Yerevan Armenia at Matenadaran (research institute and museum, as well as one of the largest repository of ancient manuscripts in the world).

James Kimber and Sergei Kazarian have published an invited Trends article in Analytical and Bioanalytical Chemistry (doi) on biomedical applications of spectroscopic imaging, which is Open Access and featured on the cover of October issue.

Prof. Kazarian, jointly with collaborators from Kazan Federal University (Russia) and Harvard University (USA) has published article on Nonlinear Raman Effects Enhanced by Surface Plasmon Excitation in Planar Refractory Nanoantennas in NANO LETTERS (doi) which has been featured in the Department web-site.

Prof. Kazarian gave an interview to TASS (Russian News Agency)  http://tass.ru/obschestvo/4511742 about education in the UK and about UK - Russian scientific collaboration.

James Kimber and Sergei Kazarian, jointly with collaborators in Japan, Armenia and France, have published an article in Chemical Engineering Journal (doi) on combined application of thermal imaging and IR spectroscopic imaging to polymerisation in microfluidics, which is Open Access until 1 July 2017 (https://authors.elsevier.com/a/1V1fw4x7R2KZea)

26 APRIL
Prof. Kazarian has presented a keynote lecture at the 16th European Meeting on Supercritical Fluids in Lisbon, Portugal.

16th JANUARY
Congratulations to Alessandra Vichi on publication of a collaborative article on assessment of cross-sections of samples from a masterpiece painting of the 20th century Alchemy by J. Pollock with of micro ATR-FTIR spectroscopic imaging in Analytical Chemistry (doi) ,which has been featured in the Department web-site.

21st DECEMBER
Our collaborative studies of nanomaterials, which was recently  published in Nanoscale, have been featured at the Department  web-page.

We are presenting our research on chemical imaging of fingreprints at the Imperial Fringe: Criminal Investigations event on the 3rd November from 1700 to 2000 at the college main entrance.  This event is open to all and more details can be found here.

We are presenting our work at the CPACT (Centre for Process Analytics and Control Technology)  Webinar on imaging.

Our group presented its research at the launch of the Institute of Molecular Science and Engineering (IMSE) link.

Our group has been selected to present our research at Imperial Festival 2016 in the Research Zone, showcasing our work to other academics and members of the public. The festival runs on the 7th and 8th of May.

Congratulations to Andrew Ewing for passing his viva for his PhD titled "ATR-FTIR Spectroscopic Imaging to Study Drug Release and Tablet Dissolution".

Sergei Kazarian has presented an invited lecture and Andrew Ewing has presented a poster at the JPAG meeting “Solving problems with spectral imaging” organised by the Royal Society of Chemistry and the Academy of Pharmaceutical Sciences in London.

An invited opinion article  “Seeing the Full Picture” about the potential of FTIR spectroscopic imaging for process analysis has been published in the Analytical Scientist (section In My View ).

Congratulations to  Mr. Mohith Unny for being awarded the Geoff Hewitt Prize for his outstanding performance in last year’s MSc course.  Mohith worked in our group on his thesis entitled  “ATR-FTIR spectroscopic imaging for crude oil studies”.

Professor Kazarian will present a keynote lecture at the APACT16 – Advances in Process Analytics and Control Technology in April 2016.

Congratulations to Dr James Kimber for winning the 2015 Sir William Wakeham Award.  He presented his work at the 2015 Chemical Engineering Postdoc Symposium (Postdoc symposium) and also gave an interview for the departmental newsletter (link).

Congratulations to Andrew Ewing for being awarded the 2015 CPACT Malcolm McIvor Prize for his PhD research on ATR-FTIR spectroscopic imaging of drug release in July  2015 and was presented the award at CPACT Research Day on the 6th of October 2015. Mr. Malcolm McIvor has visited our laboratory on the 14th of December.

Congratulations to Prof. Sergei Kazarian with Sir George Stokes Award 2015 from the Royal Society of Chemistry; these news have been featured at the Departmental and Imperial College web-pages.

We are pleased to announce that on the 26th June 2012 we will be holding a one day conference at Imperial College London under the auspices of the UK Society of Applied Spectroscopy (SAS) Regional Section entitled:

The Research Group was one of three groups in the Chemical Engineering Department to demonstr ate their research at the inaugural Imperial Festival.  The event was open to the public and showcased research from many re search groups throughout the college.  A variety of lectures, activities and live demonstrations ensured the succes of this event.

The Research Group was recently invited by the British Embassy in Russia to showcase our research at the 2011 All Russia Science Festival. This was a great opportunity to present our work to members of the Russian public, schoolchildren and other scientists. The event was a great success and ran from the 7th to 9th of October attracting over 350 thousand visitors across 80 locations in Moscow.

The Research Group was recently invited to showcase our research at the 2010 Royal Society Summer Science Exhibition, where cutting edge research is presented to members of the public.

The exhibition was held at the Southbank centre as part of the Royal Society's 350th anniversary celebrations. 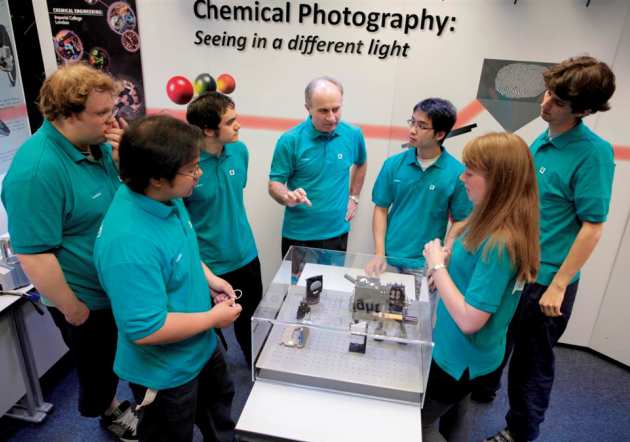 What is our ERC Advanced Research Grant About?