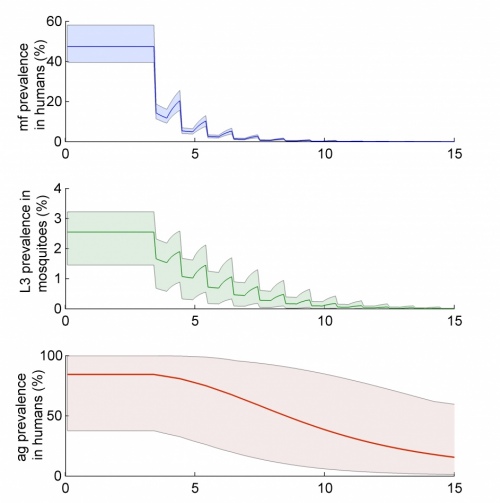 Manoj Gambhir is an Honorary Lecturer at Imperial College London, a Mathematical Epidemiologist at the Centers for Disease Control and Prevention, Atlanta, Georgia, USA and the Head of the Epidemiological Modelling Unit at the Department of Epidemiology and Preventive Medicine at Monash University, Melbourne, Australia (which is where he now lives and works!).

His work focuses on modelling the likely population health impact and cost-effectiveness of control interventions in both communicable and non-communicable diseases. He was previously a lead modeller in the newly-formed Modeling Unit of the National Center for Immunization and Respiratory Diseases, working closely with experts in several infectious diseases, including mumps, influenza, measles, rabies, congenital cytomegalovirus, and pertussis. He worked with teams involved in surveillance and response and designed data-driven mathematical models of the transmission of these diseases to help understand their population dynamics and formulate policy responses. In 2013 A/Prof Gambhir was the Modelling team lead for CDC’s emergency response to the Middle East Respiratory Syndrome coronavirus (MERS-cov) outbreak in the Middle East and Europe, and a senior modeller in the emergency response for the H7N9 avian influenza outbreak in China and Southeast Asia, for which the Modeling Unit was commended with a Director’s Recognition Award.

Prior to this, at Imperial College London, he focused on mathematical and computational modelling of host-parasite ecological systems, particularly those of the neglected tropical diseases (NTDs), to understand control interventions. He has worked with several global public health agencies, including the World Health Organisation’s program for the Global Elimination of Blinding Trachoma by 2020, as well as the Task Force for Global Health, the Carter Center in Atlanta, USA, and the National Institutes of Health, USA. A/Prof Gambhir obtained his BSc from Imperial College London and PhD from the University of Cambridge in Theoretical and Computational Physics. I am a researcher in the disease ecology group at the department of infectious disease epidemiology.

At Imperial, his work involved the construction of models of infection transmission and disease pathogenesis, looking at the transmission of the bacterium Chlamydia trachomatis, some strains of which lead to genital Chlamydia infection and related complications, and other strains lead to ocular infection and the eye disease trachoma. Trachoma is the leading cause of infectious blindness in the world today and is strongly associated with poverty and the lack of economic development. The World Health Organisation has set out an initiative to rid the world of the severe, blinding form of trachoma by 2020 (Global Elimination of blinding Trachoma by 2020 or GET 2020). We, at Imperial, are carrying out this project with the International Trachoma Initiative (ITI), an organisation working to implement the WHO's recommended strategy for GET 2020 in many trachoma-endemic countries around the world.

On September 27th-28th 2005, Imperial College and the ITI hosted a workshop on the main campus of Imperial in South Kensington, London. The aim of this workshop was to gather together some of the foremost experts on trachoma infection and disease and ask for their input on the construction of models of trachoma transmission and control, for use by ITI. The first day of the meeting was concerned with discussions on research and policy issues, and, on the second day, we came to a consensus on several questions relevant to the construction of mathematical models useful for policy. The report from this meeting is available for download in pdf format.

A second meeting was held in April 2006 in Geneva, Switzerland. The purpose of this meeting was to consult a different group of people--this time policy-makers, control programme managers, as well as some researchers--to ask them specific questions relating to control programmes, their planning, implementation, and monitoring, and how models might be able to help. Our subsequent model development has taken into account much of what was suggested to us at this meeting. A report from this second meeting is available in pdf format.

A report that summarises the main aspects of the model--its salient features and the main results pertaining to control and the GET 2020 goals--is also available here: final Report.