Tiny light bulb in a cell could improve biological devices Light bulb in a cell

Over the last 15 years, researchers have begun to design and develop devices made from harmless host cells such as bacteria, combined with parts such as DNA, RNA, and proteins that can carry out different functions. This work, known as synthetic biology, has the potential to produce a range of new products such as clean biofuels, better pharmaceuticals and improved medical devices.

We think our method will ultimately improve scientists’ ability to test the biological devices that they are developing, making the devices more robust and responsive.

For synthetic biology to be successful, the various parts need to act predictably so that they can perform their assigned tasks. However, adding different components to a host cell can sap its resources, causing it to grow more slowly and changing its behaviour.

To address this problem, a team from Imperial College London have developed a nanoscopic light-bulb, called a fluorescent capacity monitor, which dims when it detects a drain on the resources needed to power the parts of a biological device. The monitor is programmed to continually produce a detectable green fluorescence and it is made from a synthetic gene, which is inserted inside the host cell.

The Imperial team believe the light bulb device is the first to detect and measure the drain on biological components – a concept researchers call burden. The scientists believe their work could lead to better ways of testing burden, which will lead to more predictable, efficient and reliable biological devices. Their study is published in Nature Methods. 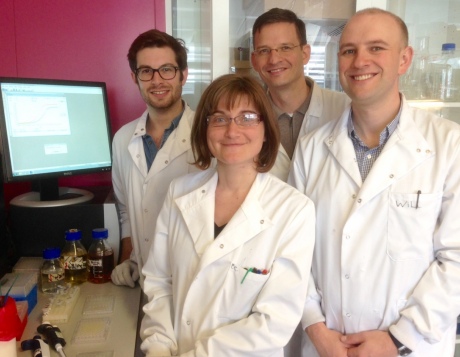 Dr Tom Ellis, co-author of the research from the Centre for Synthetic Biology and Innovation at Imperial, said: “You wouldn’t add a new part to a race car without first testing the burden and stresses it could place on the vehicle as a whole. It’s the same in synthetic biology: it’s important that we understand how adding new components can affect the overall performance of a biological device, otherwise it might fail. We think our method will ultimately improve scientists’ ability to test the biological devices that they are developing, making the devices more robust and responsive.”

In the new study, the team found that host cells experience extra burden when new parts are added into them and go through a period of having to adapt to this, which lasts for around two hours. The team are now in the process of investigating what machinery inside a host cell performs this adaptation, so that they can optimise this process. Ultimately, the team hope that parts can be designed to be able to self-optimise, creating less burden for the cell and improving overall performance of these biological machines.

Dr Guy-Bart Stan, co-author also from Centre for Synthetic Biology and Innovation at Imperial, added: “Our study could have across-the-board impact for synthetic biology as it provides a simple way of measuring burden, which has previously been a sort of mystery effect that everyone knows can mess up predictions of how cells will behave when engineered to do new tasks. We believe our study may also be useful for helping scientists understand how biology has evolved to make the most out of limited resources.”

Dr Rhys Algar, co-author from the Centre for Synthetic Biology and Innovation at Imperial, said: “A major goal is to develop the systems that will enable biological machines to be mass produced. We believe that it is now possible to use our light bulb method to measure the burden of potentially hundreds of parts per day, taking us one step closer to the industrialisation of synthetic biology.”

The team demonstrated the effectiveness of their light bulb by carrying out experiments with a range of different parts. First, they inserted the light bulb in a host cell – E.coli bacteria – and checked that the light bulb produced measurable levels of green fluorescent protein. Next, they added the parts for a biological device - consisting of specific enzymes and other proteins - one by one and left them to grow in the host bacteria. The following day they returned and activated and deactivated each part, using specific sugars, and monitored the light bulb’s brightness. By comparing the fluorescent measurements to the rate of growth of each part, the team could calculate the burden of each part when performing its pre-determined function.

Dr Francesca Ceroni, lead-author from the Centre for Synthetic Biology at Imperial, said: “What is so great about this method is its simplicity. Most research labs already have the equipment needed to make these measurements and as more people do so then the whole research field will improve its predictability towards better engineering.”

The research was funded by the Engineering and Physical Sciences Research Council.

Next week, Imperial will host one of the largest annual gatherings of researchers in synthetic biology at the SynBiobeta conference, which supports and showcases the burgeoning field of synthetic biology.

Foundary of the Future Researchers at Imperial are creating a Foundry that will enable them to design and manufacture biological devices using a robotic assembly line that works in a similar way to those used in modern industrial processes. One of the unique features of the Foundry is that researchers will be able to create accurate, high quality synthetic DNA and use it to control the function of the cell, which would be a major leap forward that would make biological devices function more reliably. The Foundry is co-directed by Professors Paul Freemont and Richard Kitney.