Researchers have found evidence of how ancient Britain separated from Europe, which happened in two stages, they report in Nature Communications.

Nearly 450,000 years ago, when Earth was in the grip of an ice age, ice stretched right across the North Sea, from Britain to Scandinavia. The low sea levels meant that the entire English Channel was dry land, a frozen tundra landscape, crisscrossed by small rivers.

Based on the evidence that we’ve seen, we believe the Dover Strait 450,000 years ago would have been a huge rock ridge made of chalk joining Britain to France, looking more like the frozen tundra in Siberia than the green environment we know today. 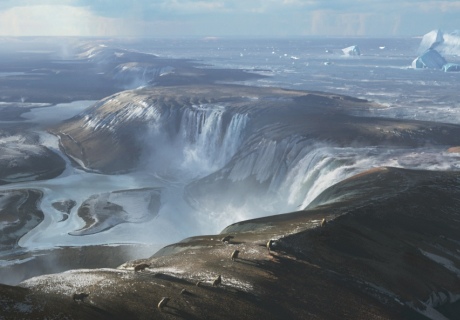 This illustration captures what the land bridge between France and Britain may have looked like. Credit: Chase Stone

Britain’s separation from mainland Europe is believed to be the result of spill over from a proglacial lake - a type of lake formed in front of an ice sheet - in the North Sea, but this has remained unproven. Now, researchers from Imperial College London and their colleagues from institutes in Europe show that the opening of the Dover Strait in the English Channel occurred in two episodes, where an initial lake spill over was followed by catastrophic flooding.

Ten years ago, the researchers from Imperial College London revealed geophysical evidence of giant valleys on the seafloor in the central part of English Channel. They believed these valley networks were evidence of a megaflood gouging out the land, which they speculated may have been caused by a catastrophic breach in a chalk rock ridge joining Britain to France.

The new study by the team, working with their colleagues in Europe, now shows for the first time the details of how this chalk ridge in the Dover Strait, between Dover and Calais, was breached. New geophysical data collected by colleagues from Belgium and France has been combined with seafloor data from the UK showing evidence of huge holes and a valley system located on the seafloor.

Without this dramatic breaching Britain would still be a part of Europe. This is Brexit 1.0 – the Brexit nobody voted for

The team show that the chalk ridge acted like a huge dam and behind it was a proglacial lake. This lake was first hypothesised by scientists more than 100 years ago and the authors of today’s study show how the lake overflowed in giant waterfalls, eroding the rock escarpment, weakening it and eventually causing it to fail and release huge volumes of water onto the valley floor below.

The team believe that the huge holes that they analysed on the seafloor are plunge pools, created when water cascading over an escarpment hit the ground and eroded rock. The plunge pools in the Dover Strait are huge – up to several kilometres in diameter and around 100 metres deep and were drilled into solid rock. Around seven plunge pools run in a line from the ports of Calais to Dover. The researchers suggest these plunge pools are evidence of an overflow of water from the lake in the southern North Sea.

The straight line of the plunge pools suggests they were cascading off one single rock ridge perhaps 32 kilometres long and 100 metres high– the land bridge between Europe and the UK.

The researchers have also found evidence that a second event fully opened the Dover Strait. Later on, perhaps hundreds of thousands of years later, a new valley system, the Lobourg Channel, was carved by megaflood processes that crossed the Dover Strait. The researchers demonstrate that this valley system is connected to the giant valley network in the central English Channel. They suggest that a spill over of other, smaller lakes in front of the ice sheets in the North Sea may have been responsible for the later episode of flood erosion.

Putting the puzzle together

It has taken ten years, but by pulling all the pieces of the geological jigsaw puzzle together the team say they are more confident about what may have caused the megaflood in the English Channel  thousands of years ago. 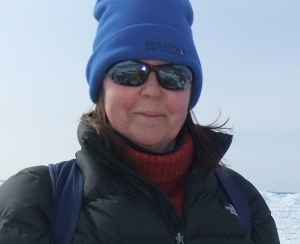 Dr Jenny Collier, a co-author of the study from the Department of Earth Science and Engineering at Imperial College London, said: “Based on the evidence that we’ve seen, we believe the Dover Strait 450,000 years ago would have been a huge rock ridge made of chalk joining Britain to France, looking more like the frozen tundra in Siberia than the green environment we know today. It would have been a cold world dotted with waterfalls plunging over the iconic white chalk escarpment that we see today in the White Cliffs of Dover.

“We still don’t know for sure why the proglacial lake spilt over. Perhaps part of the ice sheet broke off, collapsing into the lake, causing a surge that 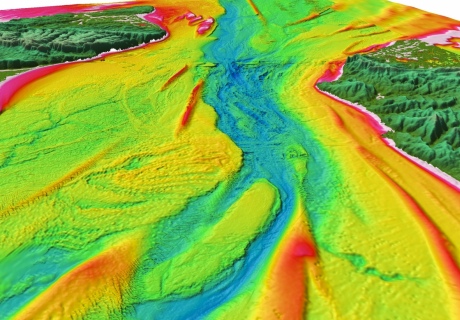 carved a path for the water to cascade off the chalk ridge. In terms of the catastrophic failure of the ridge, maybe an earth tremor, which is still characteristic of this region today, further weakened the ridge. This may have caused the chalk ridge to collapse, releasing the megaflood that we have found evidence for in our studies.”

Engineers first found evidence of the plunge pools when they were carrying out geological surveys of the Dover Strait seafloor back in the 1960s. No one knew what caused them, but they were called the Fosse Dangeard. The loose gravel and sand infilling these plunge pools meant that the engineers had to move the route of the Channel Tunnel to avoid them. In 1985 a marine geologist named Professor Alec Smith, from Bedford College in London, first proposed that the holes were created by ancient waterfalls, but the lack of hard evidence meant that the assertions were largely forgotten. Now, the authors of today’s study say Smith’s original assertions were right.

The scientists say if it wasn’t for a set of chance geological circumstances, Britain may have still remained connected to mainland Europe, jutting out into the sea similarly to Denmark. 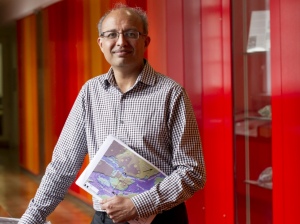 Professor Sanjeev Gupta, a co-author from the Department of Earth Science and Engineering at Imperial, added: “The breaching of this land bridge between Dover and Calais was undeniably one of the most important events in British history, helping to shape our island nation’s identity even today. When the ice age ended and sea levels rose, flooding the valley floor for good, Britain lost its physical connection to the mainland. Without this dramatic breaching Britain would still be a part of Europe. This is Brexit 1.0 – the Brexit nobody voted for.”

The team still do not have an exact timeline of events. In the next step, the researchers would like to take core samples of the in-filled sediments in the plunge pools, which they will analyse to determine the timing of erosion and infill of the plunge pools, the environments represented by these sediments, and the source of the sediments. Developing a timeline of events would enable them to learn more about the distinctive evolution of Britain, compared to mainland Europe. However, this will be a real challenge for the team as getting sediment core samples in the Dover Strait means dealing with huge tidal changes and traversing the world’s busiest shipping lane.