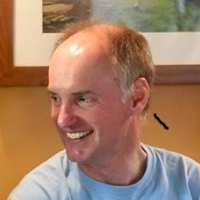 I graduated in 1986 in Mechanical Engineering and today I’m still an engineer. Back then I joined ICI, a huge chemical company at the time that had a large engineering graduate intake and I stayed there for seven years.

After that I worked at Mars confectionary where I spent seven years making Twix. As the Engineer responsible for Twix production I had a great time developing the machinery and got lots of free chocolate!

Subsequently I worked for a couple of other food companies and designed one of my favourite inventions at one of these. I worked for a company that made cakes, fresh cakes with cream and icing.

Now, these needed to be sold in segments in supermarkets but how do you cut a soft, gooey cake into segments? If you use a knife, it squashes it up – the usual method was to use high pressure water. I designed an alternative: a six axis robot with a visual system and an ultrasonic cutting blade.

As the cakes came down the production line they would be photographed, karate chopped by the robot into individual pieces, then wrapped up for sale.  Watching the robot was just visually stunning.

Now I work at FTSE 100 company Johnson Matthey. We are the biggest manufacturer of catalytic converters in the world, supplying 30-40% of the world market. I’m the Manufacturing Technical Manager, so I’m looking after the automation of the machinery.

"I see engineering as a creative endeavor and I get a real kick out of inventing. As an engineer, you’ll always have a job and a sense of achievement, as you’re making things happen and moving the world forward."