The Real-time Assessment of Community Transmission (REACT) programme is the largest, most significant piece of research looking at how the virus is spreading across the country.

The study is being carried out by a world-class team of scientists, clinicians and researchers at Imperial College London, Imperial College Healthcare NHS Trust and Ipsos MORI, and was commissioned by the Department of Health and Social Care.

This study looked at people's behaviours after they tested themselves for coronavirus antibodies as part of the REACT-2 study. The study involved a follow-up survey of almost 9,000 people which was carried out six weeks after they took their test, around half of whom were positive for antibodies and the other half negative. The study didn't find strong evidence that people changed their behaviours after testing positive, in the context of a research study.

The 13th round of the REACT-1 study looked at swab test data from almost 100,000 people in England between 24 June and 12 July. The research found that infections were three times lower in people who were fully vaccinated, compared to unvaccinated people. The data also suggested that people who were fully vaccinated were less likely to pass the virus on to others, due to having a lower viral load on average and therefore shedding less virus.

This study used finger-prick tests (lateral flow devices) to check for coronavirus antibodies in a random sample of 161,500 adults across England. Tests were carried out between 27 October and 10 November 2020. 5.6% of people tested positive for antibodies, a 25% rise compared to previous findings.

The sixth round of the REACT-2 coronavirus antibody survey looked at data from over 207,000 people in England between 12th and 25th May 2021. The study found that almost 100% of adults had coronavirus antibodies 14 days after receiving their second COVID-19 vaccine dose. The research found high levels of vaccine uptake, although coverage was uneven with men, people living in deprived areas, those working in public-facing roles such as retail and hospitality, and people who identify as Black among those with lower vaccination rates.

An interim analysis of data from the 13th round of the REACT-1 study looks at the prevalence of infection in England, based on swab tests carried out by almost 50,000 people between 24 June and 5 July. The results showed that infections continued to grow exponentially during this period, doubling every 6 days, with the R number at 1.87.

An analysis of questionnaire data from more than half a million people surveyed as part of our REACT-2 programme found that 1 in 20, or around 6%, had COVID-19 symptoms lasting 12 weeks or more. That means that more than two million people in England may have had long COVID, a poorly understood condition where people experience persistent symptoms after being infected with the coronavirus. Women, people who smoked, were overweight or obese, or lived in deprived areas, all had a higher risk of experiencing persistent symptoms. The risk also increased with age.

This study explored the use and performance of finger-prick antibody tests with key workers. The study evaluated the accuracy of the tests by comparing performance with other techniques. The study also looked at how easy they are to perform.

17 June - Community infection trends in late May and early June

REACT scientists tested almost 110,000 people between 20th May and 7th June. They found evidence that England's epidemic is growing exponentially, with the prevalence of infection increasing by 50% since the last testing round, from 0.1% to 0.15%. The R number was found to be 1.44. Analysis of positive swabs also found that the majority were the Delta variant first identified in India.

13 May - Community infection trends in April and early May

REACT scientists tested over 127,000 people in England between 15th April and 3rd May. They found that since the study's previous report in March, infections had dropped by half to 0.1% of the population, or 1 in 1000 people. The study also successfully analysed the genetic code of a small number of the positive swab samples, finding that the majority were the Kent variant while two, both in London, were the Indian variant of concern.

REACT scientists looked at coronavirus genetic profiles from swab samples collected between January and March 2021. The majority of infections were with the Kent (B.1.1.7) variant. People infected with this variant were no more likely to report having any of the 'classic four' COVID-19 symptoms, but they were more likely to still have detectable virus antibodies 6 weeks after infection. The study also detected infections with the South African (B.1.351) variant in January, from people who had not travelled internationally, but not February or March. This suggests that this variant was spreading in the community but then faded out over time.

This peer-reviewed study, published in the journal Science, reports findings from more than half a million swab tests taken between May and September 2020 in England. The researchers found that infections declined between May and July 2020 but then increased gradually from mid-August, accelerating into early September 2020 at the start of the second wave. When compared to COVID-19 cases detected through routine surveillance, the study found a longer period of decline and that infections were clustered in younger age groups.

Throughout March, and shortly after the reopening of schools, our study swabbed more than 140,000 people to find out how many people currently have the virus in England, and identify those who have a greater risk of infection. The research found that the rate of new infections levelled off, or plateaued, with 1 in 500 people having the virus (0.2% of the population). This represents approximately a 60% fall since the study's previous findings in February. The study also found that infections are leading to fewer hospital admissions and deaths, which likely reflects the impact of the vaccination programme.

Our study swabbed more than 163,000 people to find out how many people currently have the virus in England, and identify those who have a greater risk of infection. The study reported that 1 in 204 people are infected, or 0.49% of the population, and that the rate of decline has slowed. The study also found that ethnic minorities, health and care home workers, people working in public transport and those employed in schools, universities, childcare and education all had a higher risk of testing positive.

As part of the REACT-2 study, scientists evaluated the accuracy of a number of different finger-prick antibody testing kits to find out if they would be suitable for use in large-scale antibody studies.

Our study of 155,000 people has shown that around 14% of England’s population has evidence of antibodies against the coronavirus, either from having had COVID-19 or a coronavirus vaccine. The study also looked at antibody responses in people who have had the Pfizer/BioNTech vaccine, and people's attitudes towards being vaccinated.

The number of people infected with the coronavirus in England has dropped by over two-thirds since January. But infections are still high with around 1 in 200 people testing positive.

Our study of over a million people revealed a wide range of additional symptoms that are linked with having the coronavirus. Among these other symptoms, chills, loss of appetite, headache and muscle aches were together most strongly linked with being infected, alongside the four 'classic' symptoms.

A very high number of people were infected with the coronavirus in England three weeks into lockdown, with 1 in 64 people testing positive (1.57% of the population).

Coronavirus infections were not falling in the early stages of the third national lockdown in England and 1 in 63 people were testing positive with the virus.

The rate of new coronavirus infections in England was found to no longer be on a downward trend and had flattened in mid-December.

Coronavirus infections were found to be declining in England at the end of November, with R below 1. 1 in 100 people were found to test positive.

Coronavirus infections were continuing to rise in early November but the findings suggested early signs that the rate was slowing down.

The infection prevalence was found to have doubled since the previous round of testing, with 96,000 new infections each day.

Tests on more than 365,000 people in England showed that the antibody response to the virus that causes COVID-19 wanes over time.

An analysis of swab tests taken by 175,000 people between 18th September and 5th October found that the prevalence was rising with the virus infecting around 45,000 people each day.

Infections were found to have increased substantially across all age groups and areas of the country, with 1 in 200 infected.

The study showed a reversal in coronavirus trends, with infections doubling every 7 to 8 days, compared to May and June when infections were halving every 8 to 9 days

An evaluation of a number of different finger-prick antibody testing kits found that the best performing tests are suitable for large-scale surveillance studies to monitor the progress of the pandemic. These could correctly identify individuals with coronavirus antibodies over 80% of the time, while also correctly ruling out those who don’t in more than 98% of tested individuals.

Tests on over 100,000 people showed that slightly under 6% of the population had antibodies to the virus and had likely previously had COVID-19 by the end of June, an estimated 3.4 million people. London had the highest numbers at over twice the national average (13%), while the South West had the lowest (3%).

12 August 2020 - A study to explore how easily people can use antibody self-testing kits at home, and whether these are acceptable to the public

The research showed the prevalence of infection decreased to 0.077%, compared to May’s rate of 0.13% despite some lockdown restrictions being eased in June.

Tests on more than 120,000 people carried out between 1 May and 1 June, prior to the easing of lockdown, revealed that infection rates were significantly falling, dropping by half every 8 to 9 days.

Return to the REACT homepage

If you have been invited to take part in REACT and have a query about the study, please contact our partners Ipsos MORI.

For media or communications enquiries only please contact: Justine Alford

Taking part in the study

We are currently not accepting volunteers for REACT and participation is through invite only.

If you have received a letter to join our swab (antigen) study, click here.

If you have received a letter to join our finger-prick (antibody) study, click here.

How the studies work

Our REACT 1 programme is monitoring coronavirus infection levels over time. Find out how it works here.

Our REACT 2 programme is assessing antibody finger-prick tests and using these to estimate how far the virus has spread. Find out how it works here. 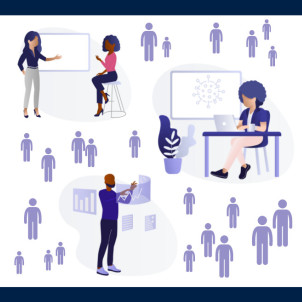 For the public, patients and REACT participants who want to stay informed and involved in our ongoing COVID-19 and Long COVID research.