Sometimes in research you end up working on things that aren't your usual fare; ideas that are a bit strange, may no longer be an active area of research, or that were designed for one specific application and don't generalize well. This page describes some of those projects. Who knows - one day they might get picked up again!

This project was to try to increase the resolution of light-sheet microscopy by essentially taking an optical Fourier transform along the axial direction. It worked by splitting the beam at a sharp interface, and then recombining the two halves using an optical relay. A galvo mirror could change the angle at which the beam struck the sharp interface, consequently changing the period of the interference pattern that was produced. The optical field could then be imaged onto the sample using a microscope. The resulting instrument would then rapidly project a sequence of interference patterns, image the resulting fluorescence using the orthogonal objective, and perform a Fourier transform to reconstruct the axial fluorophore distribution.

The system is essentially a fast version of this paper (which was discovered midway through development). Ultimately there was not sufficient time to complete the project, but a CAD model for the instrument is available upon request. 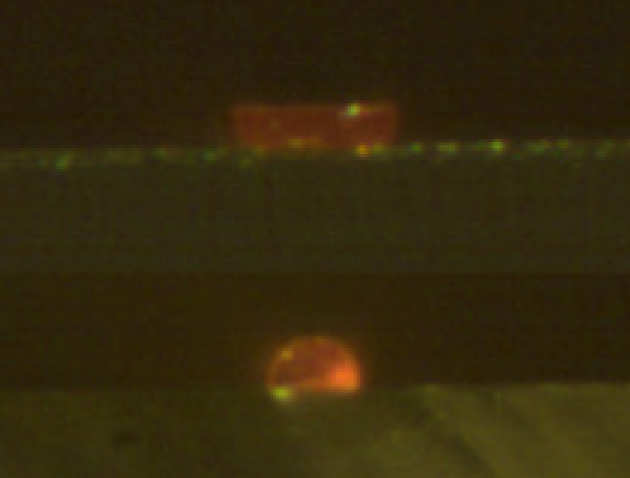 Dr Rowlands' PhD research was on the development of optical chips based on amorphous As2S3, a so-called chalcogenide glass. These glasses are photosensitive in a number of ways; they change optical absoption, refractive index, volume, solubility, birefringence, and many other properties when exposed to above-bandgap light. This means that they can be used to make optical waveguides. Since they change solubility in certain solvents when exposed to light, there is no need for additional photoresist; the desired pattern can be written and the unexposed glass etched away. The etched waveguide is then partially remelted in order to smooth the sharp interfaces introduced by the etching process; this process can be seen to the right. The unmelted waveguide is on top, and the melted waveguide is on the bottom.

The resulting waveguides were the longest observed in the literature, and could incorporate features such as tight bends and Y-splitters.

SPASERs, or Surface Plasmon Amplification by Stimulated Emisson of Radiation, are nanoscale metallic particles that act as a ring cavity for surface plasmons, surrounded by a fluorescent gain medium. They are analogous to lasers; by causing population inversion in the gain medium, it is claimed that that the heavy losses in the cavity can be overcome and the resulting emission, coupled from the surface plasmon to free space, is spectrally narrow and very intense. Importantly, SPASERs exhibit a lasing transition; if pumped below threshold, negligible emission results, but if pumped above threshold, strong, narrow emission occurs.

The lasing threshold is important because it is highly nonlinear. The thresholding effect means that if the SPASER is illuminated with a Gaussian beam of the right intensity, only the very center of the beam will result in lasing; away from the center, the intensity drops, and consequently emission ceases. The result is a narrowing of the point-spread function, which results in super-resolution. Furthermore, there is no need for complicated instrumentation (simply scanning a focussed laser and collecting the fluorescence on a photomultiplier tube is sufficient) and the system automatically produces axially-resolved images.

Unfortunately, we couldn't replicate the results of any nanoparticle-based SPASER syntheses, and development stopped after this paper was published.