Due to Covid-19 pandemic, the Cybathlon 2020 Global Edition saw teams competing for the first time in different time zones and locations.  The teams set up infrastructure in their home towns and filmed the races under the supervision of Cybathlon officials over the 2 day event.

Following the inaugural event in 2016, the Cybathlon continues to provide a platform to further develop and enhance the field of assistive technology.  Allowing people with disabilities to carry out tasks that might currently seem beyond their reach. 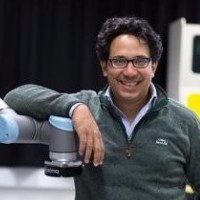 In the 2020 Global Edition, Team Imperial entered in three races. Team Imperial which is made up of researchers in the faculty of Engineearing and volunteer pilots who specialise in developing mobility devices and neuroprostheses.

Pilot Johnny Beer, who is paralysed in both his legs, participated in the functional electrical stimulation (FES) bike 1200 metres within eight minutes.

FES uses electrodes on the skin or as implants to make muscles contract, allowing paralysed muscles to move again. Whoever gets the furthest in the shortest time wins the race, and pilots can control the power supply to the muscles themselves and thus regulate their speed depending on their endurance. Johnny raced with a  a bike made by Dutch company Berkelbike.

Team leader Nat Wannawas of Imperial’s Department of Bioengineering said: “FES gives paralysed people control of their muscles again while they are using it. Joining forces with Berkelbike has allowed us to optimise the bike and its interaction with the pilot.”

Johnny, who lost full use of his legs during a trampoline accident, and who won a silver medal in 2016’s Cybathlon using FES, competed from his flat in Aylesbury.

He said: "Cycling gives me back the freedom I lost after my accident. It is important for me to win because it highlights the benefits of advances in technology which can help the spinally injured regain function while accelerating development through increased media coverage. I want to emphasise to all those in a similar position to me that there is hope.”

Pilot Paul Moore, who is paralysed in both his legs, will guide an eye-gaze-led wheelchair through six different tasks that each award points. The team to score the most points wins, with tasks including navigating a slalom, driving up ramps while opening doors, driving on rough terrain, and parking the wheelchair under a tabletop.

The wheelchair drives and navigates itself, led only by the gaze of the pilot and a Light Detection and Ranging (LiDAR) sensor, which builds a virtual map of the environment to help the chair avoid obstacles.

Team leader Mahendran Subramanian of Imperial’s Department of Computing said: “The eye sensors and LiDAR is wonderful, but the most brilliant thing about the chair is its ability to help people. It needs no input from arms or legs – if you can move your eyes, then you can operate the chair.”

Paul, who has been paraplegic for 40 years and is a former Paralympian, is an active wheelchair user. He will be competing from Peterborough United Football Club.

He said: “Although I don’t need an electric wheelchair in daily life, I can certainly see the advantages for longer journeys because I can rest my arms and relax more. I am excited to compete in this race and see just what this wheelchair can do!”

Team leader Irene Mendez, of Imperial’s Department of Bioengineering, said: “We built an arm that combines sensing, control and mechatronics to give a sense of natural movement, empowering users and satisfying their everyday needs. Conrad helps us a lot – we have learned lots, and through his motivating and driving nature he makes our work a joyful experience.”.

Pilot Conrad Christian Bona, who was born without a left hand, will use a sensing prosthetic arm to complete six tasks including cutting bread with a knife, driving a nail into wood using a hammer, and stacking cups. He will also test the arm’s sensory capabilities by trying to identify an object through touch alone with no visual input.

Conrad, who runs an investment fund, competed in a lab at Imperial’s White City campus.

He said: “As a little boy, I was always looking for more functionality from my prosthetic arm but was often disappointed. Through working with the team, it has been great to see how an idea on paper turns into a testable prototype. As a multinational, dynamic team we bring together many different disciplines which add up perfectly.”

All the races were designed to test both the assistive technology and the pilot’s skill in using it.

All images credited to Imperial College London except where otherwise stated.