Imperial team sets off for the Bionic Olympics

A team from Imperial College London will compete in the world's first ever "bionic Olympics", which will be held this Saturday.

The Cybathlon enables people living with severe disabilities to compete in sports, where they have previously been unable to take part, with the help of assistive technologies. 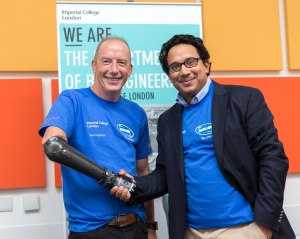 A team of academics and students from the College and their volunteer athletes, called pilots, will be competing in the Cybathlon, which is being held for one day in Zurich Switzerland on 8 October 2016. Amongst the technology in the competition is a wheelchair that the user can control via eye movements, developed by Dr Aldo Faisal from the Departments of Bioengineering and Computing and his team.

The eye-controlled wheelchair could be less mentally taxing for the user, says Dr Faisal, compared to other experimental wheelchairs currently being developed that monitor brain activity. For the past two years Dr Faisal and his team of students have been working on different design iterations.

The team are also deploying the latest in artificial intelligence research called deep learning. This is a computing technique that helps scientists to decode brain signals in new and more powerful ways.

Team Imperial developed an algorithm, based on deep learning principles, which decodes brain signals to control a video game in the Brain Computer Interface (BCI) race (see details below). 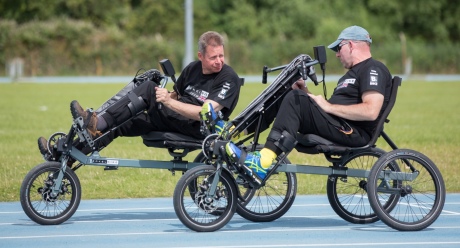 The  Functional Electrical Stimulation bike’s were showcased by Imperial and partners earlier this year. 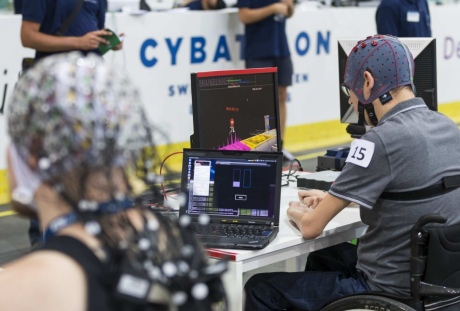 At the Cybathlon, team Imperial, will be competing against 58 teams from 29 countries.  Teams will compete in the Swiss Stadium in Zurich in front of an expected crowd of thousands including family, friends and supporters. The Cybathlon is providing a valuable opportunity for industry and academia to compare and contrast a diverse range of assistive technologies under one roof, which has not been done on this scale before. The hope is that this could lead better assistive technology designs and ultimately, a better quality of life for those living with severe disabilities. 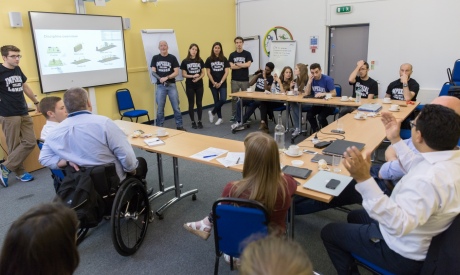 The whole Imperial team at a planning meeting earlier this year

Dr Faisal said: “We still have a long way to go to make assistive technologies easy and natural for people to use .The challenges in the Cybathlon reflect the trials that people living with severe disabilities face, from slicing bread to manoeuvring a powered wheelchair in the urban jungle. It is brilliant that the Cybathlon will widen sporting participation for our pilots who will be putting assistive technologies through their paces, which we hope will lead to advances in the field.”

Dr Faisal likens the Cybathlon to Formula One Racing where the pit crew, consisting of Imperial students, augment and maintain the “car”, which in this case is a range of assistive technologies so that the driver or pilot can compete in challenges. 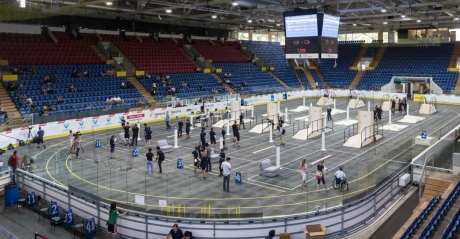 A trial run of the Cybathlon earlier this year

Altogether, the Cybathlon comprises six sporting disciplines and the Imperial team will be competing in three of them including the powered wheelchair race, the brain-computer interface race, the powered arm prosthetic (PAP) race and the Functional Electrical Stimulation bike race.

The pilot manoeuvres the wheelchair across different terrains as part of an obstacle course.  The pilots race against the clock, with the best time winning. Team Imperial has two different types of powered wheelchairs in the competition. One is an all-terrain wheelchair that is controlled by the pilot using a joystick. The other wheelchair has been augmented by the pit crew using off-the-shelf parts so that it can be operated via eye movements.

The pilot wears a skull cap, dotted with electrodes. It picks up electrical signals in the brain, enabling the wearer to control by thought a character in a computer game and negotiate an obstacle course. Pilots are pitted against each other and the person who negotiates the digital obstacles in the quickest time wins.

Pilots use their prosthetic arm to negotiate a range of challenges associated with day-to-day tasks around the home. As the competition progresses, the challenges get harder for the pilots, for example using their prosthetics to complete tasks such as hanging clothes on a line. The pilot with the best overall time wins.

Pilots whose legs are paralysed will cycle around an indoor racetrack on specially configured bikes. An on board computer stimulates their leg muscles electrically, which means that they can pump the pedals. The winners will have the fastest time.  For this race, team Imperial has formed a partnership with Berkel Bikes UK, which is an athletic team of cyclists supported by manufacturers Berkel Bikes.

Professor Anthony Bull, Head of the Department of Bioengineering, said: “It is massive effort to get team Imperial to the Cybathlon, but I know their hard work will be rewarded when the competition begins.

“The Cybathlon builds on a proud sporting tradition in the Department of Bioengineering. Just recently we welcomed home Imperial’s Paralympic bronze medallist Dave Henson, and technology developed by students in this department helped Paralympian Andrew Mullen win bronze in the backstroke.

“We are proud of the team and all that they have achieved to date and look forward to great success at the Cybathlon.”

The Imperial team has been primarily funded by the Faculty of Engineering and the Sports Innovation Challenge, which is run by the Department of Bioengineering, along with a range of industrial sponsors.

The Imperial team won a silver medal in the functional electrical stimulation bike race, alongside their partners BerkleBikes. Pilot Johnny Beer Timms accepted the silver medal on behalf the team.

Team Imperial also made it through to the finals in the powered wheelchair and arm prosthetic races. No other team in the Cybathlon made it into so many finals.

Dr Faisal said: “It was tremendously inspiring to see how the technology could empower our pilots. The Imperial team was the only one to involve students in the lead up to the competition and it is a testament to their efforts that we did so well. With this success we are now planning for the next event in two years-time. Watch this space!”

Going for gold: team leap over next hurdle in lead up to bionic Olympics Imperial team to compete in international bionic sporting championship