7 ways that Imperial is fusing science and fashion

With London Fashion Week in full swing, we take a look at how Imperial is using science to invent the fashion of the future.

From specially engineered garments that grow with their wearer to amphibious clothes, many Imperial academics and students have used their scientific knowledge to develop clothing for the future. Ryan Yasin, a former student from the Dyson School of Design Engineering has designed children's clothes that grow with their wearer. He created Petit Pli with the aim of tackling clothing waste and saving parents money.

The innovative garments can grow by up to seven sizes, to fit children from six months up to three years of age. Ryan created the clothes using a specially engineered fabric with an auxetic structure – this means that when the fabric is stretched, it expands in all directions.

Ryan was a student on the Global Innovation Design course, which is run jointly between Imperial and the Royal College of Art. Former student Yikun Wang invented a bra that alerts the wearer to poor posture. Yikun says that the garment, called Interflex, can precisely measure upper body movement through flexible fabric sensors integrated into the material. These sensors can detect if the wearer has been inactive or sitting incorrectly, and guide them to the correct posture with subtle vibrating pulses along the back and shoulders. Thea Peterson, a postgraduate student from the Dyson School, is developing an innovative new e-textile made from graphene-infused silk. Graphene, which is known as a ‘super material’ is one of the thinnest, lightest, strongest and most conductive materials.

By feeding graphene to silkworms, Thea created silk infused with the material and its properties. This results in a strong, conductive, sustainable material with a range of possible applications, such as creating maternity clothing with incorporated sensors for monitoring blood pressure and baby movements. 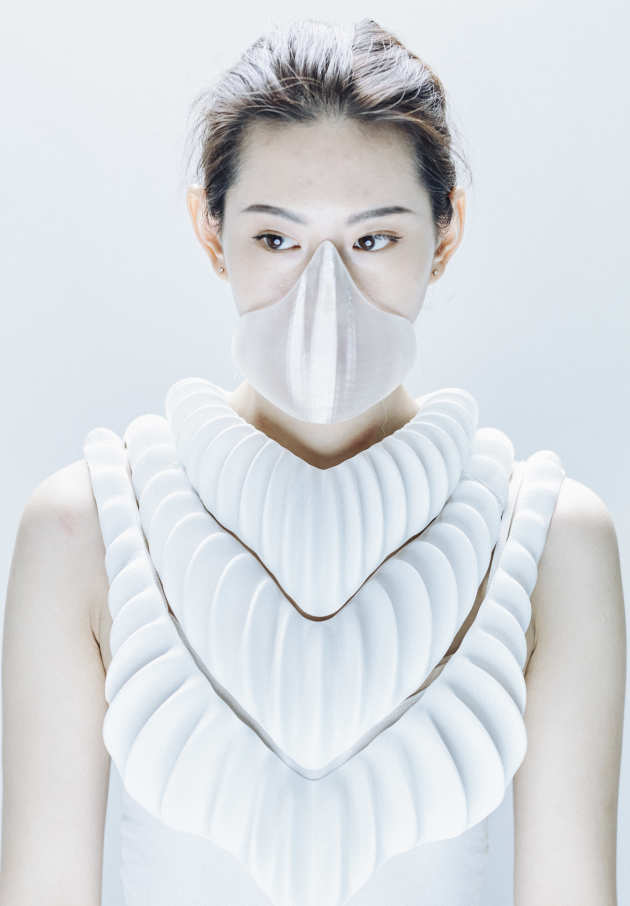 As part of his Innovation Design Engineering final project, former student Jun Kamei developed a porous and hydrophobic material which functions like a human ‘gill’.

Jun said that the material could be used to create clothes that would allow humans to breathe underwater, imagining a future where rising sea levels could mean that humans spend as much time under water as they do on land. Innovation Design Engineering graduate Anisha Kanabar has re-engineered the classical saree to allow free movement and avoid hip problems in later life. Her project Lavanya is a structured petticoat which allows the wearer to walk more easily in a saree.

She says that currently sarees require a slight kicking action to walk without tripping over the front material, which becomes more difficult with age.  Anisha has redesigned the petticoat to allow Indian women to walk in a saree without the need to kick, and without compromising the overall silhouette and traditional aesthetic of the garment. Dr Ali Yetisen from the Department of Chemical Engineering is developing a smart tattoo ink capable of monitoring health by changing colour.

The technology would use the body’s surface as an interactive display, replacing traditional tattoo ink with biosensors that produce colour changes in response to various biomarkers, giving insights into a person’s health, emotions and nutrition. It could potentially tell an athlete when they are dehydrated or a diabetic when their blood sugar rises. Interested in how Imperial brings fashion and science together? Come along to Imperial Lates:Smart Fashion on Thursday 21 February.

During London Fashion week, you can discover what you might be wearing in the future with a chance to try on the latest wearable technology, new textile materials and intelligent clothing.

With wearable workshops, AI fashion consultants and technology trends in trendy technology, dress smart for an evening of smart dress.