Composites encompass a huge diversity of different constituents, architectures and applications, and hence designing with these materials presents considerable challenges, particularly for new adopters. Although the raw materials are expensive, unlike metallics, composites are not as susceptible to fatigue and corrosion, and hence ownership costs for composite components can be superior. The Composite Centre has extensive experience in composite design, ranging from established (such as aerospace) to emerging (such as infrastructure) applications. We have expertise in life-cycle analysis of composites, including recycling, and particularly of modelling of the performance of components manufactured from recycled composites.

Analysis of recycled fibres and composites 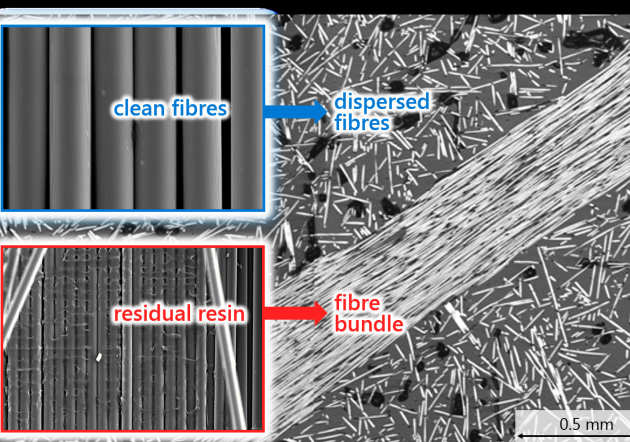 We have analysed state-of-the-art recycled fibres and composites in collaboration with other academics and industry (ELG Carbon Fibre, Boeing). A cornerstone contribution was to show that residual fibre bundles (until then perceived as defects) actually enhance the fracture toughness and damage tolerance of recycled composites. Our work on recycled composites features in five Q1 journal papers, and has been recognised internationally when Soraia won the Tsai Award for Best Student paper (2011), and through five invited presentations in this topic between 2009 and 2018, one book chapter, and two organised sessions at international conferences. 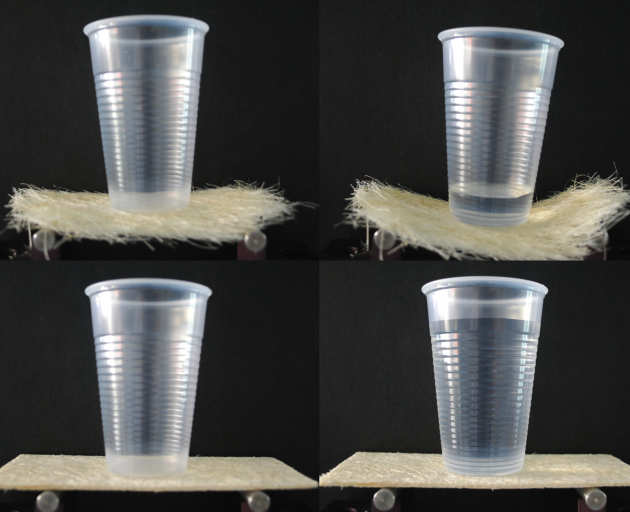 We have developed using our existing EPRSC grants (EP/F032005/1, EP/J013390/1) an elegant, intrinsically scalable and cost-effective technology for binding fibres together in order to create an in-plane non-woven fibre mat, utilising bacterial cellulose (BC) itself a structural reinforcement, with no extra chemical steps involved during the production. It was found that BC provides significant mechanical strength to the sisal fibre preforms. This can be attributed to the high stiffness and strength of the BC network. Truly green non-woven fibre preform reinforced hierarchical composites were prepared by infusing the fibre preforms with acrylated epoxidised soybean oil (AESO) using vacuum assisted resin infusion, followed by thermal curing. Both the tensile and flexural properties of the hierarchical composites showed significant improvements over polyAESO and neat sisal fibre preform reinforced polyAESO. 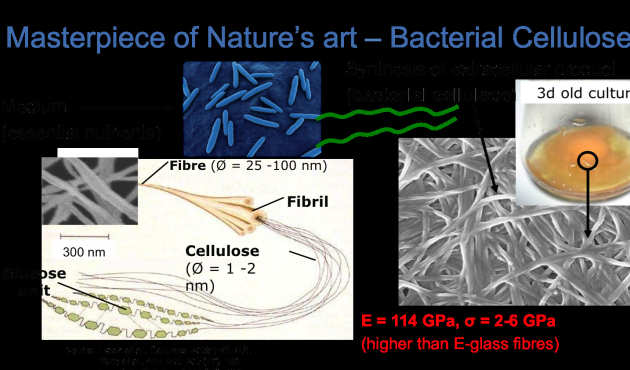 Nanometre scale cellulose fibres, or nanocellulose, are emerging green nano-reinforcements. The major driver for utilising nanocellulose as reinforcement is the possibility to exploit the stiffness and strength of cellulose crystals. Theoretical calculations and numerical simulations estimated that the stiffness and strength of cellulose crystals are as high as 180 GPa and 22 GPa, respectively. Raman spectroscopy and X-ray diffraction have also shown experimentally that single nanocellulose fibre possesses a tensile stiffness of between 100-160 GPa. Tensile strength of a single nanocellulose fibre was estimated to be 1 GPa based on experimental results for elementary plant fibres. Thus, nanocellulose fibres could potentially serve as replacement for glass fibres given their low toxicity and density (~1.5 g cm-3). In my group, we tailor the reinforcement architecture of various types of nanocellulose within the polymer matrix to produce composites for various applications, including transparent armour, membrane for filtrations, thin film composites etc. The research is supported by the EPSRC (EP/N026489/1, EP/M012247/1) and DSTL. 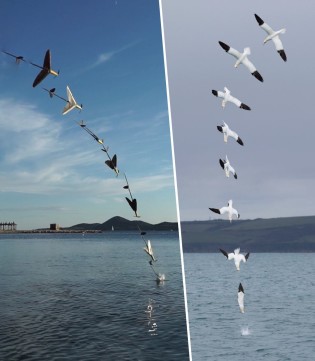 In nature, several animals have evolved design solutions that enable them to successfully transition between water and air, and move in both media. Examples include flying fish, flying squid, diving birds and diving insects. We have reviewed the biological literature on these multimodal animals and abstracted their underlying design principles with the aim of building a robotic equivalent, the Aquatic Micro Air Vehicle (AquaMAV). Our exploration has identified key adaptations from nature and designs from robotics. Based on this evaluation we have proposed key design principles for the design of successful aerial-aquatic robots, i.e. using a plunge diving strategy for water entry, folding wings for diving efficiency, water jet propulsion for water takeoff and hydrophobic surfaces for water shedding and dry flight. Current Micro Aerial Vehicles (MAVs) are greatly limited by being able to operate in air only. Designing multimodal MAVs that can fly effectively, dive into the water and retake flight would enable applications of distributed water quality monitoring, search and rescue operations and underwater exploration. While some aircraft can land on water, no technologies are available that allow them to both dive and fly, due to the dramatic design trade-offs that have to be solved for movement in both air and water, and due to the absence of high-power propulsion systems that would allow a transition from water to air. 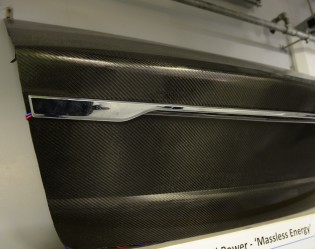 Whilst smart structures are typically made by assembling sandwich structures in which the active components are simply embedded, we have established an alternative concept in which the constituents themselves are multifunctional, acting in synergy to give truly multifunctional materials which inherently perform two (or more) disparate functions simultaneously. Multifunctional materials offer considerable savings in system-level mass and volume, hence contributing to reductions in energy consumption. They are particularly relevant to transport and mobile electronics applications. However, given this field is relatively immature, the design methodologies to facilitate adoption by industry are fairly limited. In parallel with the scientific developments underway at the Composite Centre, we are developing analysis tools to predict performance requirements and design strategies for using multifunctional materials.

Design for next generation of lightweight structures 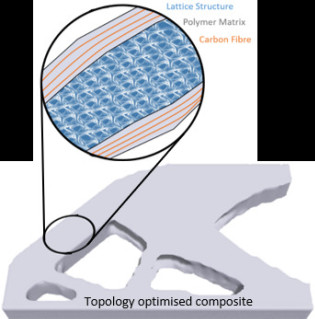 This research aims to realise next-generation lightweight parts and fully utilize the inherent design freedom of additive manufacturing by employing a topology optimised design procedure that includes the anisotropic considerations for continuous fibre printing of variable stiffness composites. In pursuit of polymer-based end-use parts from additive manufacturing this can reduce compliance (i.e. enhance stiffness) and allow for tailored structural performance.

Related challenges include the adaptation of a topology optimization algorithm to account for anisotropic material properties, the generation of adequate fibre path planning (fibre orientation for greatest possible load-bearing capacity) and the development of a multi-material printer capable of realizing such structures. The vital link between these areas, which is considered in this research, are the design aspects that ensure manufacturability. By additionally integrating lattices into this concept we aim to increase the robustness, making designs more attractive to high-performance composite applications. Benefits for a wide range of industries can be expected, especially for aerospace and automotive sectors.

Development of optimisation techniques for composite optimisation. This has been applied to reduced order beam models for aeroelastic tailoring of forward swept wing aircraft and fibre wound cylinders. This work was undertaken with aerodynamic research colleagues at ONERA in France. 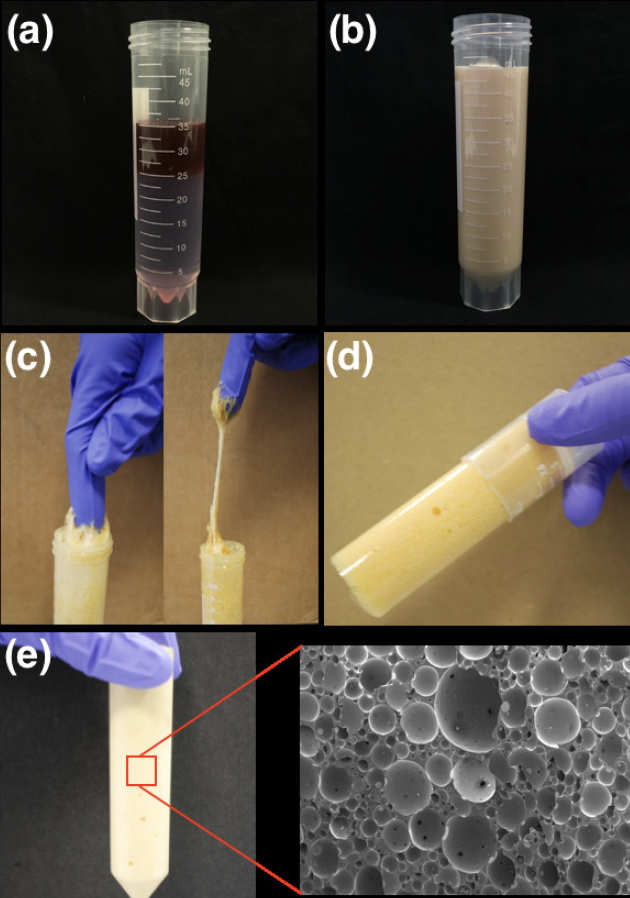 We have previously developed a simple, intrinsically scalable, rapid and waste-free manufacturing process of epoxy foam cores with densities of 0.18 g cm-3 without the need of a blowing agent.  This process is based on the principle of liquid-foam templating technique, whereby an uncured epoxy resin is first mechanically frothed to produce a liquid epoxy foam. This liquid foam, which does not undergo phase separation due to the high viscosity of the epoxy resin, can then be poured, shaped or moulded, followed by curing to produce an epoxy foam core. The previously introduced air bubbles formed the pores or cells of this epoxy foam core. Unlike the production of conventional foam core materials, no expansion or shrinkage occurs during curing. The final shape and geometry of the epoxy foam core is determined by the mould used.