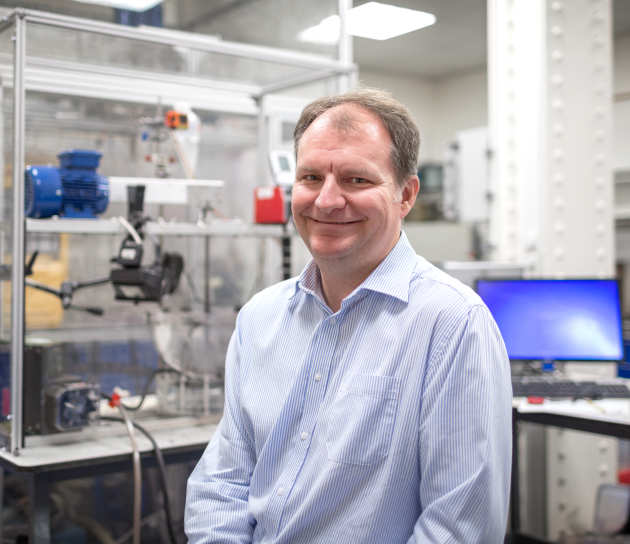 My research in the department of Earth Science and Engineering at Imperial College London involves modelling and simulating minerals processing systems, in particular froth flotation and heap leaching.

Froth flotation is used to separate valuable minerals from the gangue (waste) material. This is achieved through the attachment of the valuable particles to the air bubbles. These fine air bubbles are produced by the shearing action of the impeller and it is therefore important to be able understand these processes.

In this simulation, we look at how the bubbles break up around an impeller spinning at 60rpm (the video is therefore slower than real time). In order to be able to accurately model bubble breakup these simulations include surface tension and contact angles.

An alternative method for producing metals from ore is heap leaching. This involves piling ore into large heaps and then irrigating the surface of the heap with a leaching solution. This fluid then percolates through the heap, leaching the metal as it progressing. Understandings this fluid flow at a range of length scales is thus important.

These videos show the impact of particle scale on the flow behaviour, with the smaller particles resulting in flow structures that are dominated by surface tension, while the structure of the fluid flow through the larger particles is far more influenced by gravity. This is of relevance to heap leaching as these are both within the typical range of particle sizes that might be encountered.

Tumbling mills are the dominant technology for grinding rocks (comminution). Comminution uses about 6% of the world’s electricity production and therefore improving its efficiency is important.

While the Discrete Element Method has been widely used to simulate these systems, this has typically been in the absence of slurry, despite the slurry being known to strongly influence the behaviour of these systems. This is because the coupling of the fluid flow and particle motion is complex.

We have implemented a massively parallel Smoothed Particle Hydrodynamics (SPH) code coupled to a Discrete Element Modeling (DEM) code that is capable of addressing this problem.

This simulation shows a comparison between a DEM only and a coupled DEM/SPH simulation of this stem. The video shows a slice through a 3D mill containing about 100 thousand DEM particles and a few million SPH particles.

Professor Stephen Neethling is a module leader for the Applied Computational Science and Engineering MSc.