To a very good first order seismic wave propagation can be studied using a one-dimensional structure for the Earth. However, the deviations from this one-dimensional structure are the expression of the dynamical nature of our planet. Starting from a few commonly used reference models, many studies have determined such three-dimensional velocity variations.  In interpreting these anomalies, the general assumption is that the reference model corresponds to an isochemical, thermally vigorously convecting mantle. In our work we have shown that this is likely not correct, and we are exploring what the meaning of the spherical reference models is and whether it would be possible to use physically constrained reference models as seismic reference instead. 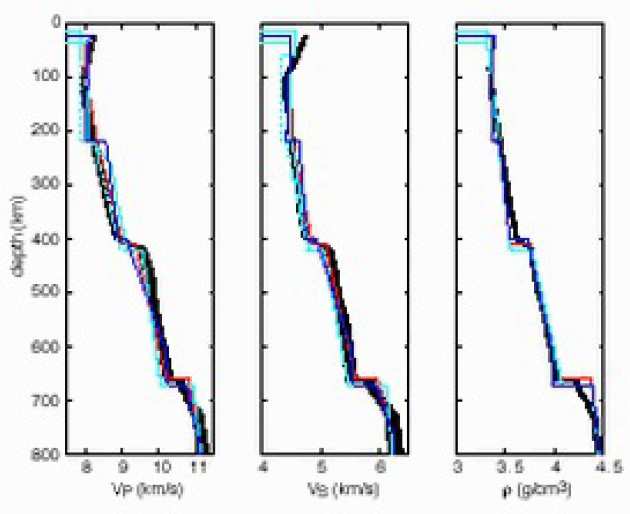 This figure shows a set of reference Earth models based on a pyrolitic adiabatic mantle (potential temperature of 1300oC) using a set of elastic and anelastic parameters that results in a reasonable fit to P and S direct travel times and spheroidal and toroidal fundamental mode central frequencies. These 'PREF' models are compared to commonly used reference models (AK135 and PREM) and the same physical reference model with an average set of elastic and anelastic parameters. Note that only very few mineral parameter combinations are able to yield a seismically acceptable fit. (from Cammarano et al., 2005a,b)

For more information and to download these PREF models, follow this link to Fabio Cammarano's web page.