Gastric bypass surgery alters people’s food preferences so that they eat less high fat food, according to a new study led by scientists at Imperial College London. The findings, published in the American Journal of Physiology—Regulatory, Integrative, and Comparative Physiology, suggest a new mechanism by which some types of bariatric surgery lead to long-term weight loss.

A growing number of obese patients are choosing to undergo bariatric surgery in order to lose weight, with over 7,000 such procedures being carried out on the NHS in 2009-10. The most common and the most effective procedure is the ‘Roux-en-Y’ gastric bypass, which involves stapling the stomach to create a small pouch at the top, which is then connected directly to the small intestine, bypassing most of the stomach and the duodenum (the first part of the small intestine). This means that patients feel full sooner.

The new study involved data from human trials as well as experiments using rats. The researchers used data from 16 participants in a study in which obese people were randomly assigned either gastric bypass surgery or another type of operation, vertical-banded gastroplasty, in which the stomach volume is reduced but no part of the intestine is bypassed. The participants who had had gastric bypass had a significantly smaller proportion of fat in their diet six years after surgery, based on questionnaire responses.

“It seems that people who’ve undergone gastric bypass surgery are eating the right food without even trying,” said Mr Torsten Olbers from Imperial College London, who performed the operations on patients in the study at Sahlgrenska University Hospital in Göteborg, Sweden. 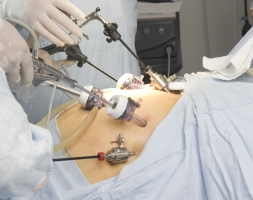 Over 7,000 bariatric surgery procedures were carried out in England on the NHS in 2009-10.

Dr Carel le Roux, from the Imperial Weight Centre at Imperial College London, who led the research, said: “It appears that after bypass surgery, patients become hungry for good food and avoid junk food not because they have to, but because they just don’t like it any more. If we can find out why this happens, we might be able to help people to eat more healthily without much effort.”

The rat experiments suggested that the reduced preference for high fat food was partly due to the effects of digesting the food. There was no difference in preferences between gastric bypass rats and sham-operated rats when the rats were only given access to the bottles for a few seconds, suggesting that bypass rats did not dislike the taste of high fat emulsions when they were only allowed small volumes at a time.

Rats can learn to avoid foods that they associate with illness, so the researchers tested whether high fat foods would condition them to avoid certain tastes. They gave the rats saccharine-flavoured water while infusing corn oil into their stomachs. The gastric bypass rats learned to avoid saccharine, but the sham-operated rats did not, suggesting that the effect of digesting corn oil was unpleasant to the rats that had had gastric bypass surgery.

Levels of the satiety-promoting hormones GLP-1 and PYY were higher after feeding in the gastric bypass rats compared with sham-operated rats, suggesting a possible mechanism for the changes in food preferences. The team at Imperial plan to study the role of these hormones further to see if it might be possible to mimic the effects of gastric bypass without using surgery.