Mars may have been arid for more than 600 million years, making it too hostile for any life to survive on the planet’s surface, according to researchers who have been carrying out the painstaking task of analysing individual particles of Martian soil. Dr Tom Pike, from Imperial College London, will discuss the team’s analysis at a European Space Agency (ESA) meeting on 7 February 2012.

The researchers have spent three years analysing data on Martian soil that was collected during the 2008 NASA Phoenix mission to Mars. Phoenix touched down in the northern arctic region of the planet to search for signs that it was habitable and to analyse ice and soil on the surface.

The results of the soil analysis at the Phoenix site suggest the surface of Mars has been arid for hundreds of millions of years, despite the presence of ice and the fact that previous research has shown that Mars may have had a warmer and wetter period in its earlier history more than three billion years ago. The team also estimated that the soil on Mars had been exposed to liquid water for at most 5,000 years since its formation billions of years ago. They also found that Martian and Moon soil is being formed under the same extremely dry conditions.

Satellite images and previous studies have proven that the soil on Mars is uniform across the planet, which suggests that the results from the team’s analysis could be applied to all of Mars. This implies that liquid water has been on the surface of Mars for far too short a time for life to maintain a foothold on the surface. 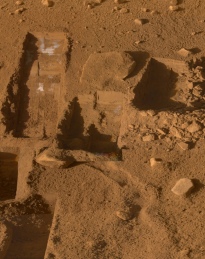 Dr Pike, from the Department of Electrical and Electronic Engineering at Imperial, who is lead author on the study published in the journal Geophysical Research Letters, explains:

“We found that even though there is an abundance of ice, Mars has been experiencing a super-drought that may well have lasted hundreds of millions of years. We think the Mars we know today contrasts sharply with its earlier history, which had warmer and wetter periods and which may have been more suited to life. Future NASA and ESA missions that are planned for Mars will have to dig deeper to search for evidence of life, which may still be taking refuge underground.”

During the Phoenix mission, Dr Pike and his research group formed one of 24 teams based at mission control in the University of Arizona in the USA, operating part of the spacecraft’s onboard laboratories. They analysed soil samples dug up by a robot arm, using an optical microscope to produce images of larger sand-sized particles, and an atomic-force microscope to produce 3D images of the surface of particles as small as 100 microns across. Since the end of the mission, the team has been cataloguing individual particle sizes to understand more about the history of the Martian soil.

In the study, the researchers looked for the microscopic clay particles that are formed when rock is broken down by water. Such particles are an important marker of contact between liquid water and the soil, forming a distinct population in the soil. The team found no such marker. They calculated that even if the few particles they saw in this size range were in fact clay, they made up less than 0.1 percent of the total proportion of the soil in the samples. On Earth, clays can make up to 50 percent or more of the soil content, so such a small proportion in the Martian samples suggests that the soil has had a very arid history.

They estimated that the soil they were analysing had only been exposed to liquid water for a maximum of 5,000 years by comparing their data with the slowest rate that clays could form on Earth.

The team found further evidence to support the idea that Martian soil has been largely dry throughout its history by comparing soil data from Mars, Earth and the Moon. The researchers deduced that the soil was being formed in a similar way on Mars and the Moon because they were able to match the distribution of soil particle sizes. On Mars, the team inferred that physical weathering by the wind as well as meteorites breaks down the soil into smaller particles. On the Moon, meteorite impacts break down rocks into soil, as there is no liquid water or atmosphere to wear down the particles.

This research has received support from the UK Science and Technology Facilities Council; the Danish Research Agency; the Wolfermann-Nägeli Foundation, Switzerland; the Space Center at EPFL, Switzerland; the Swiss National Science Foundation; and the National Aeronautics and Space Administration.

“Quantification of the dry history of the Martian soil inferred from in situ microscopy” Geophysical Research Letter, Vol. 38, December 2011 edition.