Attracting high quality staff to join the team was one of the many challenges faced by a leading Imperial engineer when he was establishing a spinout company.

Professor Nigel Brandon is the Director of Imperial's Energy Futures Lab and also a co-founder of Ceres Power. The company manufactures fuel cell boilers that convert natural gas into electrical energy and heat. They have the potential to cut home energy bills by 25 percent. 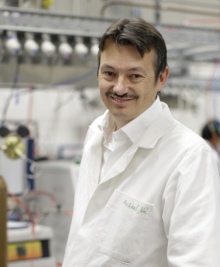 He talks to Colin Smith about the risks and rewards of taking research from the lab bench to the market place.

What is your current role in Ceres Power?
I am a shareholder in the company but have no formal role. However, in the past I've had a number of roles including Chief Executive Officer (CEO), Chief Technology Officer (CTO) and Chief Scientist.

Can you explain in more detail about the product that you are bringing to the market?
Ceres Power, in partnership with British Gas, is developing a boiler powered by a fuel cell that can provide heat and power for homes. The technology would replace a conventional gas boiler, providing heating, hot water and electricity. This is an energy efficiency technology. For a typical UK home it reduces the energy bill by around 25% and saves 1.5 tonnes of CO?per house each year.

What prompted you to establish the company?
My colleagues Brian Steele, John Kilner, Alan Atkinson, and I had developed new type of fuel cell and we recognised a market opportunity with this invention. We formed the company to allow us to scale up our technology and ultimately take it forward into a production.

What has been the biggest success to date for the company?
The company has been established for over ten years, providing high quality jobs in science and engineering over that time period. We are now moving close to the launch of the company's first product, which is really exciting.

What has been the hardest part of setting up a company?
There have been many challenges over the years, but when I was CEO and CTO I would say that the hardest part was attracting the high quality people into the company who were needed to take the business forward. I am pleased to say that many of those that joined the business in its earliest years are still there, often in senior positions.

What advice would you give to academics thinking about commercialising their work?
Go for it! It?s an exciting journey, though admittedly hard work!

What are your plans for the future?
A number of Imperial colleagues and I are currently looking to form a second spin out company through Imperial Innovations. Although we can't give too much away, we plan to build on several inventions across Imperial in the area of energy storage.