Two giant advertising billboard signs have been given over to exhibit a piece of art based on a vital, but little known physics equation.

Two giant advertising billboard signs have been given over to exhibit a piece of art based on a vital, but little known physics equation.

The artwork appears as a 'dazzling little troupe of dancing characters' against a 'motorway blue' backdrop, and beams down on motorists and pedestrians as they make their way through West London for 14 days this November. Written in the international language of mathematics, it depicts quantum physics' Schrödinger equation. 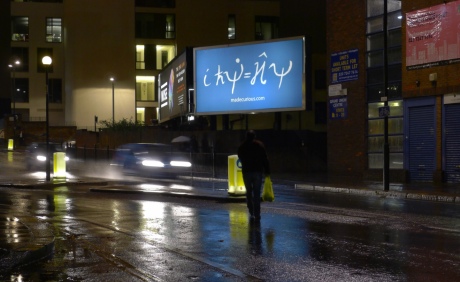 The Schrödinger equation beams down on Ladbroke Grove

The Schrödinger equation has led to much of the technological development of the modern world, for example fibre optics that create the internet's backbone, solar panels, GPS and electron microscopes. It was devised in 1926 following a huge international effort by many scientists, and describes the 'beautiful and surprising' ways that light and matter behave when they interact at the smallest scale.

The artwork was devised by Imperial College London artist-in-residence Geraldine Cox and quantum physicist Professor Terry Rudolph, who hope to communicate a little flavour of the excitement and beauty that scientists see in equations that describe the world around us, and to inspire the curiosity of passers-by.

Geraldine Cox said: "I wanted to create something that was highly visual and simple, yet at the same time said something deeper about the world, something that would make people curious enough to investigate further."

Professor Terry Rudolph, from the Department of Physics at Imperial College London, said: "Our hope is to open a window to share one of our greatest and most iconic equations, one that has enabled much of the modern world. We warmly encourage you to get in touch and ask us questions about physics or the scientific life and we will do our best to answer."

The billboards have been managed by print and project management company Hi Rezz, owned by Kinetic Worldwide. Paul Shields, Managing Director of Hi Rezz, said "It's great to be involved with such an interesting project. Outdoor advertising is great at enhancing changing landscapes such as these along the roadsides in West London and the addition of this poster should hopefully make for some very thought-provoking moments for those passing by."

For more information about the Schrödinger equation and to ask a question about its everyday significance and the physics behind it, visit www.madecurious.com