Researchers develop an Artificially Intelligent (AI) computer program that has itself designed a video game for the Christmas season.

The game developed by the AI computer program is called "A Puzzling Present". In the game, Santa Claus has been sucked into a Christmas present and it is the player's goal to help Santa collect gifts in the 30 Christmas-themed lands, which are filled with deadly holly and other obstacles. 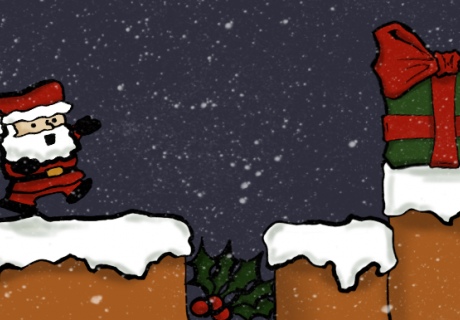 In the game, Santa Claus has been sucked into a Christmas present and it is the player's goal to help Santa collect gifts in the 30 Christmas-themed lands

The inspiration for an AI program that could create games grew out of work at Imperial's Computational Creativity group, which aims to make computers more creative and inventive. The AI program with the tongue in cheek name of "A Novel Game-Evolving Labrat I've Named Angelina" or ANGELINA has developed eight games so far, which are all published on her own website.

Michael Cook, a PhD student from the Department of Computing, says:  "I've played videogames my whole life. I've written videogames my whole life and I am interested in how to get computers to be creative on their own. I wanted to know if you can get a computer to design video games.  In many ways she is like Photoshop or Microsoft Word but when ANGELINA starts running, instead of waiting for me to do stuff, she works on her own. Through the development of a quirky Christmas-themed computer game, ANGELINA demonstrates just how creative computers can be."

Cook has given ANGELINA the ability to be creative by enabling her to work by herself to create levels for games. She does this by harnessing the power of a technique known as 'computational evolution'. Though computational evolution, ANGELINA mimics natural evolution. She starts this process by first creating the landscape for several 'parent' levels for the same game. To create the parent levels, ANGELINA simply scatters a few lines and boxes randomly around the space that she is working in.

After creating the parent levels, ANGELINA runs through their landscapes and then ranks them all according to their difficulty. The levels she ranks as being the most difficult are then combined together into new 'child' levels, which she then tests and ranks again. As the process continues, the quality of each level evolves so that the difficulty and playability of each landscape slowly improves.

Mechanic Miner comes up with ways of solving ANGELINA's levels by looking at the code for each level and then creating game mechanics that overcome the obstacles each level provides. The ability is known as reflection, because the program can 'reflect' on its code as it is running in order to create the game mechanics.

According to Cook, Mechanic Miner's ability to analyse the code for each level ANGELINA creates as the program is running is an important step in ANGELINA's evolution of creativity and game design because it can create new game mechanics all by itself, as it did for the puzzles in A Puzzling Present.

Cook, who will be working on ANGELINA at Imperial College London for at least another 12 months, is very excited about the progress ANGELINA and Mechanic Miner have made. He says:

"ANGELINA and Mechanic Miner have already demonstrated behaviour that is promising when developing creative software. For example, ANGELINA found, and took advantage of, a bug in a game that I wrote - something we see human gamers do. The program has also surprised me through the game mechanics it has discovered. When Mechanic Miner comes up with a game mechanic that a human has already thought of or finds things I could have never thought of, I am surprised and impressed because it's a sign we're heading in the right direction. This is a powerful system."