Sophisticated kit designed and built at Imperial will fly to Jupiter in 2022, when Europe launches its first mission to the giant planet.

A sophisticated instrument designed and built by scientists and engineers from Imperial College London will fly to Jupiter in 2022, when Europe launches its first mission to the giant planet.

The European Space Agency expects JUpiter ICy moons Explorer (JUICE) to reach Jupiter in 2030. It will send information back to Earth so scientists can study the internal structure of Jupiter’s moons, which include Ganymede, Callisto and Europa.

They hope to confirm the existence of a sub-surface water oceans at all three of the moons but in particular study the depth, extent and salinity of the water ocean at Ganymede. 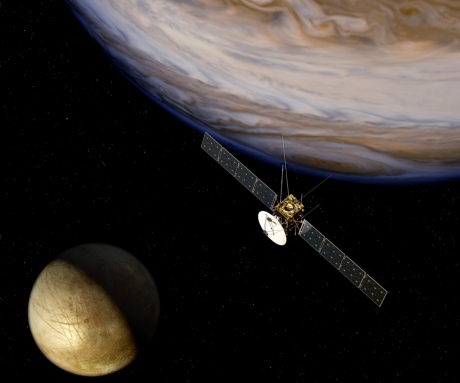 Artist impression of JUICE mission closing in on Jupiter

JUICE will measure the magnetic fields of Jupiter and its icy moons using the magnetometer instrument led by Professor Michele Dougherty, from the Department of Physics at Imperial.

This information will help scientists to make predictions about the habitability of the watery moons orbiting the giant gas planets of Jupiter and Saturn.

Michele Dougherty, who is Professor of Space Physics at Imperial, said: "By studying the icy moons of Jupiter and their subsurface oceans we will be able to better understand the potential habitability of moons around the outer planets.

"It is very exciting to have been selected to build the magnetometer instrument for JUICE. It will enable UK planetary science to continue to consolidate its world-class position following on from the success of the Cassini mission science at Saturn.”

The UK’s involvement in the mission is funded by the UK Space Agency. Scientific teams from 15 European countries, the US and Japan, will lead a host of other scientific experiments to study the gas giant planet.

These include cameras and spectrometers, a laser altimeter and an ice-penetrating radar, plasma and particle monitors and radio science hardware.

Dr Chris Castelli, Acting Director of Science, Technology and Exploration at the UK Space Agency, said, “JUICE is an excellent example of the type of big national missions that UK scientists continue to win key involvement in. With their help, JUICE will make the most detailed characterisation of the Jovian system ever obtained, revealing fresh insights into the habitability of the ‘waterworlds’ orbiting the giant planets in our solar system and beyond."

Throughout its mission, JUICE will also observe the interaction of all four Galilean satellites – the three icy moons plus Io – with the gas giant planet.

The spacecraft will perform a dozen flybys of Callisto, the most heavily cratered object in the solar system, and will fly past Europa twice in order to make the first measurements of the thickness of its icy crust.

JUICE will end up in orbit around Ganymede, where it will study the moon’s icy surface and internal structure, including its subsurface ocean.

The largest moon in the solar system, Ganymede is the only one known to generate its own magnetic field, and JUICE will observe the unique magnetic and plasma interactions with Jupiter’s magnetosphere in detail.

Professor Jo Haigh, Head of Imperial's Department of Physics, said: "Michele's leadership was fundamental in JUICE being selected by ESA as a mission. Now her leadership of the magnetometer team has culminated in this further success for Imperial. I am delighted to congratulate her and the team in the Space Magnetometry Laboratory whose technical expertise and hard work complemented the strong science case laid out in the J-MAG proposal. This is the only UK-led instrument selected for the next Jupiter mission, and it provides a strong platform for future research in Space Physics at Imperial for many years to come."